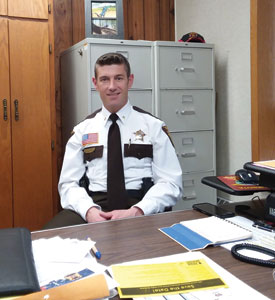 On January 7 of this year, Fillmore County swore in John DeGeorge as its new sheriff. When asked how the transition was going, DeGeorge said, “It’s like drinking from a fire hose! The transition has been going really well. It has been extremely busy, but we have a great staff who have stepped up and kept us moving in the right direction. The support from the public has been wonderful. It’s encouraging to hear from people who are excited about the direction of the sheriff’s office.”

DeGeorge starts his day early, usually before the family is awake, to check emails. He makes notes and plans his day. “I do this so I can get a handle on things before I walk through door. Once I step into the office, I never know what my day may look like. There could be a number of things that can happen. In this line of work, you just never know.”

Prior to serving as sheriff, DeGeorge, age 42, was captain for 11 years, which is third in command. He enjoyed that role, but always said that if the time was right, he’d run for sheriff. “It’s been a humbling experience. There’s an expectation of you and I’m trying my best to live up to it. It makes you do what’s right and that’s always been my goal in life. I’m so grateful to the people of Fillmore County for giving me this opportunity and significant responsibility to serve.”

The biggest surprise so far has been the number of meetings he attends as sheriff. “I had four meetings yesterday with the last one at 8 p.m. I’ve probably been to more meetings in the last three months than in all of my prior 22 years with the department.”

“Although meetings can be time consuming, it’s given me the ability to connect with individuals and groups to listen to what’s important to them,” DeGeorge said. “It also gives me insight into all of the different things that the sheriff’s office is involved in, or asked to be a part of. Eventually, I’ll be able to determine which meetings I can ask my staff to attend instead of me, but right now, I need to be there and learn as much as I can.”

The department has about 50 employees. This includes dispatchers, jailers, support staff, deputies, investigators, maintenance employees, bailiffs and transport officers. According to DeGeorge, every job within the sheriff’s office is challenging in its own way. There’s also an additional layer of stress because of the nature of the business that can sometimes be life and death.

“We need to support our employees by offering positive, supportive leadership, and appropriate training to give them the tools to do their jobs and cope with the challenges they face. As an administration we also need to be clear and honest with our expectations, and hold ourselves to the same high standard that we expect of our staff,” he explains.

DeGeorge says that time management has been the most challenging part of the job. Along with his new duties, he still has cases pending from his time as an investigator. The department also has been two positions short since January. Everyone has been performing extra duties to ensure that the things that need to get done, get done. Two deputies are in training right now to eventually fill those gaps.

He shares, “The most rewarding part of my job is seeing the positive energy from our staff, and having the ability to implement changes that make us more efficient, and more progressive. We have spent a lot of time and energy shaping a vision for the future of the sheriff’s office, and now we can implement that vision!

“We have a few issues that are most significant, and they aren’t unique to Fillmore County. Scams and identity thefts targeting our older population have exploded in the last number of years. Illegal drugs have always been a problem and they will continue to be a problem as long as there is a demand. We need to work harder to educate the public and try to reduce the demand for illegal drugs, along with aggressively pursuing drug dealers and presenting good cases for prosecution.”

DeGeorge is excited about implementing a new crime prevention program, the first of its kind in Fillmore County. “We are presenting a different topic every few months to communities,” he said. “The presentations typically last anywhere from one to two hours and are open to the public. Our first crime prevention presentation was in Lanesboro in March and dealt with scams and identity theft. We had a great crowd and very good interaction. Our next presentation will likely be in June and will deal with illegal drugs.

“We are also in the process of forming a committee to consider our options for the future of the Fillmore County Jail,” DeGeorge said. “We have the second oldest jail in the State and the Minnesota Department of Corrections (D.O.C) has advised us to form a committee and identify what options to consider. The D.O.C. is the regulating body for all county jails throughout Minnesota and they have advised us that our jail cannot operate indefinitely without addressing significant logistical issues with the building itself.”

DeGeorge and his wife Jen live near Rushford. They have a daughter Dana, 13, and a son Grant, age 10. “Our family is doing really well,” DeGeorge said. “I think after the campaign we were so used to being busy that the adjustment to the new job was pretty seamless. The hours can be long and often times I’m fielding concerns or attending meetings/events in the evenings or weekends. It’s definitely not a 9-5 job, but we still make time as a family and enjoy biking, baseball, hunting and fishing.”