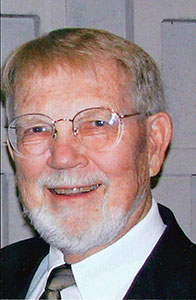 The Reverend Curtis H. Johnson, age 88, died on October 10, 2020, of congestive heart failure at his home at The Waters on Mayowood Road in Rochester, Minn.

Reverend Curtis Hubert Johnson was born November 29, 1931. in Lanesboro, Minn., to Peter and Maria (Jensson) Johnson.  He was baptized on November 29, 1931, into the family of God.  Curtis grew up in Lanesboro, belonged to Bethlehem Lutheran Church, attended Lanesboro Public School, graduating from High School in 1949.  Curtis was active in band and sports throughout his high school years.  He attended St. Olaf College in Northfield, Minn., and played second base for the St. Olaf College Ole Baseball team.  Before graduating from St. Olaf, he was a diamond prospect for the St. Louis Cardinals tryout camp.  Curtis graduated from St. Olaf in 1953 with a major in Greek.  On June 14, 1953, he married his high school sweetheart and fellow Ole, Theresa (Tess) Teigen at Bethlehem Lutheran Church in Lanesboro.  He would say years later that “Tess was most responsible for a long, successful career.”

Other than the fact he wanted to be a coach and big-league ball player, he thought “it would be great to stand in the pulpit and preach the word of God.”  Curtis attended St. Paul Lutheran Theological Seminary in St. Paul, Minn., graduating with a Bachelor of Theology degree.  He served a one-year internship in 1955-56 at First Lutheran Church in Decorah, Iowa.  In July 1957 he received his first call to Bethany Lutheran Church in Thompson, Iowa, for four years and then received the call to St. John’s Lutheran Church in Kasson, Minn., in 1961.  During his ministry at St. John’s, the congregation built a new church and education unit in 1964 and later other additions in the 1990s.

Pastor Johnson was known as a “people person” and he loved preaching the Gospel.  He was involved in all aspects of the church, visitation of parishioners, leading Bible School devotions and singing, playing ping pong with confirmation/Luther League youth, greeting lutefisk supper attendees and so much more.  As an avid sportsman, he loved attending students’ sports events and those involved in the arts saw him at their plays and concerts.

Pastor Johnson retired from St. John’s in January 1996.  During his retirement he did supply preaching and served as a visitation pastor at Blooming Prairie Church.  He was a fan of the MN Vikings, MN Twins, and MN Gophers.  In 1997, the new bell tower at St. John’s was dedicated as an honorarium for Pastor Curtis Johnson for his years of service to St. John’s, 1961-1997.

Curtis and Tess made many trips to Scandinavia and central Europe, hosting trips and visiting family in Norway.  They enjoyed traveling throughout the United States and spending time at the lake in northern Minnesota, as they had done for years with their young family, and eventually spending time with their grandchildren and families, fishing and relaxing.

Pastor Johnson was preceded in death by his parents.

A private family funeral will be held at Czaplewski Funeral Home in Kasson, Minn., at 11 a.m. on Wednesday, October 21, 2020.  You are invited to attend a procession to the Kasson Maple Grove Cemetery (located close to the funeral home) following the funeral and stand by your vehicle during the internment service.  You are also invited to join a live stream of the funeral service on the Czaplewski Facebook page starting at 10:45 a.m. www.facebook.com/Czaplewski-Family-Funeral-Homes-Crematory-336420016774213/.

A sincere thank you to the entire staff, especially the nursing staff at The Waters in Rochester and nurses and staff at Season Hospice in Rochester, for the care of Curtis.

In lieu of flowers, memorials can be addressed to the family for distribution or designated to the donors’ choice.