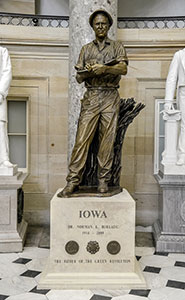 You’ve maybe heard his name, and certainly been impacted by his work. Norman Borlaug was 19 and in Minneapolis when a man asked him for pocket change to buy food, while people were dumping milk in the streets to protest low food prices. As a college student at the University of Minnesota Twin Cities, Norman himself knew what it was like to be hungry.

Some of us may know what it’s like to not have enough food to eat; others may imagine the idea of it. Currently, 25% of the global population is affected by food insecurity (United Nations, 2019). In Minnesota, 9.5% of our population struggles to access nutritious, safe, and adequate amounts of food (USDA, 2017). Food is a basic necessity in life, and people are able to do so much more when hunger isn’t a concern. “You can’t build a peaceful world on empty stomachs and human misery” (Norman Borlaug). Imagine what the world would look like if everyone had access to food. By strategically utilizing policy, science, and education, we can feed a growing population.

A scientist, educator, and advocate: those are three things Norman Borlaug proved to be. After growing up on a farm in Cresco, Iowa, Norman Borlaug attended the University of Minnesota Twin Cities to compete on the wrestling team and to study Forestry and Plant Pathology.

Following graduation, Borlaug moved to Mexico to lead the Cooperative Wheat and Research task force in 1970. The goal was to help Mexico become self-sufficient in wheat production. Wheat yields were low, the crops were threatened by a fungus, and a large portion of the country’s food was imported. Borlaug and his team worked with limited resources and funding that was provided by private donors and developing countries.

Borlaug proposed a strategy that many people doubted: shuttle breeding – a method of simultaneously growing two wheat crops in opposite growing seasons – to selectively breed new generations of wheat plants twice as quickly. Over the course of three years, Borlaug and his team used shuttle breeding to develop a variety of wheat that was resistant to diseases, receptive to fertilizer, and produced greater yields. His work reached around the world.

By 1956, Mexico became self-sufficient in wheat production, and they produced enough crops to make a profit through exports. People in India and Pakistan grew Borlaug’s crop variety to feed their populations as well. Ultimately, Borlaug is said to have touched over a billion lives by preventing starvation. His work earned him the title of ​The Father of the Green Revolution.

Borlaug is an iconic demonstration of what it means to be a humble leader. When his wife received a phone call in 1970 with the news that he had been nominated for the Nobel Peace Prize, Borlaug was working in the wheat fields. When he heard the news, he chuckled, commended the people he worked with and kept working in the field. Until his passing in 2009, he continued to work in developing countries, advocate for GMOs as a method for food security, and share his knowledge as an author, professor, and mentor. Borlaug had a vision to feed the world, and he used his experiences and skills to work towards his vision.

Hunger is a problem that is easy to know when we don’t feel it ourselves. “The Green Revolution has an entirely different meaning to most people in the affluent nations of the privileged world than to those in the developing nations of the forgotten world.” (Borlaug). By 2050, the global population is expected to reach 9.8 billion people, and our food demand will increase by 60%. It will take the work of scientists, teachers, advocates, and humble leaders like Norman Borlaug to feed the world. No matter our background, our world simply needs people who share Norman Borlaug’s vision.

We don’t have to save a billion lives to make a difference. We can help feed the world by supporting science. We improve technology and agricultural methods based on science and research. The beliefs we have, whether or not they are accurate, influence our daily behaviors from the products we buy to the policies we support. We can do the work to ensure our beliefs are based on facts. Agriculture is science at work, and agricultural education fosters a clear understanding of science. We can make a difference, no matter how big or small, by engaging in scientific and agricultural education and literacy to effectively advocate for a world where everyone eats. When we understand the science, we can get to work.