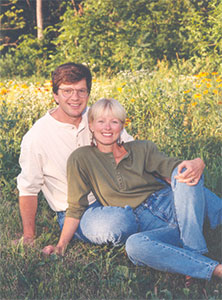 Do you remember the word puzzle about the tree in the forest? If it falls and no one is around to hear it, does it make a sound? Here’s a local twist: If a gifted pianist is playing in a church but there are no people in the pews, is there still music?

That dilemma faced Heidi Dybing, that gifted pianist, last March at the beginning of Holy Week. Heidi had prepared musical selections for Palm Sunday and Easter — always highlights of any church year — to play at Discovery Faith Community in Lanesboro. Then the COVID virus sent everyone in Minnesota into lockdown. Look at the church, look at the steeple, look inside… there aren’t any people.

Heidi felt sad, frustrated, too, but creative people do stuff, so she made a plan. With the help of her husband Phil they recorded the piano music she had prepared for Holy Week and emailed it out to church folks, members of her book club, and a handful of family members and friends. “We prepared music for each day from Palm Sunday through Easter; it would have been a shame not to share it,” said Heidi. “Our church family was disappointed that it wasn’t able to gather in person. This was something we could still do.”

In the days following her musical email, Heidi got email replies. People had listened to her music. They liked it. They thanked her. She sent a follow-up message: “Would you like more of this? ‘Absolutely,’ people said. We decided to do just that.”

That led to the “Weekend Musical Message,” a weekly sharing of piano instrumental selections from the Dybings now going out to email lists totaling more than 250 people. Each Saturday, soothing, inspiring, sometimes just entertaining sounds of hymns, classical music, and modern favorites—from Brahms to Debussy to Sting — are received and enjoyed in homes all around Lanesboro, Preston, Chatfield, Harmony, and beyond.

“We’ve created almost 30 selections already,” Heidi says. “The music has been very well received. People reply with heartfelt messages telling us how a particular song touched them in a special way that week. One lady emailed back saying that a recent song had been played while she walked her daughter down the aisle at her wedding; it brought back sweet memories for her. I wonder each week, ‘who’s listening out there?’ Then we’ll hear from people saying, ‘Thank you for the music, keep it coming!’ We hit home runs every week. People are definitely listening.”

Along with the attached song in the email, Heidi also adds a written paragraph that introduces the music, the song’s composer, and other background information that give the selection context. “I want this to be more than a piano solo,” she explains. “It’s more fun and interesting if you know something about the music you’re listening to.”

The actual recording process is relatively straightforward. Phil and Heidi go to the Discovery Faith sanctuary and use their piano, a Baldwin L Series middle-sized grand piano now on loan to the church. Phil has extensive experience in recording music. He built a professional-quality recording studio in one of their previous homes, produced CDs, and ran a recording business for a number of years. He uses that knowledge and studio microphones to capture Heidi’s selection and then edits and prepares it to be sent out digitally as a convenient MP3 file. “I basically turn on the computer, Heidi starts playing, and we record,” he says. “For some reason we often end up using the second take each week. We’ve very pleased with the sound quality we’re able to capture.”

How does Heidi choose which songs she’ll play?

“Something I hear might trigger a song idea, or something I’m reading,” she says. “Last week Phil and I were watching a TV show based on a classic novel and that led me to choose a classical piece. There’s so much wonderful music out there — we could do a new song each week for the next five years and not come close to running out of possibilities.” Does she take requests? “Occasionally,” Heidi says, “but not often. A friend did ask for a song recently that brought comfort to their family during a loss. I was glad to do that.”

Phil and Heidi send out their weekly song —  it’s fun to picture where that music gets listened to in those homes. “Some people tell us they listen to right away when it arrives on Saturday. Others say they play it on Sunday morning over a cup of coffee during the time they’d normally be at church. A few tell us it becomes dinner background music. Some selections can be soothing before bedtime. Much depends on what the song is that week.”

Different songs, different moods, and all helpful during recent times that have been so stressful for so many, for what seems like so long.

“Music has the power to touch people, to take us to happy places in our memories, where cares are eased and burdens are lightened,” Phil says. “We all need some tranquility these days. The pandemic has been hard on people.”

Heidi agrees. “We need to find things to look forward to right now,” she says. “The music we share is multigenerational and apolitical. That’s important, too.”

The Dybings both bring much experience and teamwork to their weekly task. Heidi has been playing piano her whole life, learning as a child from her mother, Beatrice Burmeister, who gave lessons locally and taught music at Lanesboro Schools for 35 years. Heidi went on to play at church, was musical director at the “Over the Back Fence” radio show for 25 years, and has been an accompanist for local musicians such as “Sister Luv.” Phil has had a successful recording background (one of his CD productions years ago was highlighted in Billboard Magazine), and regularly works as the “sound man” for many local shows and events, including the Stand Still Parade, the Rhubarb Festival, Over the Back Fence, and for groups like the Rutabaga Brothers. “We’ve also produced six CDs of Heidi’s piano instrumentals over the years,” Phil says. “We’re considering creating another CD with this recent music we’ve recorded.”

You can tell that their most recent project is a labor of love. “This is something we can do together as a couple,” says Heidi. “It keeps our hobbies fresh. It also keeps me playing piano regularly, which I probably wouldn’t be doing right now without this. Most important, people are enjoying it. All of it fits together very nicely.”

How long will you keep doing it? “Indefinitely,” Phil answers enthusiastically. “We don’t see an end in sight. It doesn’t cost anything, other than our time. We’re happy to do this.”

The tree fell. The music played. There was sound. And beautiful music to enjoy.

If you would like to receive the Dybing’s “Weekend Musical Message,” please send an email request to HeidiDybing55@gmail.com.