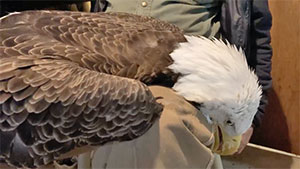 On a frigidly cold Saturday morning, my husband Joe Deden and I held a bald eagle as it struggled for breath. It did not resist our touch as it died in our arms. Watching this death was heartbreaking and powerful.

The previous Thursday morning, Joe was skiing along the Root River when he saw this eagle perched on the lower branches of an oak tree near the river. As he skied past the eagle did not fly off and Joe became deeply concerned that it might be sick or dying.

Friday, after a four-inch snowfall and subzero temperatures, as Joe skied past the oak tree, he saw that the eagle was gone. Impressions in the snow revealed it had hopped down to the river’s edge. Then, in an icy section of deep, fast flowing water, Joe spotted the eagle and assumed it was dead.

Saturday morning when Joe arrived at the river’s edge, he saw that somehow the eagle was closer to the bank. He laid flat on the thin ice and as he pulled, the eagle lifted its head. It was still alive!

Knowing the grasping power of an eagle’s talons, Joe tucked the bird’s wings under its body and carried it up the steep hill to our home. We took turns holding the eagle as we tried to call for help. This beautiful, majestic bird laid on Joe’s lap and just before it died, lifted its head and called out one last time.

We contacted the MN Department of Natural Resources. A conservation officer picked up the eagle to send it Colorado to the National Eagle Repository. He commented on how big the eagle was and that females are larger than males. Instead of this eagle being an “it” we now refer to her as “she.”

The Eagle Repository is the central location for the receipt, storage and distribution of eagles to Native Americans for religious and cultural purposes. The bald eagle is considered one of humanity’s closest relatives.

They fly high, are long-sighted and symbolize strength, courage, wisdom, generosity and are honored for their healing powers.

The cause of her death? Most probably she ingested lead from ammunition or a lead fishing sinker. If lead was the culprit, her death was preventable. As she lay dying on Joe’s lap, I took a 25-second video. In researching what death by lead poisoning looks like, other similar videos looked just like ours.

In 1972 the pesticide DDT was banned, and the bald eagle population made a comeback from near extinction. Now with lead poisoning the death numbers are staggering. Poisoning happens after an eagle ingests a lead fragment as small as a pencil tip. The February 2021 SOAR (Saving our Avian Resources) newsletter reported, “Over 130 different species of wildlife are known to ingest lead ammunition or fishing tackle and die. Scavengers, like eagles and hawks ingest lead when eating fish, game animal carcass or gut piles. Upland birds, like pheasants and doves, plus ducks and other waterfowl mistake lead shot for seeds or grit and eat it.”

Sickness can occur soon after digestion and quickly impair the nervous system, damage vision and hinder breathing. The vision of poisoned eagles makes them become uncoordinated and too weak to fly when foraging on roadkill, and thus get hit by vehicles.

Eagle death numbers are high in December and January and again in March when gut piles become exposed from under snowfall. Hunters have been encouraged to bury gut piles, but mammal scavengers (like coyotes) dig them up and once again, the contaminated meat is bait to avian scavengers.

The University of Minnesota’s St. Paul Raptor Center medical clinic reports they “admit over 150 injured and ill bald eagles each year. On average, 25-30% of these eagles are documented to have lead toxicity… Each year in the upper Midwest alone, over half a million deer are harvested, with lead-based products being the most commonly used ammunition.”

So, WHAT CAN WE DO to prevent these deaths from happening again and again?

• Creating awareness is a direct and powerful action that is available to each one of us. Talk about how lead is poisoning wildlife with your friends, family and members of your community.

My family, like others, hunt and fish and love nature. It has been my experience that outdoor people have a deep reverence and respect for the natural world. Pheasant, duck and deer hunters are some of its strongest advocates. I find it difficult to believe that anyone would intentionally want their hunting or fishing to result in the death of even one eagle.

• Encourage hunters to choose non-toxic ammunition and anglers to clean out their tackle boxes and replace lead sinkers with non-lead, tin, tungsten or steel tackle.

Until recently the higher cost of non-toxic ammunition was thought to be the main reason hunters didn’t switch away from lead. Now the cost has gone down, the performance is enhanced and there is greater availability. An increase in demand for non-lead products could encourage manufacturers and stores to make more options available and bring prices even lower.

• Be attentive when driving. When you spot an eagle, slow down and honk your horn. If traffic conditions allow, pull over and relocate whatever is luring them in. Help them have dinner far off a road. My good friend Sue Schreurs is an avid biker. Before she heads out on a ride, she puts plastic gloves in her fanny pack so she’s ready to remove dead creatures off a highway to prevent scavenging eagles from being hit by vehicles. “The further off the road the better,” she said. “Be careful. Look both ways.”

• Throughout the years there have been attempts to restrict the sale of lead ammunition and fishing tackle. There is no doubt that legislative action would serve as a powerful voice to turn this situation around. That said, the decision to use lead ultimately comes down to each person’s individual choice. Hunters and anglers are in the driver’s seat to take the leadership role right now.

• Could a “buy back” or “exchange” program be initiated to replace lead with non-toxic alternatives? What about reclaiming and recycling lead and putting it to good use?

• Landowners can also alert hunters by posting a “Non-Lead Ammunition Required for All Hunting” sign.

• Seek up-to-date information. Check out SOAR – Saving our Avian Resources, a non-profit in Iowa, the National Eagle Center in Wabasha, Minn., and The International Owl Center in Houston, Minn.

We are hopeful that the death of this one eagle, our glorious national symbol, has the potential to raise awareness and prevent other eagles from this horrible and unnecessary fate. Each one of us can become an agent of change. We can be part of the solution. So, let’s get the lead out!