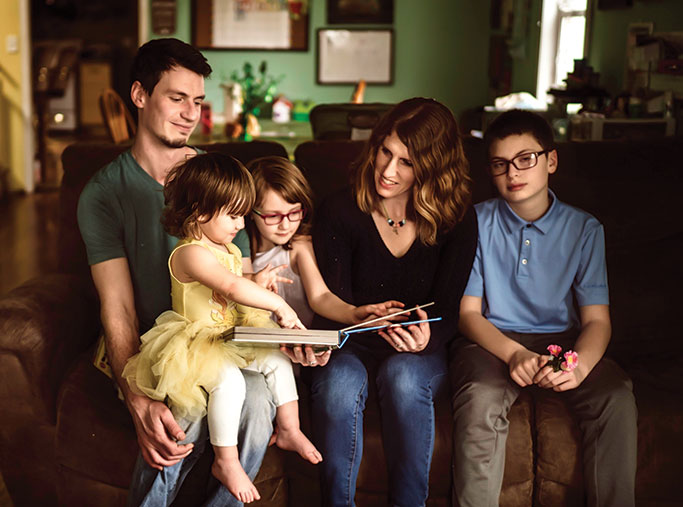 It is springtime in Bluff County and the birds are starting to return, including the bright red Scarlet Tanager from their winter home in South America. Southeast Minnesota is also home to Scarlet Nelson, a petite 1½-year-old girl with wavey auburn colored hair. She is overjoyed that the birds are returning as she loves to watch them fly around outside the family’s home as if they are putting on a private dance recital just for her.

Scarlet lives in Houston with her mom Katie Nelson, dad Malachi Nelson, and two older siblings, Cooper and Violet, where the family has lived for the past 11 years.

Immediately after Scarlet was born her mom noticed a little mark on Scarlet’s right foot. She immediately asked the doctor about it. He did not think it was anything to worry about and advised Katie to keep a watch on it. She mentioned the mark numerous times when she brought Scarlet in for check-ups, but the doctors did not think there was anything to worry about. Katie kept getting told to watch it.

On December 6, 2021, Scarlet was diagnosed with a rare form of cancer, infantile fibrosarcoma cancer, a rare gene mutation that can occur anywhere in the body. According to www.cancer.gov, “the tumor is often large and fast-growing, but it rarely spreads to other parts of the body.” A quick Google search states, “Infantile fibrosarcoma represents less than 1% of all childhood cancers, but it is the most common soft-tissue sarcoma in those under one year of age.”

Within three months of being diagnosed with cancer, Scarlet underwent surgery to have her right leg amputated below her knee.

When I met Scarlet a week and a half later after surgery, you would never know by her bubbly personality that Scarlet was recovering from major surgery. She was in the best of moods, talking up a storm and eating well. When she saw the birds flying around outside, she had to be held so she could watch them. She loves watching birds.

Scarlet’s grandma Diane Bulman shared a dream she had the week of Scarlet’s surgery. Diane saw her little girl dancing just like the birds she likes to watch. Grandma mentioned that she liked dancing as a child but was not able to take dance lessons due to the cost. The dream could be a sign that a prosthetic leg is not going to keep Scarlet from dancing.

The cast on her leg and around her stomach did not keep Scarlet from scooting around on the floor while the adults talked. Katie mentioned that “We are going through lots of diapers as they make sure her leg does not get wet. Her cast will come off on April 8.”

April 12 was Scarlet’s first appointment at the Shriners Children’s Twin Cities pediatric and non-profit hospital. Many trips to the Twin Cities are in the family’s future. There are more surgeries in Scarlet’s future as well as numerous prosthetics. Grandma Diane explained, “This is a life-long journey for Scarlet, as she will need many prosthetics as she grows.”

During the surgery in March, the doctors saved the ends of the nerves in her leg in case of future advances in technology.

Katie has taken a leave of absence from her job at Onalaska Family Chiropractic. Her mom also works for Onalaska Family Chiropractic, so she can take time off to help her daughter. In addition to the family’s understanding employers, the entire community has come alive and is assisting the family so they do not have to go through this journey alone.

The young mom expressed the family’s appreciation and thanks to the community for their generosity, cards, donations, thoughts, and prayers.

On Saturday, May 14 there will be a benefit event to help the family with medical expenses at Rudy’s Bar in Genoa, Wis. The event begins at 1 p.m. and includes great food, a silent auction, and bean bag tournament.

“The local cancer organization provided the family with gifts cards to purchased groceries and gas, which has been very helpful,” shared Katie. The family belongs to Root River Community Church in Rushford and Katie emphasized, “They have been phenomenal. They have provided gift baskets for the kids, meals for us, gift cards, and support.”

Katie’s best friend Tara McConnell set up a meal train for the family. If you would like to help with meals, visit www.mealtrain.com/trains/wz45e0.

Amber Thorson Photography took photos of the family days before Scarlet’s surgery. In the pictures, Scarlet and her big sister are wearing tutus.

It became obvious that when Scarlet came home from the hospital that a wagon would help move Scarlet from place to place, one because the cast is heavy, and the wagon will be needed until she learns to walk with a prosthetic. Getting in and out of the house would be a challenge because of the steps. They now have a ramp, thanks generosity of friends and neighbors.

Morgan Yeager, Morgan’s Caledonia Cleaners, offered to clean the family’s house from top to bottom, wash clothes, etc. The young mom explained that everyday chores like keeping the house clean are difficult to keep up with.

The staff and students at the Houston Elementary School where Scarlet’s older siblings go to school raised $300 in one month for the family.

If you would like to make a cash donation to the Nelson family, please mail donations to PO Box 713, Houston, Minn. 55943.

This precious little girl will be flittering around on the stage before you know it.