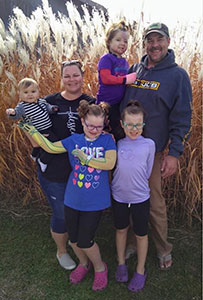 A year ago the Jared and Erin Cords family experienced a devastating fire in which they lost their home as well as all other material things. All of the family members were able to escape the fire thanks to Erin waking Jared and Jared’s quick action to rescue his girls. The girls suffered the most serious injuries. This past year brought many changes and challenges to their lives.

The girls wear compression garments daily; Ravyn wears them over her hands, and Teagan and Peyton  wear a full shirt with sleeves, gloves, and shorts. SPF clothes and hats complete the girls’ ensembles when they play outside as well as a “boatload” of sunblock. According to Erin, the girls are really good about all the necessary clothes. They also need to have lotions applied twice daily to their scars.

All of the girls are now having laser treatments every six weeks on their scars to encourage the growth of new skin, softening and smoothing the scar tissue and improving itchiness of the scarred area. Peyton and Teagan have their laser surgeries the same day, with Ravyn’s laser treatment on her hands only several weeks later. The week after the laser treatments, the girls don’t need to wear their compression garments, which they appreciate, but they do have to have Aquaphor applications four times daily during that time. “It’s a slathering mess,” Erin chuckled. The laser treatments had originally started in March, but COVID shutdowns then delayed them until June. The treatments are expected to continue for the next two years.

Teagan, age 6, has OT (occupational therapy) in Winona once a month as well. The therapy is to stretch out the scarring on her knuckles. Rushford Schools was going to help with the therapy, but distance learning caused by COVID has slowed that down.

Peyton, age 4, who suffered the most severe burns, had surgery on her hands in August. Scars on her hands were contracting so she needed new skin grafts on her hand. Surgeons had a hard time getting the sutures to hold; Peyton had to wear a cast on her hand as she started preschool. When school was in-person, Peyton would attend preschool in the morning, ride the bus home at noon, have a quick lunch, and head to Winona with her dad for appointments. Peyton has physical therapy, occupational therapy, and speech sessions every week. Because her scars itch a lot, she is up at night often.

The Cords family has been renting a home in Brooklyn in Rushford. The family is enjoying living there despite the girls’ leariness of the smell whenever the neighbors burn in their wood burning stove.

While COVID caused some delays in treatments, and the family lost track of how many COVID tests they had to take, it did provide some benefits as well. The Cords girls were not the only kids who couldn’t go to the pool; they stayed home and played with the neighboring girls. The girls enjoyed their summer, playing in their community of seven girls. Erin noted, I don’t think the girls’ recovery would be as far along if they hadn’t had that group of girls!

Ravyn, age 8, learned to ride her bike without training wheels in their quiet cul de sac and was able to take part in a horse camp this summer — the highlight of the summer for Ravyn (she now wants a horse of her own!).

Little brother Triston, who was born in January, is the girls’ “little joy.” Having him join the family helped the girls a lot. Teagan in particular is a “little mother hen” with Triston according to Jared.

All the girls are doing distance learning right now. Erin commented that it is better than it was in the spring. She feels the girls are being taught more, but wishes they could be learning even more.

Peyton will be needing to have neck surgery and further laser treatment to release scar tissue coming up in December. The surgery will be a one day surgery the week of Christmas. Peyton will need many more surgeries in her childhood as she grows. “Things aren’t set in stone, we can’t plan things out,” Erin shared.

Jared and Erin are in the process of building a new home on the same land, but a different site. Plans were held up when they needed to get a variance from the county to build on their location. (It had been considered to be too close to a neighboring feed lot.) Now that they’ve gotten the variance, they’re “pushing dirt” to prepare the building site. Hopefully, construction will begin in spring. Plans for the home are done, but they haven’t had enough time to go and look at it. “All of our calendar is full with the girls’ schedules,” Erin commented.

Erin was a dental assistant in Winona before the fire and Jared was an electrician in Rochester. Jared was laid off from his job because of COVID; he hopes to get back to work in the spring. At this point, both have been kept very busy with their family’s needs.

When asked if there was anything else they wanted to include, Jared responded that he wanted to once again thank all the communities and small towns which have supported them so much with not only material things, but good wishes and prayers. He ended saying, “Merry Christmas to you all from our family!”