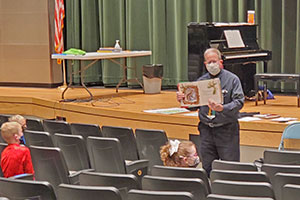 Burt Svendsen, retired R-P teacher, was recently notified via email that he had been nominated by the MSHL for the NFHS (National Federation of State High School Associations) Outstanding Music Educator. As the recipient of this award, Burt now is eligible for further national citation awards presented by the NFHS.

Burt has been involved in music education for over 47 years; he still subs today. He has taught general music at all levels of the elementary as well as band, 5th-12th grade.

After graduating from Wartburg in Waverly, Iowa, Burt taught music in Exira, Iowa. He then moved to Rushford to teach another 38 years at Rushford and Rushford-Peterson. While at Rushford, he returned to college, earning his master’s degree from Northwestern University at Evanston, Ill.

Teaching band in his early years meant being in charge of both marching band and pep band. Svendsen commented, “It was just part of the job.” One of the accomplishments that stick out in his memory was marching with the Rushford band in the Oktoberfest parade and winning first place.

Pep band played at home games 17 or 18 times a year. According to Burt, other band directors would say, “Nobody’s made more bus trips than Burt!” The successful basketball and football teams led to many trips to section and state competitions which then included additional pep band performances. Burt led his pep band for 43 years, all the while he taught.

Although not necessarily a music related job, Burt became a pro at making popcorn. The school needed a group to take charge of ticket sales and concession stand; at the time there were few groups at the school. The band parents were approached to take over the duties. Band parents took over the ticket sales and band members took on the concession stand. Burt felt the students needed an adult supervisor so he took on the position. He continued doing this until he retired; the extra money from the concession stand provided a chance for the band to do things the school otherwise would not have been able to afford. Burt freely gave of his time to help the school and band.

Reflecting on his teaching career, Svendsen said, “It was a good career! I love music — this was one way you could spend much of your life involved in music.” Highlights of his career include having several students through the years in All State Band and having several students who went into music education themselves. Some of his student teachers are now teaching at their own schools nearby.

“I hope I’ve passed on some of my love of music to the students. Music is one of the greatest gifts God gave us. Music touches everybody!’ Burt continued.

Svendsen’s dedication to music continues after his retirement from teaching. After his retirement in 2016 left him with more time and since he had experience in conducting small group competitions, he volunteered to help run small group music contests in region 1A. He now has the title of Section 1A music administrator. He organizes the contests for schools who want him to take on the job. He’s responsible for ordering medals and awards and lining up judges and pianos. He works with the band directors at the schools on room assignments and other details. Recently, the results reporting have been set up electronically so they can be projected to a screen and accessed by the competitors more easily. If COVID hadn’t interrupted the year, he would have been in charge of managing three contests.

Music is important to Svendsen away from school as well. He is a longtime member of the praise band at his church, and has been a member of the Winona Municipal Band for over 30 years, including this summer during COVID. Burt noted that the band was extremely careful to follow social distancing rules as they played at the Winona Bandshell.

Svendsen has been very involved in RASA (Rushford Area Society of the Arts) for over 30 years as well, playing in the pit orchestra, acting and singing in productions as well as working on set construction.

Svendsen’s dedication to music education shows — he is still teaching music after retirement; this week we found him on the job subbing at R-P with lower elementary general music students. Svendsen shared that he subs because he knows how hard it is to find a sub these days, particularly in music. He considers subbing his public service to the area band directors. “I’m not their teacher, but when I come in, I can run a rehearsal and give individual lessons.” Once he even led a high school band in a scheduled concert at the last minute.

MSHL has chosen their nominee well; Burt Svendsen is a man who has devoted his life to music education. The NFHS Music Outstanding Music Educator is an extremely appropriate title for him. Congratulations on receiving this award, Mr. S.!