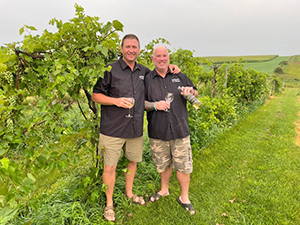 A pair of brothers, Bryan and Kevin Logue, have embarked on a new business venture in rural Fountain, and they recently gave an interview to introduce their business to the community.  Sugar Creek Vineyard and Meadery has been open since the spring of this year, and the brothers say that it’s a case of “so far, so good.”

As a small family-owned business, the Logue brothers wear many hats in their operation, and they rely on help from their families as well.  Although both brothers pitch in on wine-making, Kevin tends to specialize on the care of the vines and growing, Bryan handles most of the marketing and sales.

Kevin noted that the vineyard includes several varieties of grapes that are hearty enough to withstand the harsh Minnesota winters.  Currently, the vineyard includes Itasca, Frontenac Blanc, Breanna, and Prairie Star grape varieties.  Kevin noted that grape growers have to be constantly vigilant for a number of threats to the crop.  When the vines are young, grazing deer are a significant concern.  As the vines get older, fungus becomes more of a worry.  And during harvest time, birds become a pesky problem, as they attempt to steal the ripening grapes.

Both Bryan and Kevin shared that their business is a lot of hard work.  Kevin explained, “You’re got to really enjoy working outside.  Most of the work happens in the vineyard, it doesn’t happen in the winery.  Things in the winery can always wait, but things in the vineyard can’t.”  He said the busiest time is during harvest, and added, “When certain varieties get ripe, you’ve got a window to pick them.  You’ve got to get them in.  And once you get them off the vine, unless you have a lot of refrigeration, you’ve got to get them crushed and stemmed and pressed, and you’ve got to start the fermentation process really quick.”

For those not familiar with the term “mead,” it refers to wines that have honey as a significant ingredient.  Bryan explained that he and Kevin have worked hard to avoid a heavy, sweet honey flavor in their meads.  Instead, they aim for a barely noticeable honey flavor, which enhances the individual flavors of the grapes being used.

Bryan raises his own bees to provide much of the honey needed for mead production, but says when more honey is needed, they buy it locally.  Regarding the number of bees he keeps, Bryan answered, “Ideally, I want to be around 10 to 12 hives.  I had everything up north for quite a while, then I moved it down, and the bees didn’t appreciate that, so a lot of them took off.  So I’m starting from scratch.  I’ve got two really, really big hives, and they’re doing great.”  Bryan added that he aims to “hide” the thick honey taste so that his meads appeal to a wider audience.

One of Sugar Creek’s most popular products so far has been “Meadarita,” a mead that includes jalapeno and lime.  Although the mead smells quite spicy, Bryan explained, “I use the lime zest, I don’t use the rind.  And what that zest does is it pulls that heat off your tongue right away, and it comes back abut twenty seconds later.”  He added that at tasting events, when people hear about Meadarita, “Most of those people who say they’re not going to like it end up leaving with a bottle.”

Bryan and Kevin welcome the community to come out and see them, or talk with them at any of the local wine tasting events they participate in.  Several local outlets have started selling Sugar Creek wines and meads, and more are expected.  Sugar Creek Vineyard & Meadery is located two miles west of Fountain, at 23661 County Road 8.  From now until late autumn, the brothers expect to be open Saturdays 1-8 p.m. and Sundays 11 a.m.-5 p.m.

When asked about their business plan and what goals they have for the future, Bryan stated, “It’s just kind of grown slowly.  We’re both well into our careers and we just want to do it right.  Every week we’ve had more and more people coming.”

Currently the brothers offer five varieties of wine and six types of mead, although they said those numbers will see seasonal fluctuations.  Kevin added, “Our goal is to work on the craft.  Get a good product, make sure people like it.  Figure out what people want, and then if we get a good response, then we’ll grow.”