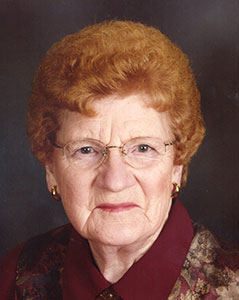 Stella was born February 3, 1929, to Anton and Clara (Sivesin) Rosendahl in rural Dorchester, Iowa. She was baptized and confirmed her faith at the Waterloo Ridge Lutheran Church. Stella attended school in rural Dorchester through eighth grade and later received her GED. She started working at the age of 15, working for Verona Bellon in Eitzen, Minn., and then at La Crosse Dry Cleaners until her marriage. Stella married Elmer H. Burmester on September 27, 1947, at Waterloo Ridge Lutheran Church. To this union three children were born. Together they farmed on the family farm (which became a “Century Farm”) in rural New Albin, Iowa. She worked right alongside Elmer milking the cows, raising chickens, fencing, working in the fields and had a huge garden besides. Stella also worked off of the farm at the Garment Company in La Crosse, Wis., and at Northern Engraving in Spring Grove, Minn., and Lansing, Iowa. Stella and Elmer were long-time members of St. John’s United Church of Christ in rural New Albin, where she was involved in Sunday School, Women’s Fellowship and choir. Stella and Elmer enjoyed antiquing, building and refinishing furniture and attending Colorado flea markets. She retired to take care of Elmer during his battle with cancer. Elmer preceded her in death on July 9, 1995. In 1999, Stella moved off of the farm to New Albin. There she thoroughly enjoyed many hours of quilting, reading, playing cards, volunteering at Thornton Manor, Makee Manor and Northgate Manor; her 500 club, book club and the Senior Group. Her favorite time was Christmas when all of her family would gather in her house! She had the “Best” neighbors who in later years helped her with her snow removal, mail, lawn care and garbage removal. Stella is survived by one brother, Charles (Shirley) Rosendahl of La Crescent, Minn., her three children: Brenda Headington (David Becker) of Decorah, Iowa, Claire Kokoszka of Ft. Lupton, Colo., and Stuart Burmester of New Albin, Iowa; nine grandchildren: Sharlyn (Lynn) Bibler, Daniel (Denise) Headington, Marsha Headington (Chad Nelson), Heather (Adam) Rentz, Annette Kokoszka, Kari (Michael) Listenbee, Krista (Rob) Payne, Corey Burmester and Ellen Burmester; 21 great-grandchildren, and one great-great-grandchild; along with many nieces and nephews.

Funeral services will be 2 p.m., Saturday, October 17, 2020, at St. John’s United Church of Christ, rural New Albin, Iowa. Pastor Paul Burgess will officiate. Burial will be in the church cemetery. Visitation will be Friday, October 16, 2020, from 4-7 p.m. at the New Albin Community Center and Saturday, October 17, 2020, from 1 p.m. until the time of services at the church. In lieu of flowers, memorials may be given to St. John’s UCC. Social distancing and wearing facial coverings is encouraged. Jandt-Fredrickson Funeral Homes and Crematory, Caledonia Chapel, is in charge of arrangements. Online condolences may be sent at www.jandtfredrickson.com.