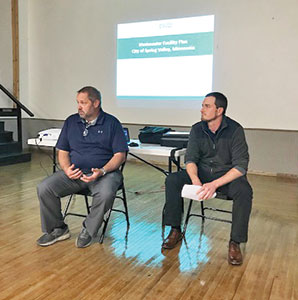 Immediately prior to the regular council meeting, a public hearing was held regarding the proposed improvements to be done at the Wastewater Treatment Plant (WWTP).  Brian Holtz and Jake Pichelmann, both representing the engineering firm of Bolton & Menk, gave a PowerPoint presentation to outline the basics of the plans for the WWTP.

Pichelmann pointed out that one of the main reasons an upgrade is needed is simply due to the age of the WWTP.  It was built in 1987, and for perspective, Pichelmann said that was the year of the Minnesota Twins’ first World Series title.  He explained that the other main reason for an upgrade is to prepare for future changes in regulations.  He said although the exact details are not yet known, it is clear that in the coming years, cities will be required to treat and manage water for some minerals that are not currently required.

The presentation showed an expected cost of roughly $2.2 to $2.8 million for the upgrades to the facility, and another $7.65 million for improvements to the city’s water collection system.  Holtz and Pichelmann outlined that the proposed plan is divided into three tiers, which logically should be done over the course of some years.  They also explained a formula that is used throughout the state to determine a “level of affordability” that is used when making such upgrades, so that water and sewer rates do not create an undue burden on citizens.

Regarding the funding for the proposed WWTP upgrades, Holtz and Pichelmann said that the city would likely qualify for low-interest loans and grants.  Funding eligibility will be known at the end of September 2020.  No citizens spoke up during the public hearing.  During the regular council meeting, the council approved the WWTP upgrade plan as proposed.

The council heard from Joe O’Connell, who attended to respond to some questions from the council regarding a housing project (subdivision) he has underway in the city.  O’Connell said he’s “not making excuses” but stated that he ran into some delays due to a contractor working for him.  He added, “The next house is sitting at my place at home, and my movers promised me that right around the fourth of July, it’s going to be coming to town.”  He also said a third house will be coming soon.  The council consensus was that all significant concerns were being addressed.

The council approved a request to allow the Chamber of Commerce’s annual Ag Days event to have a raffle permit, temporary liquor license, fireworks permit, and dance permit.  The council also approved the lower bid (from Phil Sheldon, $3,942) for replacement of the air conditioning system at the community center.  Funds for this are available in the city’s Capital Improvement fund.  Approval was also given for “Music in the Park” on two Fridays in July.

Chris Danielson gave an update on the efforts to gradually reopen the public library.  She said, “July 29, they’re going to begin to offer, you can come in and browse for 30 minutes, and that’s by appointment only.” She explained that the library is currently operating with one position vacant, so because of that, and for the safety of patrons and staff, “That will be going very slowly starting July 29.”  The open position will be posted for applications.

Sheriff’s Department Officer Jess Betts said UTVs continue to be a concern within city limits.  He stated, “With the extreme popularity of UTVs around town, we’ve been trying to do some more outreach… to make sure everyone knows that you need a permit in town to drive them… and anyone under 16 needs a helmet.”  He added, “It sounds like permit purchases have been up, so it sounds like it’s starting to work.”

John Dols voiced a reminder to all citizens that when mowing, grass clippings are not to be blown onto city streets.  The next regular meeting of the council will be Monday, July 13, at the community center.  The public is welcome.