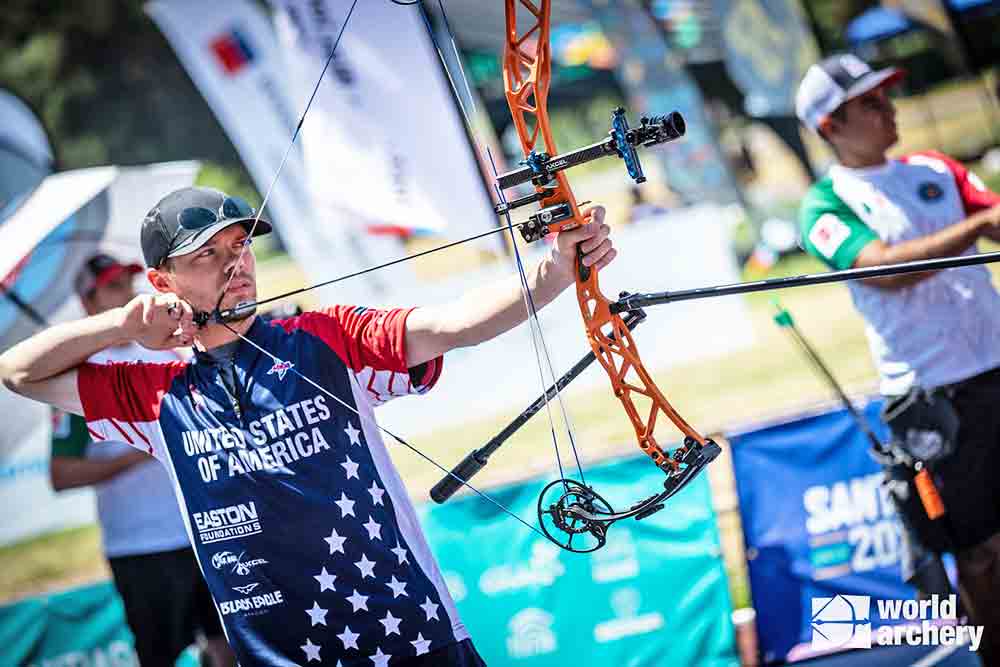 Nick Kappers started archery under the humblest of circumstances. In November of this year, he won two gold medals while representing his country – one for individual and another for the men’s compound team at the Pan American Championship Games in Chile.

Kappers explained there are three categories that a person can medal in at a world tournament, but many different classes in which a team can compete. Each country has a team of four top archers from that country who goes to the event. Kappers was part of the men’s compound division, which included himself, fellow Minnesotan Sawyer Sullivan, Jimmy Lutz of Wisconsin, and Tate Morgan of Montana. Together, in the team gold medal match they won with a 234 to 233 out of a possible 240 against Colombia. In the individual gold medal match against Miguel Becerra of Mexico, Kappers won with a 149 to 148 out of a possible 150.

The team Kappers was part of is selected by a combined national point system shot at five different qualification events throughout the country. They take the top four ranked shooters to form the United States World Team. “Each of us that are on the team have known each other long before making the team as we all mostly shoot the same tournaments together through different organizations such as National Field Archery Association (NFAA), Archery Shooters Association (ASA) etc. so building friendships had happened long before we were on the U.S. Team together.”

For Kappers, a 2011 graduate of Kingsland High School, it all started as a hobby nurtured at home and in the local 4-H program. “I got into it (archery) through 4-H shooting sports. What actually got a bow in my hands was through the family. My dad hunted and bow hunted. That got me into the outdoors and I started shooting a bow when I was little. But the 4-H is what got me into the competition side of things.”

An avid outdoorsman, Kappers reminisced about his early days in Fillmore County 4-H which built him into the professional archer that he is today.

“Archery was my main interest and my main focus. You do the state level and then the the nationals. I did that in 2008 and went to the 4-H nationals in 2009. I went to Grand Island, Nebr., and ended up winning that one. In 2018 and 2019 I got back into competition shooting. This year has really started kick-started my career in archery.”

Kappers has been focusing full-time on archery for the past three years while living at his home outside of Spring Valley. “After my indoor season last year where I took first place at Lancaster Classic in Pennsylvania, then 2nd place in the largest shoot in the world in Las Vegas, and now with my first world gold medal… it is something I’m able to do full-time now.”

The Pan Am games were Kappers’ first international shoot, but he hopes that it will not be the last. “It is something I am going to continue to do (shoot the World Cup events) so long as I make Team USA. ”

Kappers said the feeling of winning his gold medals in Chile was a surreal moment. “The feeling of earning that… you can’t really put it into words. We put a lot of time and effort into making it to that point, and being able to make the team and go to world events is a big deal. Being able to medal in that is something beyond words.”

Most of Kappers’ training takes place at his home, either at his outdoor range or his range in the house. Otherwise, he trains at Coyote Creek Gun and Archery Rochester. The amount of time he spends training will depend on the time of year and the tournament he is preparing for.

“Indoors I usually have more time to shoot, as I can shoot at all times of the day, and it is not dependant on weather or daylight, and usually shoot around 90-150 arrows daily. For outdoor training, it all depends on the weather, but I still try to shoot the same amount every day,” Kappers explained.  “During the fall, tournament season slows down a little bit and I try to focus more on hunting and shooting my hunting bow more than I do my target bow.”

Kappers’ plans for the coming year are to keep improving his skills as an archer and do as much as he can to benefit the archery industry, noting, “I’ve always done what I can to help build or promote the sport with things like helping out local clubs or shops. I recently got in touch with a Minnesota State Archery Organization (MSAA), as I liked what they were doing to grow the sport. They just started a scholastic 3D archery program (S3DA) to help build the interest in the next generation of archers.”

Kappers wants to offer his experiences and knowledge of the sport through different organizations, to hopefully improve upon or start different shoots across the state, to give local shooters the chance to experience different levels of competition without having to travel across the country to do so.

Kappers thanks his parents Dan and Jill Kappers for always believing in him, his girlfriend Shauna Mayer for her support while he is on the road and away from home, and also his sponsors. “I wouldn’t have been able to do it without my dad, and him believing in me. It really pushed me to get to this point. Both my mom and my dad… And, none of this would be possible for me to do without my sponsors. Elite Archery of New York is my main sponsor. I have been shooting their bows now going on two years and have found great success since I started shooting with them.”