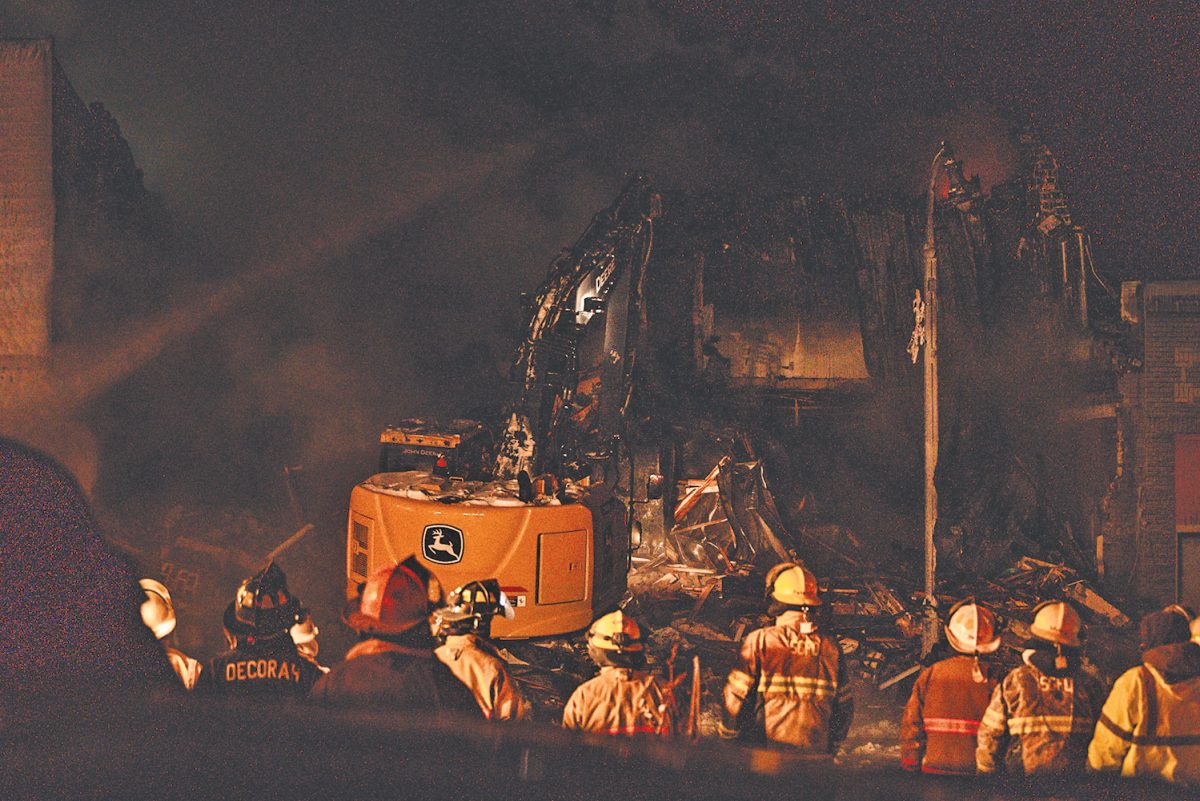 The Spring Grove fire on December 22, 2022, is about stories with exclamation marks.

The fire began in the apartments above the Mulqueen’s True Value store in downtown Spring Grove Thursday afternoon around 2:45 p.m. The hardware store consisted of two buildings connected by a door built after a fire ravaged the former hardware store in 1926 that occupied the same footprint. The building was brought down Thursday in order to control the fire.

According to City Clerk Jana Elton, there were six apartments plus two efficiencies that were affected by the fire. Six families comprised of 11 individuals, including three young children and one teenager, were displaced, but no lives were lost. One family cat was lost, and two firefighters sustained minimal injuries.

Firefighters from Brownsville, Caledonia, Decorah, Eitzen, Mabel, and Houston supported the efforts of the Spring Grove Fire Department well into the early morning hours, around 1 a.m.

Electricity was shut off in the city’s southern area, causing frozen and broken pipes over the weekend. Minnesota Highway 44, the town’s main street, was closed, and traffic was detoured through town.

As firefighters from multiple agencies worked together to battle the blaze in below zero weather, Chief Turner reflected, “It is not only me making decisions. I rely on other chiefs. I’m not afraid to ask questions. We make a great team.”

As with any harrowing event, there are heroes. Other stories of heroes will surface as the days go by, but here are a few stories of community heroes who all went above and beyond the call of duty.

Spring Grove Ambulance Director Angie Halverson shared on Facebook, “I was truly humbled by the turnout of help that showed up when called upon.” She mentioned Caledonia Haulers, who sent trucks with water when the town’s tower started running out of water; Kraus Oil, who was on the scene refueling fire trucks, and ICON Construction, who brought in an excavator to pull walls down to control the fire.

Spring Grove Communications building was open for firefighters to go in and warm up, and there was plenty of donated food to eat.

Mabel’s Village Farm and Home sent over a supply of hand and toe warmers.

Lynn Rostad-Anderson, the owner of Turquoise Tomato, located across the street from the True Value store, shared that the store’s manager, Nick Peterson is a hero, “He ran up the steps to the second floor and shut the door to prevent the fire from spreading.” She described the fire as a nightmare.

Lizzie Hershberger proudly shared on Facebook that her employer, Kwik Trip, provided food and handed out hand warmers and gloves. In addition, her fellow employees gave money, Kwik Trip uniforms, a TV, PlayStation, and other items to their coworker, who lost everything.

The town’s Fest Building and the school were open for warming stations.

An anonymous donor left a generous donation at The Wired Rooster in Caledonia, for all area firefighters and first responders who assisted Spring Grove to stop for some food and a hot drink.

City Clerk/Administrator Jana Elton shared that one of the residents left their glasses in their apartment in their haste to get out and Red Cross stepped in to assist them in getting a new pair of glasses.

City leaders and employees were in the background helping check on residents to ensure they were safe. In addition, family members of volunteers fighting the fire assisted residents and ensured their families were warm.

The Spring Grove Area Chamber of Commerce noted that all emergency needs, including temporary housing, were taken care of by Saturday. Affected families received tubs of food, hygiene items, blankets, toys for kids, cash, and gift cards. Thanks to the generous donations, including a decorated Christmas tree illustrating the true meaning of Christmas, Christmas was not canceled. The Chamber is not accepting clothing or household items at this time.

The Chamber has set up a GoFundMe account has been set up for former residents of Spring Grove and others wishing to help; $12,655 has been raised of the $25,000 goal. The link to donate is https://gofund.me/452c385f.

Cash, checks, and gift cards can be dropped off at any of the  Merchants Bank locations during regular hours or at Trinity Lutheran Church on weekdays. Please note “Good Samaritan Fund/Fire” on checks.

An exhibit at the Giants of the Earth Heritage Center will open on January 20, 2023, featuring pictures of Spring Grove’s Main Street over the decades.

Chief Turner confirmed that volunteers have already stepped up to join the town’s fire department.

Spring Grove Area Chamber of Commerce Secretary Jessi Strinmoen summarized her town, “This is what Spring Grove does!”