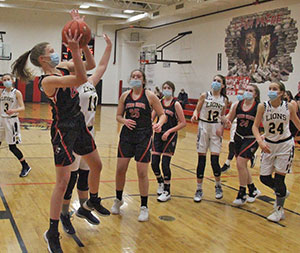 The Spring Grove girls’ eight turnovers were their fewest in eight years and a major reason the girls were finally able to overcome frigid 21% shooting in a 41-37 home victory that completed an SEC sweep over Schaeffer Academy. Due to COVID concerns and quarantines, there were two postponements for Spring Grove during the 11 days between this February 2 rematch and the teams’ first meeting at Rochester. While the quarantined local Lions had not played or practiced during the week preceding this Monday home game, the Schaeffer Lions had dropped decisions to Randolph and Mabel-Canton. Spring Grove improved to 2-3 (2-2 SEC) with both wins over winless Schaeffer (0-6, 0-6 SEC).

“It was clear that we hadn’t been in the gym for over a week during the majority of the game,” said coach Kody Moore. “We missed a lot of open opportunities that we would normally put in the hoop. Although we struggled with finishing around the rim, I was very proud of the way the girls continued to battle and gutted out a come-from-behind win.”

The cold shooting? – It wasn’t that they were taking quick shots or too many long shots. They missed 34 shots in the lane, 11 being blocked. There was no relief from 3-point land with woeful 1-for-15 (7%) futility, but there was relief from a strong 67% from the free throw line (10 of 15). The defense delivered, allowing Schaeffer only two free throws (1 for 2). From the charity line, Spring Grove outscored the visitors by 14 points in a four-point win.

The outcome was in doubt until the final 15 seconds when an Emerson Ingvalson free throw made it a two-possession, four-point margin. Spring Grove won by four points after scoring the final five points. It was a role reversal from the end of the first half when Schaeffer scored the final six points to take a three-point lead into halftime (18-15).

It became a 12-to-1 Schaeffer run after Spring Grove went without a basket for the first six minutes of the second half. Trailing at that point by eight points (24-16), Moore went to a full-court defense that forced three turnovers in six Schaeffer possessions.

Offensive rebounds helped Grove score on five of six possessions to take a 30-29 lead after steals by Lydia Solum and Emerson Ingvalson led to fast-break lay-ups. Friese answered quickly with her only 3-pointer, and it would be back and forth until the final three minutes.

“I felt that the pressure we put on midway through the second half swung the momentum in our favor,” said Moore. “Our energy level rose, we played at a faster pace, and were able to get some easy buckets.”

After missing a flood of shots beneath the basket, Spring Grove took the lead for keeps with two of the toughest attempts of the night. Freshman Katelyn Kraus hit a shot over a defender from the mid-post to break a tie score with 3:50 to play. After a Friese 3-ball put Schaeffer back in front (37-36), Ingvalson, an eighth grader, executed an eye-popping reverse lay-up. SG led 38-37 with three minutes remaining, and Schaffer would not score again. Grove went into a deliberate offense and cashed in 3 of 6 free throws to close the scoring.

Twelve fewer turnovers and 13 more offensive rebounds allowed Spring Grove to attempt 22 more shots from the field (75 to 53). With SG shooting 21% and Schaeffer 31%, there were plenty of rebounds to harvest. Spring Grove won that battle, 38 to 34. Besides McHugh’s dozen boards there were 7 rebounds by Kraus and 6 apiece from Leahy and Solum as well as 4 caroms collected by McKenzie Fisch.

“Jordian Leahy had a big night scoring by attacking the rim and getting to the foul line (8 for 11),” added the coach. “Addyson McHugh had a big night on the glass for us, pulling down 12 rebounds. Overall, it was a very good team win.”

The finish was similar to the teams’ first meeting at Rochester when Spring Grove trailed by one point until scoring the final nine points of the game. There had been 11 lead changes in that earlier contest and seven in this rematch. With these two late-game escapes, Spring Grove has now won 21 of the 22 games against the other Lions in the league.

Schaeffer does not have a B-team or an eighth grade team. The Schaeffer seventh graders earned a season split with a 22-16 win.