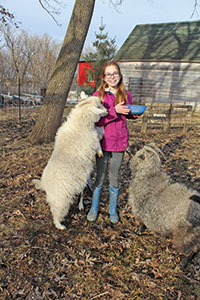 In the heart of Harmony, there’s a little shop on Main Street called Homespun Harmony.  Once inside the eye is immediately drawn to the walls of yarn that are as varied and colorful as a handheld kaleidoscope. One special display showcases the local talents of Audra Otto, a 13-year-old who hand spins yarn from the fleece of her own herd of Pygora goats. Pygora goats are a cross between Pygmy goats and Angora goats. One of the special properties of Pygora fleece is that it stays soft even as the goat ages, unlike Angora goats whose fleece change and becomes coarser the older they get. After a friend and mentor introduced Audra to the breed, she invested in a female Pygora goat that was expecting. The doe had babies the following year, and it inspired Audra to grow her herd and begin breeding.

Audra was first introduced to raising goats when she turned nine years old. Her family started out with Nigerian Dwarf goats, and Audra enjoys making soap from their milk, which has a high butter-fat content. Currently Audra has a herd of three Pygora goats, and their fluffy coats are the most noticeable feature when one sees them. Pygora goats come in a large variety of colors, including white, gray, caramel, brown and tan. Interestingly, sire and dam colors give no indication to what color the kids will be. “You never know what color they will be, they can be completely different from their parents,” Audra explained. In her herd there is Poppy, a white-haired doeling born a year ago that loves to jump and is attached to her mother. Then there is Poppy’s mother Dreamer, a white-haired doe who is expecting kids in just a little over two weeks. Finally there is Finleigh, a grey-haired doe who ignores the barks of the Otto family’s dogs and who is expecting kids herself in May.

Although all Pygora goats have soft fleece, the fleece itself is classified into three types known as Type A, Type B and Type C. Audra has more than one type: “I have one Type A and two Type B goats, and I really like both kinds.” Type A is the most similar to Angora goat hair and is known for long, shiny locks. Type B is very soft and the guard hair is really distinct, which makes it easier to de-hair when getting fleece ready to spin. Type C is similar to cashmere and can be plucked off the goat because it is so fine. Pygora goats are shorn twice a year, usually in the spring and in the fall. Once Audra collects the raw hair she can begin the process of getting the hair ready to spin.

The raw hair is washed and then combs are used to get the guard hair out. The leftover soft pile of fiber is called a “cloud.” A cloud of fibers is put through a tool called a carder that aligns the direction of the fibers and helps straighten it out. Audra takes the straightened fibers to her spinning wheel and begins plying the yarn. Plying is twisting two or more strands of fiber together, and as she spins her wheel it collects on a wooden bobbin. The art of hand spinning has been around for thousands of years, and when the twisted fibers form yarn, that can be used to create clothing and other items. Audra says, “It’s really relaxing to spin once you get the hang of it.”

When asked what she liked most about having goats, Audra said, “ I like how versatile goats are. They can be pets, breeding animals, I can use their fiber, they’re great weed eaters…and they have great personalities.” Speaking of personalities, the registry of her animals is named Blackberry Blossom Farm, which was inspired by the antics of her goats. “We had a wire fence, then we needed cattle panels because Dreamer and Poppy decided they liked the blackberries on the other side of the fence so much they would throw themselves over the gate and escape.” Pygora goats have opened many doors for Audra Otto, and here’s hoping people come and see her handspun yarn at Homespun Harmony on Main Street.