Memorial Day, the day on which those who died in active military service are remembered, was not forgotten.

Out of 22 veterans organizations in Fillmore, Houston and Mower Counties, including American Legions, VFWs, and the Minnesota State Veterans Cemetery in Preston, the majority of organizations canceled their programs amid concerns relating to the coronavirus and social distancing guidelines administered by Minnesota Governor Walz. 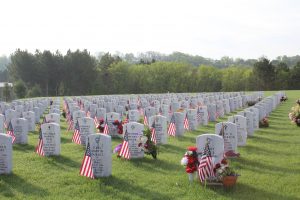 On Monday, May 25, 2020, for the first time since opening, the Minnesota State Veterans Cemetery in Preston, Minn., was open to the public but there was no Memorial Day ceremony.  The graves of veterans were decorated with flags and flowers, and the grounds were groomed as perfectly as a golf course — which is always the case.  Instead, there was a virtual program broadcast on Twin Cities-PBS-TPT at 7:30 p.m. that evening.

Four veterans organizations proceeded with ceremonies as usual, but with one caveat — social distancing was strongly encouraged. 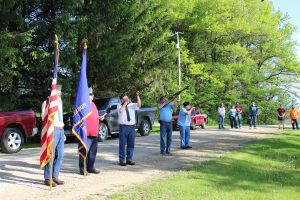 Members of the Fountain American Legion, led by Adjutant Nevin Vrieze, met at the Fountain Community Center at 7:30 a.m.  Their first ceremony was slated for 8:15 a.m., at the Winslow Cemetery, just west of Fountain.  With a small crowd present, including many from the Winslow family, the Fountain American Legion performed the 21 gun salute followed by “Taps.”  They had five more locations in which they performed the same ceremony: Fountain Lutheran Cemetery, Fountain Catholic Cemetery, Root Prairie Cemetery, Wykoff Veteran’s Memorial, and Watson Creek Cemetery. 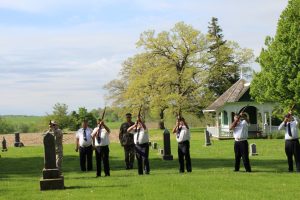 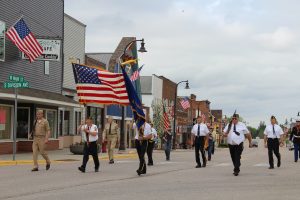 In Spring Grove, Minn., roughly 70 people gathered at the city park to honor their men and women of the military.  With a Spring Grove firetruck blocking one end of Main Street, a black police SUV led a formation of military service men and women along with boy scouts down the main drag.  Led by American Legion Commander Gary Buxengard, with flags held high, they marched to Spring Grove’s city park, the perfectly positioned nucleus of the community.

While the skies were dumping swells of rain to the north, the weather stayed calm and comfortable for the crowd.  Following the reading of the Honor Roll, there was a short program with patriotic music, decoration of crosses and laying of wreaths. 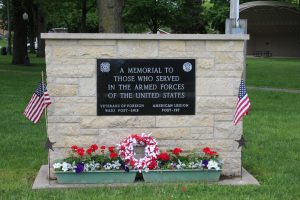 In Chatfield, TV stations swarmed to capture the moment and interviews with veterans.  While their regular program was canceled, the Honor Guard, led by American Legion Commander Dale Rodgers, performed their ceremony at the Chatfield City Park at 11 a.m.

In Rushford, American Legion Commander Scuffy Paulson and VFW. Commander Maynard LaFleur coordinated a ceremony at the Veterans Memorial Park at noon to honor those who had died.  After performing a 21 gun salute, then “Taps”, they placed a Navy wreath in the river.

Just like those who died for their country, this Memorial Day will not be forgotten.