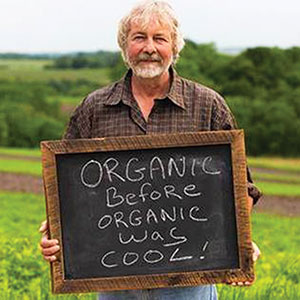 Fourth generation owner, Pete Gengler has been saying this now familiar motto for over 15 years about his family’s organic business, Sno Pac, located in Caledonia, Minn. Believing that organic farming with no pesticides or chemical fertilizers was better for the health of the consumers and was better stewardship of the land, Pete’s great-grandfather, J.P. (John Peter) Gengler started the business on the farm originally owned by his father Michael.

J.P. owned a lumber company that employed a crew of 25 men. He also built a spring-fed man-made ice pond; with the diking system, he was able to regulate the water and cut ice blocks from the pond. In the winter, he had his crew cut and store the blocks of ice in an ice house in Caledonia. The men would bring the ice to town and layer it in sawdust from his lumber company. They then delivered the ice all summer to customers in Caledonia. J.P. also had a rail spur built to the ice pond, enabling him to ship ice to area towns such as Spring Grove, Mabel and to southern locations.

In the 1930s J.P. built a locker plant with an ammonia refrigeration system. He slaughtered his own animals from the farms as well as the cattle of neighboring farmers.

At that time, J.P. was raising vegetables for Onalaska Canning & Pickling. He began to experiment with freezing vegetables and fruits (strawberries and gooseberries) at his own locker plant.

During World War II, J.P., along with the rest of the country, tried to ramp up food production. German prisoners of war were brought in to help with harvesting. At that time, J.P. was slaughtering turkeys and chickens a lot and shipping many of them to Fort McCoy. He packed them in shaved ice. Since the shaved ice looked like snow, the company was named Sno Pac, a name it retains to this day.

Sno Pac used to grow most of its produce on the farm, but with the company’s growth, they have found it necessary to purchase some produce from other sources. Peas, green beans and edamame (edible soybeans in the pod) are grown on the farm while corn, carrots, beets, potatoes, and squash are sourced locally in Minnesota and Wisconsin.

Pete Gengler noted that they don’t have the manpower to grow cauliflower and broccoli; those vegetables are purchased frozen from South America.

There is no irrigation of the fields except the processing plant irrigates nearby fields with its wastewater. The water, because of the nutrient strength and sheer volume of the water (80,000 to 100,000 gallons a day) is not run through the city sewer system. Due to water conservation, the plant was able to reduce waster usage by 20,000 to 30,000 gallons per day. Water from cooling processed vegetables is now used to wash raw products as they arrive from the fields.

Sno Pac ships frozen fruits and vegetables all over the U.S. Sales used to be strongest on the coasts; now sales are strongest in the Midwest. Wholesale distribution goes directly to many local stores and buying clubs. Two local businesses, Grandpa Don’s Market, Rushford, and Buffalo Gal, Money Creek, sell Sno Pac products online and have done quite well during COVID with that. Some customers still stop at Sno Pac in person to purchase as well.

Sno Pac also exports to Canada, Japan, Qatar, and Saudi Arabia. Canada and Japan use the frozen vegetables as ingredients in soups, frozen entrees, etc. Sno Pac formerly had a Canadian label, but the label changes and keeping up with Canadian regulations proved too time consuming.

Currently Sno Pac has around 50 employees with 40 working in processing and 10 farming. COVID limited production; however, Pete noted they had only had two positive cases and a number of quarantined workers. He shared that he has paid people to stay at home when they were sick so they wouldn’t come to work and expose others.

The greatest challenges to the company are finding new people to work on the farm and dealing with weeds. Young people are not as willing these days to work on a farm. When the recent COVID relief payments were $600/week in addition to regular unemployment benefits, some employees were asking to be laid off so they could receive that instead. Weeds are a frustration for all farmers, and even more so for organic farmers which is why organic foods are typically more expensive. Pete declared he’s never going to give it up, however. Organic farming has always been what Sno Pac is all about.

Pete never stops looking at future expansion of Sno Pac. With the current interest in purchasing organic food across all demographics, Pete says organic is here to stay. In 2014, Amy’s Kitchen, a big supporter of Farm Aid, had interviewed suppliers around the country. Each producer was given a chalkboard to write a message and hold up for the Farm Aid viewers to see. At that time, Pete wrote what he has said for over 15 years, “Organic before organic was cool.” Sno Pac will continue as an organic food source for years to come.