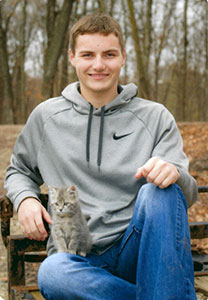 A funeral service will be held at Lime Springs Mennonite Church, Lime Springs, Iowa, on Saturday, January 9, 2021, at 10 a.m., with Pastor Gordon Holdeman officiating.  Burial will be in Chester Hill Cemetery rural Chester, Iowa.  Visitation will be held on Friday, January 8, from 4-7 p.m. at Hindt-Hudek Funeral Home Cresco.  Masks are required and social distancing will be practiced.

Simon E. Swartzentruber was born October 1, 2000, in La Crosse, Wis., son of Eli and Rebecca (Hershberger) Swartzentruber.  He enlisted in the United States Army and began basic training on July 22, 2019.  Simon graduated at the top of his class for marksmanship from basic training. Simon liked to lift weights, practice shooting with airsoft guns, and other firearms.  He was an outgoing and dependable person who shared his strength and humbleness with family and friends.  If Simon set his mind to a task, he was going to complete it.  He took great pride in all his accomplishments.  In May 2019, Simon graduated from Chatfield High School, where he played football.  Simon enjoyed watching whatever football game was being played, and had a love/hate relationship towards the Minnesota Vikings.  He was a Star Wars fan, enjoyed putting together Legos, and loved his cars.

He was preceded in death by his maternal grandfather Enos Hershberger and maternal uncle Eric Leis.