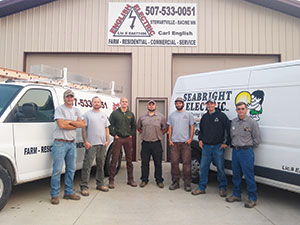 With a sale that was final September 30, 2020, Seabright Electric of Spring Valley officially became part of English Electric of Racine. Carl English, the owner of both companies intends to keep both locations open, possibly building a new shop in the spring near the current location in Spring Valley. All employees will continue working in the same town as they have been. The phone number for Seabright Electric will remain the same – (507) 951-2563; Craig Seabright, who has signed a two-year contract to stay on, will still answer that phone.

Seabright noted, “I have a lot of work going right now; our intention is to gradually merge together. This makes it easier for both Carl and the customers.

Desiring to be his own boss, Seabright first opened his business in 1987. He had previously worked for McConnell Electric in Spring Valley as well as in Rochester as an electrician at Seneca Foods. Sometimes he missed out on family gatherings when he had emergencies, but he had freedom as well. He has built up a “nice customer base with a lot of repeat customers.”

Seabright has found his work enjoyable over the years. “It’s wonderful working in these small towns,” he enthused. He likes to interact with people and enjoys the challenges when different problems arise. His job has never been boring; it’s different every day. He stated, “I enjoy maintenance – you never know what the problems are.”

Most of his new work is “design and build,” where he is responsible for drawing up the plans and building the electric service which he also enjoys.

The electrical business has seen many changes over the years. Seabright explained, “Lighting has changed so much! Now we are using LED lights with much lower wattage.” The longevity of LED lights is much better as well.

Computers have changed customers’ needs. When Seabright first began his company, there were no computers; with the arrival of computers, there was a need for more electrical work in businesses and homes. He still hard wires some computers with CAT5 or CAT6 cables run for customers who want to ensure connectivity, but now more and more are moving to wireless networks.

Seabright began considering a gradual retirement from the business a while back. When a mutual acquaintance introduced Seabright and English, Seabright felt very comfortable with the merger. “Carl is very customer-oriented; he is a lot like me.” For now Seabright is planning on working 30 hours a week or so. As work slows down over winter, he will gradually ease into a semi-retirement. With his wife still working, Seabright doesn’t anticipate any lengthy trips, but may take off a few weeks.

Carl English, the new owner, said both companies advertise residential, commercial, farm, and service; they do the same type of work. English has been in business for 10 or 11 years; previously working for another electrician for 10 years before that. He had originally gone to school to be a game warden; he likes being outside and enjoys doing both the line work to homes as well as inside the homes.

Both Seabright and English empathized that their goal is to have the merger be gradual and smooth. Customers can expect the same service and quality as they have had in the past.