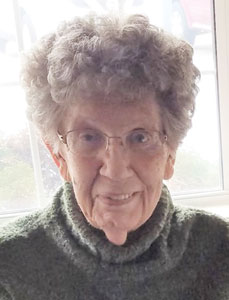 Ruth was born on January 19, 1928, to Hellick and Ronnaug (Sather) Johnson. After leaving home, she married Rudolph “Rudy” Veglahn and they settled down on the family farm. Throughout the years they farmed, raised beef cattle, hogs, and chickens. She assisted with the day to day chores on the farm and had a great love for all animals.

Ruth had a green thumb and was always working in her gardens. She grew her own strawberries, raspberries, grapes, and had several gardens for produce and vegetables along with many beautiful flowers. When her husband’s health deteriorated and he had to go into the nursing home, she was at his side every day, sometimes twice a day, for eight years.

Ruth had several hobbies that included oil painting, drawing, reupholstering furniture, landscaping, wood carving, arts and crafts, gardening, canning, making her own wine, cooking, and baking. Out of all her hobbies, she especially loved to oil paint on canvas and later painted on saw blades. She became a well-known artist in the area. In her later years, she refused to sit still and started to do other crafts such as wood burning and painting on leaves and feathers. She loved to do painting and crafts with her grandchildren. Ruth also enjoyed a good glass of wine and playing cards with friends.

She was preceded in death by her parents, her husband Rudolph Veglahn, brother Norval Johnson, sisters Bea Rott, Gladys Porawski, and Margaret Johnson.

In lieu of flowers, memorials are preferred to the Alzheimer’s Foundation of America.

Online condolences may be left at www.Hindthudekfuneralhomes.com.