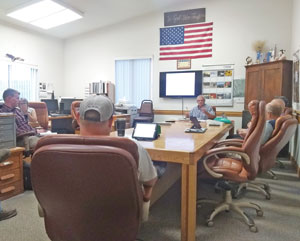 By now, it’s no secret that Rushford Village is looking at making some serious changes to South Rushford to mitigate water problems that have plagued the area this year. The council has been discussing the issues and possible solutions since 2016. The area is considered rural street type, without gutters and storm drains, and has a system of culverts and ditches in place to move water. However, excessive and increasing rainwater runoff has built up behind culverts and ditches, leading to overtopping of roads and lingering swampy spots. One instance this spring saw emergency efforts by the city and volunteers pumping water from the area.

Engineer Derek Olinger, of Bolton & Menk, has indicated a main source of the troubles to be undersized and ill-positioned culverts, in addition to ditches that are too shallow to hold and move the water. Speaking to the council at the Tuesday, August 6 meeting, Olinger brought forth a drainage analysis and suggested improvements that could address the bulk of the issues.

On Sherwood Street, Onlinger noted the primary concern is the lack of positive drainage through ditches on the west side of the street. He suggested work begin on the north side of Highway 43 with the highway crossing. According to the analysis, “The proposed culvert and surrounding ditches need to be lowered by approximately two to two-and-a-half feet. This grading will require extensive grading to the north and into the adjacent agricultural field and residential property.”

Bolton & Menk is coordinating with the state on this portion of the project. MnDOT is anticipating doing work on Highway 43 in 2023 and were already planning culvert improvement. They were notified about the study and can utilize Bolton & Menk data and incorporate it into plans. There’s been no official determination from the state yet. Work to the north and south of the highway is the responsibility of the city.

South of the highway, recommendations include deepening the ditch on the west side of Sherwood Street, upsizing driveway culverts, and lowering culverts to meet the new ditch grades. If driveway culverts are replaced, it will require replacement of road surface over driveway aprons. “Ditch grading along Sherwood Street will require extensive grading into the front lawns of properties along the west side of the road,” continued the analysis.

Olinger noted the deepening and widening of these ditches went beyond the currently held right-of-way easement and the city would need to communicate the issues with property owners, seeking approval or temporary additional easements for the work. “We’re into people’s yards,” cautioned Olinger. “It’s just ditch grading and widening so we’ve got more depth. We’re trying to maintain 4:1 slopes, but it might be 20-feet into their property.” This grading would extend from Highway 43 to approximately 400 feet past the Sherwood and Goodrich Street intersection.

Beyond this, two swales would be constructed to move runoff from the area. An agricultural field west of Sherwood Street appears to drain through a residential property and the swales would intercept runoff, sending it to the new ditches.

Flooding in the area between Sherwood and Whitmore Streets, in the block immediately to the north of Prospect Street, is an ongoing problem as the area has no outlet and drains through ground infiltration only. Olinger recommended a new culvert crossing and shallow swale. The total estimated cost for all of the Sherwood related improvements is $353,000.

On Goodrich Street, Olinger advised the city not to grade ditches deeper and wider, as modeling indicates the amount required wasn’t feasible. Instead, he suggested the city fill a portion of the south side ditches and install storm sewer through this area with concrete curb, gutter, and at least one catch basin.

Near the intersection of Goodrich and Whitmore Streets, it was suggested the city lower the existing ditches and culverts to restore positive drainage to the new storm sewer. Curb and gutter had been considered, but modeling indicated far less improvement than anticipated. This is expected to be $125,000 of the total project cost mentioned previously. “We’re fighting grade here. It’s basically flat,” said Olinger.

In the area of Meadow Avenue and Highway 16, existing culverts and grading make it difficult for water to drain. Olinger suggested a new culvert under the highway by way of jacking and augering so as not to disrupt the roadway. The culvert needs to be lowered over a foot in order for water to drain well. As previously discussed, a check valve could be inserted into the culvert to prevent water from river flooding to backflow through the culvert into the area.

In the northwest section of Meadow Avenue and Goodrich Street, installation of curb and gutter can aid in reducing the frequency of flooding and sediment washing onto properties. Meadow Avenue projects are estimated to cost $170,000.

In the analysis, other options were also discussed. It was noted that the most effective method to address water issues is the construction of urban section roads with a traditional storm system throughout the South Rushford area. This has been largely avoided due to associated costs.

Mayor Gordon Johnson questioned whether or not there was any advantage for the city to own a high capacity pump. Olinger indicated he could run further modeling scenarios with a six-inch portable pump, but cautioned that during significant rain events, it still may not be able to keep up with the inflow of water, even pumping 10,000 gallons per minute.

In a related topic, the city is considering 170 feet of curb to redirect water at the intersection of Goodrich Street and Meadow Avenue. This would be broken out separately from the rest of the projects. The estimated cost is $16,000.

Rain continues to hamper other areas of the city as well, with gravel roads taking a big hit recently. State assistance may be available, but a declaration needs to be made by the state prior to any funding reimbursement. Photos and documentation of the areas were detailed and submitted to Fillmore County and will be forwarded to the state.

In cleanup efforts, Arendahl Township has offered assistance to the Village in a job sharing exchange. While the council spoke favorably about opportunities working with the township, it was suggested that mutual aid agreements were put in place and that all hours and equipment logs were noted for work done cooperatively.

The resignation of former Councilor Rich Smith was formally approved by the council. Smith resigned due to moving out of the Village. Individuals interested in filling the remainder of Smith’s term should contact the city directly. From there, the council will make a determination and appoint a new councilor.

The next regularly scheduled council meeting is Tuesday, August 20, at 7 p.m., at the Village Hall. The public is encouraged to attend.