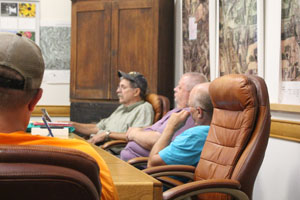 With the onslaught of heavy rains this spring and summer, the City of Rushford Village found a need for outside help. Emergency situations, such as pumping stormwater, cleanup efforts, and road washouts, while managed well by public works, suggested a need for mutual aid between the city and willing townships and municipalities.

At the August 6 meeting, Mayor Gordon Johnson indicated Arendahl Township had offered assistance to the Village in a job sharing exchange. At the time, the council spoke favorably about opportunities working with the township. City Attorney Tom Manion was asked to look into a formal agreement that the Village could use with various townships or the City of Rushford. At the August 20 meeting, a draft of the agreement was presented for review.

“It’s got a lot of items on it,” noted Johnson.

“This is the type of thing we’re used to seeing for emergency services,” added Manion. “There’s a menu of items that could be shared and it’s a good thing to think about.” The League of Minnesota Cities draft allows for multiple agencies or townships to work in partnership.

Johnson further noted the most frequent options the Village runs into are for public works, including equipment and personnel. While the pay rates of each may be different, Manion suggested the rates could be negotiated with each agreement and the amount split to a median amount if needed.

Councilor Mike Ebner suggested the Village hold a meeting with neighboring townships and the City of Rushford to see who wants to join in on an agreement. City Clerk Mary Miner will establish a listing of possible partnerships and work to arrange the meeting. The council approved moving forward immediately with an agreement with Arendahl Township since the Village and township are already working on several projects together.

Public Works Supervisor Travis Scheck noted work on County Line Road is wrapped up and the next phase is repairs to Ridgeview Road next. “We’re going to keep plugging away,” he added. Mutual Aid from Arendahl Township was given to haul debris and it’s likely they will be asked again for work on Ridgeview Road.

In other news, the council discussed potential plans for the construction of a one megawatt solar array for MiEnergy. The company had earlier plans for the project, near its existing array and headquarters, but it was determined the array would run into the floodplain on the south end.

In conversation only, Mayor Johnson discussed the option to lease three acres of Village property to MiEnergy for the array. Preliminary drawings show the area would avoid the floodplain, but formal plans and permitting would need to be done and brought before Planning and Zoning. The project would require a 25-year commitment for a land lease, which would be paid annually to the city. Currently, Featherstone Farms leases the city acreage on an annual basis.

Planning and Zoning opinion was “generally favorable,” according to Zoning Administrator Jon Pettit. The most notable concern was the 25-year commitment. The previous permitting acquired by MiEnergy has expired and both new permitting and a public hearing would also be required. In addition, the Village would need to notify Featherstone, per contract, 30 days prior to September 15, to avoid an automatic renewal of the current land lease. There was some discussion regarding the shifting of land areas so both parties could be happy, but the possibility of that is unclear without a formal plan from MiEnergy.

“The format is certainly editable,” noted Johnson. “This is just laying it out. It most certainly is a model at this point. Green is the way to go, they say. We would have liked to see a solar array ourselves, but I don’t know if we could afford the investment.”

Johnson also noted he’d recuse himself if and when and if a decision is made on a plan, as he is employed by MiEnergy.

“Lets see a formal application first,” responded Councilor Mike Ebner, who also suggested the Village communicate with the current tenant. “We need to be up front.”

Representatives from the Village will be at the County Commission meeting Tuesday in hopes a declaration will be approved regarding storms July 18-19, which led to significant flooding issues. The declaration has to be approved prior to any state funding being awarded to the Village.

There is no decision yet on the council seat left vacant by the resignation of Councilor Rich Smith, who moved out of the Village. Individuals interested in filling the remainder of Smith’s term were asked to contact the city directly. From there, the council will make a determination and appoint a new councilor. To date, several inquiries have been made and Clerk Miner suggested the Village may want to address how to proceed. It is likely the topic will be discussed at the September meeting.

The next regularly scheduled council meeting is Tuesday, September 17, at 7 p.m., at the Village Hall. The public is encouraged to attend.