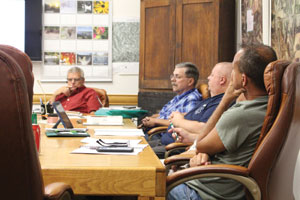 Preliminary planning for work in south Rushford continues. Engineers are recommending the city replace/reposition a number of culverts and do significant grading north of the Highway 43/Sherwood Street, at the Highway 16/Meadow Lane crossing, and in several ditches within the south Rushford area. Culvert work on Highway 43 would likely be included in upcoming MnDOT projects, while Highway 16 would not.

“I think just by doing the grading on the north side, we’d find benefit,” said Councilor Mike Ebner.

“You may want to see the level of satisfaction on grading take it a step further,” said OIinger “It’s affecting everything upstream of it.” The two property owners in the area were made aware of the recommendation and were willing to work with the city, according to Olinger.

One potential project issue may be proximity to floodplain. Wetlands delineation may be needed and will be reviewed. If classified wetlands are determined, and permitting is needed, the grading timeline may extend six months. Current plans are to be spring 2020 and beyond. “Some preliminary planning can be done with a rough estimate for engineering in the plan,” added Olinger.

“We should move forward with engineering, so when time comes to bid, we’re ready to go at a minimum,” said Mayor Gordon Johnson. “We owe that to the citizens of south Rushford. At least we’re moving forward. We’ve made an attempt we’re starting someplace.” The council voted unanimously to get the project ready for bidding.

Repair quotes on Benson Lane were provided to the city by Generation X Construction and it’s just shy of $25,000. The recently renovated area saw significant erosion issues following heavy rains in July and August. Work on the excavated areas began last week, including repairs to wing walls and the driving surface. The ends of the culverts will be extended out from the crossing, compacted, and topped with rip rap.

Structural engineers from Bolton & Menk continue to review county bridge inspection reports, particularly for the bridge on Aspen Lane. “I would be shocked if the recommendation isn’t that they have to be replaced with box culverts,” noted Olinger. “There is life left in it yet, but it’s towards the direction of replacement.” The area would likely need Department of Natural Resources permitting, having substantially more water flow than other recent project areas.

The road surface for Aspen Road/Village Drive is also a candidate for work. Olinger recommended mill and overlay of the surface. No determination has been made by the council.

Highway 30 work through the west side of the Village is scheduled to begin this month. Olinger clarified that work is overlay only, with minimal surface patching.

In other news, Planning and Zoning Administrator Jon Pettie provided details on two recent solar permitting applications. An application from One Energy Development, out of Madison, Wis., was received for a large MiEnergy solar array, with land leased from the Village, was received. The ground-mounted, 1.25 megawatt system is expected to cost $1.6 million. The Planning and Zoning Board discussed the quote at length, but determined there wasn’t enough information to provide a recommendation to the council, according to Pettit. Consideration of ramifications to the industrial area and site plan are to be discussed with the company representative on October 14. “We just wanted to go a little deeper and were unclear of the arrangement. There are a lot of questions that should be answered,” he added. The preliminary site plan includes tracker units. MiEnergy cannot utilize land it already owns, due to floodplain. It was noted that stormwater management solutions would need to be included in the plan.

A second application for solar array was received from David and Leanne Kasper’s rural property. They intend to install a roof-mount system under the 7.5 output maximum detailed in the Village ordinances on private solar arrays. A public hearing will be held prior to the council approving the application.

The city received a complaint regarding the semi parked in the lot at South Rushford Park. The semi is operated by Jonas Sublett, who approached the council in July seeking approval to park the semi in the lot overnight. The complaint is one of several that the village has. “Certain ones don’t like to have in south Rushford. Some thought a good idea, some didn’t,” said Johnson. “He has been good with communicatng with us, but it isn’t appreciated by everybody. They thought it should be parked in his own driveway or where others park their trucks in town. I assured them I would bring up in coversation again.”

There is no current parking restriction in the park and Sublett has met the criteria set by the council, including not running the truck and keeping wheels chalked when not in operation. No further action was taken on the issue.

The next regularly scheduled meeting is Tuesday, September , at 7 p.m., at the Village Hall. The public is encoureaged to attend.