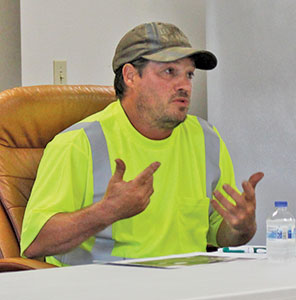 The October 6 Rushford Council meeting was led by Councilor Mike Ebner, serving as acting mayor in the absence of Mayor Dennis Overland. In attendance was City Engineer Derek Olinger, of Bolton & Menk, to discuss the final details of the first phase of the South Rushford Drainage Project.

While work can technically begin as soon as easements are in place, Olinger indicated work will commence in the spring, as utility coordination needs to occur. He previously suggested leaving the construction timeline open to any time during the 2021 construction season to provide greater contractor flexibility, to result in better pricing. The work was estimated at $57,035, but Olinger hoped it would come in lower. The council awarded the project to Griffin Construction. Their bid, for $40,511, was one of three received.

Public Works Supervisor Kyle Chiglo expressed lingering concern with the project, specifically water from the Root River flowing back through the area near Meadow Lane creating potential interior flooding. “It’s a pretty valid concern with as high as I’ve seen it several times,” said Chiglo. “I’m worried it would have an adverse effect on properties.”

The idea of a flow gate within the culvert, to prevent backflow, was discussed early on in the project. However, Olinger indicated that the Minnesota Department of Transportation (MnDOT) would have to sign off on it and that it’s not likely to get approval. “Realistically, water gets into town if it crosses over culverts. At the rate the water is getting through there, it’s not going to make a difference,” responded Olinger. Culverts will be lowered eventually, but that will not be affected by the grading being done in this phase. “I’m not concerned by it.”

Work is also continuing on the city’s many miles of gravel roads. While calls have been coming in regarding grading needs due to dry conditions, the number of major projects needing to be done is keeping Public Works busy. “These other major projects need to be addressed first,” said Chiglo.

A cattle crossing repair in Ridgeview Road has been delayed due to lack of product, but should get completed soon. The council approved funding the supplies, a cost of $500. Ditch work on Airport Road has also been a priority. It was suggested the department utilize a mutual aid agreement with Arendahl Township to speed up the process. Washing at the ends of a driveway on Main Street was also discussed and will be monitored until next spring.

Hearing nothing else on the agenda related to Public Works, Chiglo spoke up regarding what he called, “a bombshell,” officially tendering his resignation as Public Works Supervisor, effective November 21. According to Chiglo, he’d spoken to Mayor Dennis Overland regarding an opportunity and position with Fillmore County that would provide benefits he was not currently offered in his position with the Village. Apparently, Chiglo had been hoping discussion of benefits would be on the agenda.

“I have to at this time then offer my resignation. I’m more than willing to stay and help as much as I can. I appreciate the opportunity the Village has given me. It has a special place in my heart,” stated Chiglo.  “I’ve been offered a position. It’s got quite a few benefits that are pretty appealing. I talked over with the mayor and he was going to look into it. I have to make the decision tonight and was hoping to have some sort of resolve with that.”

City Treasurer Judy Graham questioned if anyone else knew about the request and it appeared it was new information to everyone. “It was pretty short notice, but good notice. If there’s some insurance available, I’d love to talk about it. The opportunity to get my family some healthcare is pretty huge right now.”

Chiglo has been in the position with the Village since June 16. He was the only applicant at the time. “It’s the first I’ve heard about it,” said Councilor Bob Hart. “What’s it going to take to keep you here?”

The council opted to table the resignation until the Personnel Committee, comprised of Hart and Councilor Rick Ruberg, can discuss the option of providing healthcare and retirement benefits. It was noted the benefits have not currently been budgeted for.

A summary of an ongoing zoning issue with the property at 29705 State Highway 43 was also discussed by the council. Councilors Hart and Ruberg met with property owner Dave Lind regarding the issue, a building erected with no permit and not complaint with Fillmore County and Village setback ordinances. Lind was notified of both and served a fine for no permit. Last month, he provided a letter to all members of the council and city staff regarding the issues.

According to Hart and Ruberg, Lind reiterated concerns from the letter, encouraged all members of the council and Planning and Zoning Committee to visit the site, and sought clarification on why the structure was fined even though it is a temporary structure. Hart indicated Lind was encouraged to come to a meeting, but that Lind was uncomfortable to talk about it in public. “He has a lot of investment in his current spot and it would create a hardship if he were to move it,” said Hart.

“One thing is, brought up several times, is that there was already a setback and it’s adding a setback to it,” added Ruberg. “One big concern is that other buildings in the area are not in compliance either.”

Ebner noted he was unaware of what setbacks were during the time those other buildings were constructed. “We’re going by the county’s guidelines on setbacks. The county set that, not Rushford Village.”

“We have to be at least as restrictive as the county. In this instance, it’s the same as the county. I think the county would laugh if we asked them to take it back. We have a set of ordinances – rules. We have to decide to follow them or throw out the whole ball of wax. You can’t do whatever you want and then threaten or complain and nothing happens. There’s certainly no reason to have zoning if everything is negotiable,” added Zoning Administrator Jon Pettit. “I’m at a loss to understand why this is such a cloudy situation to enforce. It’s the council’s duty to enforce.”

Ebner further indicated after discussions that there is a process which needs to happen. “Number one, he needs to go right back to the beginning. He didn’t get permit and was fined. He needs to pay the fine and then reapply for a permit. Then, all the questions he has can be brought back to Planning & Zoning. All of these questions could be answered,” he said. “That’s how this works. We don’t go to them, he has to come and apply for it. There are other options for him if he reapplies.”

“We have spent a whole lot of dollars and time and lawyer’s fees and it’s like he’s snubbing us,” noted Graham. “If we continue this, you’ve got to think about this: the money that’s been spent; every man, woman, and child in the Village is paying for this. It’s been coming up for months. We need to finish it.”

City Attorney Joe O’Koren will draft a letter to Lind indicating the process moving forward. The letter will be up for approval at the next council meeting.

The next regularly scheduled council meeting is Tuesday, October 20, at 7 p.m., at the Village Hall. There will be no Planning and Zoning meeting that evening.