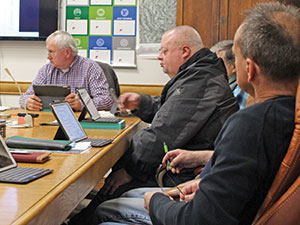 In January, Rushford Village received a report following the League of Minnesota Cities’ appraisal of all city property. Upon review, there were wide discrepancies in valuations between the league’s and the city’s estimations. The city’s insurance agent, Butch Johnson Insurance, began checking into whether or not errors were made on the figures.

At the March council meeting, Johnson indicated to the council that the league was intending to appraise every city and township it insures in the state within a seven-year period. He also noted that insurance premium increases would be capped at 30% and that ironically, items of city property which included engineering design didn’t go up and in some instances went down in value.

The council continued to push the league for justifications of the new valuations, but it appears that garnered little traction. “They’re not going to budge on anything,” stated Johnson at the April 5 council meeting. “They had answers to all the questions we had.” Johnson presented several options to the city, which ultimately decided to follow his recommendation for Option 1, utilizing the league values and rate increases capped at 30%. In some good fortune, the city’s premium will actually be lower for this term.

When asked how the city’s premium compares to that of other municipalities, Mayor Dennis Overland noted it’s not comparable mainly because of the way the league does things. For instance, the league pays out a dividend to its members at the end of each year, based on claims and other guidelines. This amount can vary widely, decreasing the actual amount paid in each year.

Overland was questioned again on whether or not the city could seek other insurance options. “There’s not much out there for cities. I don’t think you’d do better on the open market,” he noted.

“I don’t want to burn bridges, but I don’t accept their appraisals,” countered Councilor Bob Hart.

“They’re good to work with. They really are,” echoed City Clerk Mary Miner.

The city also debated another long-running issue: the hiring of a part-time or seasonal Public Works employee to help keep up with demanding projects. Right now, the city employs one full-time department employee, Public Works Supervisor Trenten Chiglo. Discussion included workloads of both fair weather seasons and winter, the time of year to hire additional help, and whether that person should be full-time, part-time, or seasonal.

“There are other things out there that Trenten should have help with. There are things he shouldn’t be doing alone… help lifting or a road guard when he’s working on roads,” cautioned Councilor Mike Ebner. “Besides, if he’s gone, it’s nice to train someone in for the process of being here on a weekend. Until we try it we don’t know.”

“I don’t think we should wait. It’ll take some time to find someone,” added Councilor Roger Knutson.

The Village will place an advertisement for the part-time position, which will require sewer and water certification and commercial driver’s licensing (CDL) or the ability and willingness to attain them. “That’s going to weed them out,” added Ebner. The council will reevaluate in the coming months once applications are in.

Chilgo recently acquired his Water Class D certification and the council considered whether or not to increase his pay grade. As noted by Miner, in the past, every time an employee passed testing, they received an increase in pay. As Chiglo is expected to test for sewer certification and CDL this fall, the council opted to wait on a raise, preferring to step him up in pay grades once rather than multiple times.

“It’s a good incentive,” noted Knutson. “Then we could look at a couple steps, not just one.”

“I think he needs to be told that, too,” added Ebner. “There will be some compensation when he gets it done, but we need to let him know up front.” The council will reconsider a pay increase this fall.

The city currently keeps former Public Works Supervisor Travis Scheck on retainer for sewer and water reporting. Miner questioned whether or not the city should continue this arrangement and it was determined that they should, at least until Chiglo has the required certifications.

In other employee news, Councilors Knutson and Rick Ruberg are currently working on revising an employee reference manual. “There’s a lot there, obviously. I wonder if we should have tackled it into smaller portions,” said Knutson.

The city recently hired human resources consultant Paul Ness to review the manual and assist with completing steps for A Workplace Accident and Injury Reduction (AWAIR) Program, a part of Minnesota Occupational Safety and Health Administration (MNOSHA) compliance. When Knutson and Ruberg are done reviewing and making suggestions for the manual, Ness will review and make any further recommendations before the council approves it. The whole process will take some time.

“We’re still farther ahead than we’ve ever done,” noted Overland.

In other news, the council discussed the upcoming spring cleanup, which led to discussion of potentially extending the current garbage contract rather than rebidding for a new contract. The contract ends in February 2023. More information will be sought from the current provider, Harter’s Quick Clean Up Service.

The new city truck is expected to arrive at the end of April. A final inspection will be done in the coming weeks. Its arrival does point to a need that’s been discussed for some time: the addition to or construction of a building that includes both water and heat for a wash bay.

“We need to take a serious look at what we’re going to do with the building. Before you know it winter is going to be back here,” cautioned Knutson. “We need to discuss the bigger picture.”

“The 450 is already rusting. Things aren’t washed and there’s salt all over,” echoed Ebner. “I’ve talked to Derek Olinger [city engineer, with Bolton & Menk] a bit. They would help us with water/sewer design on what we can/can’t do. Where we go with the building is up in the air, but we can’t piecemeal it.” Discussion on the issue will continue in the coming months.

The next regularly scheduled council meeting is April 19, at 7 p.m., at the Village Hall. The public is encouraged to attend.