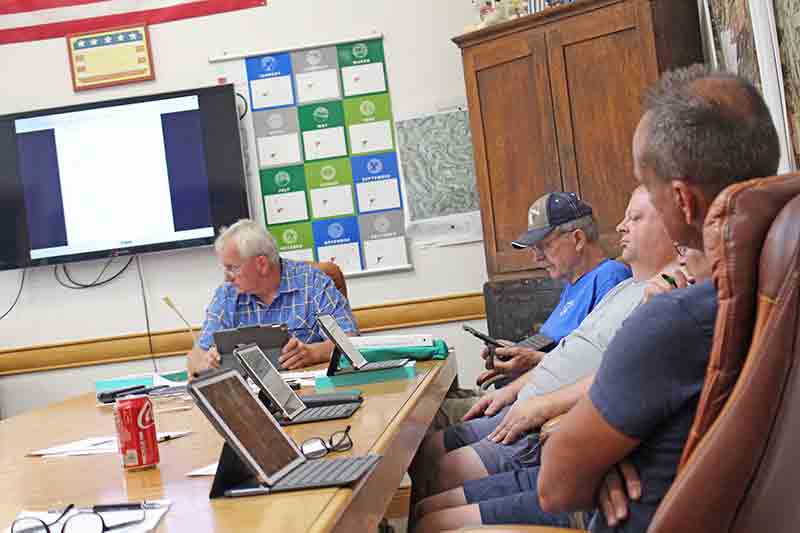 At the July 19 meeting, the Rushford Village Council heard a proposal from City Engineer Derek Olinger, of Bolton & Menk, for addressing road deterioration on County Line Road. Like many rural roadways, it’s gravel, winding, steep in sections, and prone to the bombarding erosion of watersheds. Traveling east on the road, erosion has dug into 50-60 feet of the north side of the road edge, leaving a 10-foot drop to a channel bottom. The city has been aware of issues at the site for some time, attempting to mitigate the problem, but finding no success.

In June, Olinger suggested the city look into more permanent options, including a gabion or soldier pile wall as most cost effective. The proposal includes geotech soil borings, a topographic survey, and a hydraulic specialist to determine the best course forward. The cost of the proposal is $25,000.

“We need to get someone out there to determine the strength of the rock underneath to begin designing,” said Olinger. “Once the survey is done, we can do the basic design information, and once the concept is together, we would get a more detailed cost estimate.”

Olinger was questioned on whether or not there was any plan to move the road further into the hillside to recover additional space in the tight section. “If there’s any room we’ll look at it. It’ll be interesting to see what the geotech shows. I’m guessing not much because it’s so steep. It gets out of hand pretty quickly,” he responded. “We need enough space so the roadway space is being preserved including five or six feet for the traffic barrier. We’ll be using up just about all the space we have in there.”

“My issue is obviously we have so much of this and it could happen in so many places. Are there other problem areas?” asked Councilor Roger Knutson.

“This has always been the worst,” added Mayor Dennis Overland. “We don’t really have much choice.”

“Someone could very easily hit that washout and go down in there,” cautioned Councilor Mike Ebner.

“There are some things you can do that are less costly, but ultimately you’ll end up in the same boat,” noted Olinger.

At this time, the city would need to issue a bond to cover the cost of the project, but there may be some grant assistance available. Community Economic Development Associates representative Rebecca Charles, who was also in attendance, noted that she is already looking at a Community Facilities Grant for the city. Depending on the project’s qualifications, it could fund up to 60 percent of the cost, but it’s not guaranteed.

“How do we pay for it? Are we capable of making that payment?” asked Knutson. The city currently has two bonds. Cooperative Way payments end in 2024 and a recently refinanced $808,000 bond ends in 2032.

“We might have to put some of those other big projects off,” acknowledged Overland. “Until we know exactly what this is going to be.”

Olinger did point out that of all the cities he works with, recent projects in Rushford Village have ended up less than estimated due to local contractors doing the work. However, he did note the severity of the County Line Road issue and the need to address it as soon as possible. “If something comes up and that $250,000 is off, that doesn’t make the problem go away. You just have to figure out the funding in a different way.”

Olinger is working with Public Works Supervisor Trenten Chiglo to make temporary amends to the area using riprap to hold the embankment, as well as signage and cones to alert drivers. Construction on the road mitigation would likely take place next spring.

The council also discussed the need to determine a plan for Village Road. The road currently has a bridge, noted from the county in a past report as deficient, but to address the problems could be more than it’s worth. Estimates to replace the bridge or replace it with box culverts would easily ring in at more than $100,000 or more likely two to three times that, according to Olinger. Luckily, the properties the bridge serves can be accessed by another road less than a mile to the east.

“Nothing says the city needs to provide that for the future. We need to look at the cost associated in relation to the number of homes they’re serving,” said Overland.

“It’s in the best interest of the Village to eliminate unnecessary crossings. There’s nothing wrong with having a crossing there, there’s just costs associated,” added Olinger.

Should the city decide to abandon and remove the bridge, the estimated cost is $83,000. The city would need Department of Natural Resources approval for any removal or repairs to the area. The area also meets with Yucatan Township and the council pointed out the need to have the township made aware of the issues.

“To me it seems pretty obvious that we’d remove it, but I don’t live there,” noted Knutson. “Maybe there is a legitimate reason to leave it.”

Olinger issued caution at ideas of keeping the bridge, but not using it. “In cities where structures remain, at some point, they’re going to be a major issue. If you’re not using it, get rid of it,” he said.

The property owners in the area and Yucatan Township representatives will be invited to the August 16 meeting to discuss the bridge and options.

The next regularly scheduled meeting is Tuesday, August 2, at 7 p.m., at the Village Hall. The public is encouraged to attend.