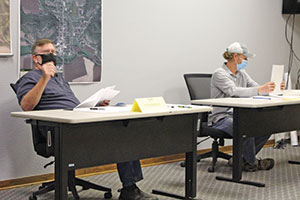 While all area municipalities received Coronavirus Aid, Relief, and Economic Safety Grant recipients, some struggled early on how to utilize the full funds, anticipating having to send unused funds to Fillmore County November 15. For the City of Rushford, who received $133,352, the funds were put to good use helping purchase supplies, fund hazard pay and benefits, administrative costs, and a grant relief program for city businesses and nonprofits. Fund discussion was continued at the November 9 meeting of the Rushford City Council.

Funds totaling $99,163 were distributed to 21 businesses and one non-profit, following an application process developed by city staff and reviewed by a council subcommittee of Councilors Sally Ryman and Leigh Volkman, along with City Clerk Kathy Zacher and City Administrator Tony Chladek. All, except Rushford Peterson Valley Chamber of Commerce and Sterling Drug were awarded $4,900 through two different approvals. The other two submitted applications requesting far less than that; $480 and $680 respectively. Most requests ranged between $7,200 and $11,550, but five others ranged from $20,000 to a whopping $145,500, as businesses did their best to push on despite the pandemic.

Total CARES Act funds spent for part of August and September was $57,163 for grants and $1,667.99 in supplies for Public Works (PWD), Rushford Police Department, Rushford Ambulance Service, and Rushford Fire Department. October’s total was $42,280, with all except $280 going to grants. Thus far, November has seen costs of $31,139 including administrative costs, miscellaneous bills, hazard pay and benefits for or PWD, police, ambulance, and fire department. The total hazard pay and benefits was estimated last month, but was noted as $28,679 now that actual hours are known.

According to Zacher, $2,433 remains from the CARES Act disbursement, which will be kept in the general fund for expenses through November 15.

The council also reviewed a Minnesota Department of Health summary of on-site analysis of its water system. Inspection of the city’s three wells and wastewater treatment plant revealed only two minor deficiencies. Several recommendations were included, as well as a listing of known requirements. Zacher noted little surprise, as the Public Works Department stays on top of such items well.

City Engineer Bolton & Menk, Inc. requested and was granted approval of Work Order #3, related to planned Highway 30 improvements. This order was initially held back from other approvals granted last month in order to allow engineers to work with Minnesota Department of Transportation (MnDOT) on an amendment in the agreement between the department and the city. The work order authorizes the Final Design Phase and covers the remainder of engineering services to deliver final plans to MnDOT for bidding next year.

Another work order, from engineer Matt Wagner, of Mead & Hunt, was also approved for the Rushford Municipal Airport Electrical Vault Replacement Project. As noted by Zacher, the current electrical service was installed in a temporary building after the hangar fire last October. New, permanent service is required by the Federal Aviation Administration. At this time, the city is unsure what methods will be used for paying for the improvements, however, the costs will be reimbursed. “Even if we pay a little, we come out ahead,” said Zacher. The cost of the project has been revised to $211,399.

Economic Development Authority (EDA) has recommended approval of four Residential Rehabilitation Revolving Loans, which were in turn approved unanimously by the council. These deferred loans are available to homeowners within the city who meet income guidelines for general repairs. Per the agreement, no payments are due until the home is sold or is no longer the borrower’s main place of residence. The city has been contracted with Semcac to review applications and provide oversight of the projects. The four loans total $56,033, with the smallest being just $3,221 and the highest $22,965. The costs will be paid out of EDA funds and recouped later.

A review of the city’s draft Parking Regulation Ordinance was also on the council agenda. However, there was no action at this time. Public Works and the Rushford Police Department will provide further input to the city on proposed language for a final ordinance.

Lastly, Mayor Terri Benson expressed thanks to election officials and volunteers for their work during the November 3 general election. All voting went smoothly at Rushford’s City Hall.

The next regularly scheduled council meeting is Monday, November 23, at 6:30 p.m., at City Hall. It is open to the public.