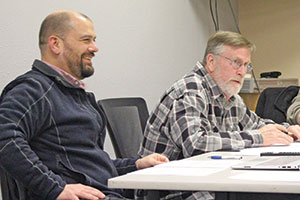 A lengthy Rushford Council meeting February 10 gave the council much to think about. First up was an informational discussion with City Attorney Mike Flaherty regarding conditional use permitting, specifically the procedure by which they’re granted and the legal standards applicable to them.

Flaherty is working with the city to review the city’s code as it relates to conditional use permits (CUP) and the process that should be used. “It’s kind of a dense topic, where there’s a lot to say,” he noted. It was explained that while the bulk of the council’s work is legislative, they do act in what he dubbed a “quasi judicial role,” applying facts in CUPs and variance permitting to existing city code. He further noted that once standards are set and adopted, the city must follow those standards with factual findings.

Once a permit application is received, the 60-day rule is in effect and a decision to approve or deny it must come within that time. Flaherty noted Minnesota statutes give the city the authority to adopt ordinances regarding general or specific standards to permitting, but once in effect, both the procedure and substance of the request must follow the approved criteria.

“There was some sort of question of process here in Rushford,” he added. The discussion came in light following a request from Well House Ministry, December 9, for a CUP for usage of property which was the former Rushford-Peterson Elementary and High School.

“With the substance of the application, whether to grant or deny, you have to make specific factual findings; facts within the record to support decision. They are case by case specific.” It was also noted that reasonable conditions can be placed on permits that relate to the standards. “That’s the legwork you should do ahead of time. It’s difficult to make on the fly. When you get an application, that’s the time to deny if standards are not met.” Within the first 15 days of application, the applicant can review and resubmit the permit request if incomplete or if errors are found.

Should a CUP be issued, Flaherty stressed that it is forever with that parcel of land, even if it’s sold in the future. “Once it’s granted, it’s granted. With a condition in the permit, then it can be revocable. You have to have criteria; build up the record to create a link of the fact that’s been investigated. Once it’s granted, the court is going to look at what happened before, based on the facts they had at the time.”

While the council is typically the final decision-making entity, after receiving a written recommendation from the Zoning Board, Rushford’s ordinance lists the board as having that role. “That’s not the norm. In most, the council is making the decisions,” noted Flaherty. In a prepared memorandum, Flaherty noted that in doing so, Rushford is not following its ordinance, which gives decision making power directly to the Zoning Board. “They thought they were making a recommendation and you were going to review. Any court reviewing the city’s approval or denial of the CUP will very likely overturn the decision as arbitrary, capricious, and unreasonable, even if the city correctly analyzes the CUP criteria,” read the memorandum.

As noted by Councilor Jim O’Donnell, the five-person board, currently with just four members, is comprised of citizen volunteers. “It’s quite a big responsibility, without any training,” said O’Donnell.

“I agree 200%,” responded Flaherty. The city code can be amended to change the current process and Flaherty will work with both the board and the city on suggested changes.

“The board did follow all the steps, but they shouldn’t have made a recommendation. They should have made a decision,” added City Clerk Kathy Zacher.

“In 2019, the actual amount paid out was for $7,050 using the above formulas. Bi-monthly training meeting are important for EMT/EMR to attend to keep abreast of training, review use of existing and new equipment, review recent runs, review any comments from the medical director, review record keeping process and review needs within the department,” stated Humble in her report.

Lastly, the base rate charged to patients was $525, plus $11.02 per loaded mile. It was recommended and approved to bring that loaded mile rate to $11.54, the maximum allowable paid by Medicare. Humble noted this rate will ensure the best payback. The increase will generate approximately $5,000 per year depending on the number and type of runs. Roughly 65-75% of all patients transported by Rushford Ambulance Service are served by Medicare.

The council also unanimously approved continuing with the downtown flower basket project. One hundred baskets will be purchased for 2020, at a cost of $35 per basket, with an additional four baskets, at no cost, to be provided for use on the Rushford Days float. The Rushford Lions Club will continue to provide watering service for the baskets.

The next regularly scheduled council meeting is Monday, February 24, at 6:30 p.m., at city hall. The public is encouraged to attend.