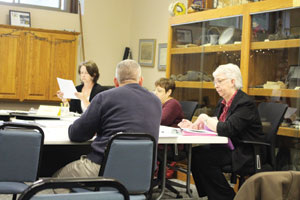 While the agenda for the Tuesday, May 28 Rushford Council meeting was shorter than normal, there was plenty of discussion, particularly of the city’s upcoming street and utility improvement project. The affected areas of the project include East Grove Street, Walnut Street, North Burr Oak, and Lamplighters Lane. Total project cost is $1,754,969. The negotiated sale of the bond is $1.8 million. Financial Consultant Mike Bubany, of David Drown & Associates, was on hand at the meeting to discuss the terms and the proposals for bonds that were received.

The city council has approved the proposal from United Bankers’ Bank at a net rate of 2.2712%  over a 10-year term. The other two proposals came from Robert W. Baird & Co., Inc. and Northland Securities, Inc. “Bidders often couple with other companies behind the scenes. When United Bankers’ Bank called and said they intended to bid separately, I knew that was good news,” noted Bubany.

In preliminary planning for the project, Bubany had estimated a conservative 2.9% interest rate. “I built a little fluff into rate and we did better than the fluff,” he said. “If you look at what happened, the purchaser didn’t take anything and said we’re gonna get paid on the other side. They’re selling principal payments for premium and there are yields you’re going to benefit from.” The average levy amount to cover the bond is $77,000. The city has a self-set debt per capita limit of $6,000 and this new bond keeps total debt under that level.

The city did seek a reevaluation of bond rating through Standard and Poor’s for this bond. While it was hoped the city could regain the A+ rating it once had, due to recent increases in financial reserves, it was reaffirmed at A-stable. “Years ago it was [A+], but the city dwindled cash reserves. Since then, you’ve worked hard to rebuild reserves and stayed budgetary flexibility and management is perfect,” said Bubany.

One of the reasons the city rating remained the same was a noted “weak debt position,” according to Standard & Poor’s. However, Bubany noted other cities with double AA+ status whose debt is also categorized as weak. “They look at debt per capita, debt to reserves, debt to market values… it’s just their term for a specific ratio,” added Bubany.

“The second reason out of your control — local economy,” he continued. “They feel there’s not enough growth potential. If we improve debt position it could have upward push, but we all know you’re staring a number of projects in the face.”

“Financially speaking, it doesn’t make much difference. The point is, financially, had you gotten an A+, you could have patted yourselves on the back, but it wouldn’t have changed much.” He estimated that in 10 basis points, the higher rating might have made a difference of $9,000 difference over the course of a 10-year term.

In other news, the council has approved an update to the floodplain ordinance, following updated Federal Emergency Management Agency and Minnesota Department of Natural Resources mapping. A public hearing will also be held on the ordinance. The new mapping will go into effect August 15.

“There are reasons we’re making these changes,” stated City Clerk/Treasurer Kathy Zacher. “It’s just the ordinance now. Then, we decide how involved we’re going to be in helping people in the affected areas. If we’re proactive and help people address these things right away, some of them might be really simple.”

Zacher indicated that projected mapping might not be accurate to surveyed mapping and that Letters of Map Amendment can be put forth by affected property owners. “If we feel an obligation to help not just with physical, but with paperwork, either way it’s going to help the homeowner if we take the lead. First we need to get the ordinance in place.”

The Airport Commission is seeking proposals for a Fixed Base Operator. Similar to an airport engineer contract, which is federal, the state suggests the city should review potential opportunities for operator contract every 10 years. The position is not paid, but the operator will receive perks negotiated by the Airport Commission, including use of hangar space. Submission deadline for the contract is June 1 through July 31.

During the reports/updates portion of the meeting, Zacher updated the council on the proposed updates to the city’s tobacco ordinance. She stated that Brenda Pohlman, of Fillmore County Public Health, is waiting for the state to come out with its ordinance/policy language before the county determines theirs.

The next regularly scheduled council meeting is Monday, June 10, at 6:30 p.m., at city hall. The public is encouraged to attend.