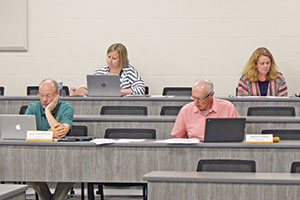 It’s been a rough few months for R-P students and staff, as the school year was modified to crisis distance learning and facilities closed to in-person instruction for the coronavirus pandemic. While district administrator Jon Thompson previously praised the state for giving districts eight days to switch gears, unknowns remain as the district attempts to follow new and changing guidelines. What happens in the 2020-2021 school year is currently under discussion.

The school board unanimously adopted a COVID-19 Preparedness Plan at the June 15 meeting. “Our philosophy this whole time is to follow CDC [Centers for Disease Control] guidance. It’s the most sound advice,” noted Thompson. “How we’re going to handle things is not laid out in the plan. It’s more general. Basically, we’ve taken guidance from state and CDC and attached our name to it.”

During his monthly report, Thompson further stressed that what next year will look like is largely unknown at this point. “The state is saying this week that they’re coming out with guidance on what it might look like,” he added. “As a district we must have three plan options. We’re all rooting for all present.” While completely preliminary and still just discussion points, Thompson indicated what the options could look like.

Option one, having students and staff in full attendance will likely include wellness checks, including possible temperature checks, and social distancing of six feet, but present a huge challenge in execution. How distancing would be conducted in the cafeteria, common spaces, and on playgrounds is unknown.

Option two could be a continuation of distance learning. “It’s really a different world for a junior than a second grader,” noted Thompson. “If we get to a full closure of school, we will have to work on this.”

Option three was described as a hybrid of the other two options. Thompson stated that schools are talking about holding in-person classes every other day, having the days split in half, with morning and afternoon instruction, or having segments of students meet every other week, particularly if there isn’t enough space for social distancing.

“Our current plan is to get guidance and come up with our plan. If people ask, I think a fair answer is we’re not 100% sure yet,” he added. “We may want to start the school year early [July/August] if the state waives the start date limit, but we’re not making decisions until July. We’re just not there yet. But, we know it’s going to be one of those three models. We’ll probably have periods where we have all three. It’s not a great answer, but it’s truly where we are right now.”

How the options might affect district families, now that the majority of the population is back to work, was stressed. “The decision might get taken out of our hands,” he continued. “With every other week, if we had to go one route, that would be my favorite right now rather than every other day. It’s a legitimate concern. Many think it’s a school issue and we’re sensitive to that, but it’s a family issue and it’s tough.”

While the district has opted not to hold summer school, gradual reopening of the building and activities has begun. The district’s fitness center is open, but users have met with district staff one on one and have been required to sign a waiver.  Outdoor activities resumed June 15 with staff taking temperatures and doing wellness checks. “The kids were so good,” said Thompson. “I thought there would be awkwardness, but they handled it with great maturity. The kids had to adjust and so did the leaders.” All activity leaders have submitted preparedness plans to Activities Director John Loney.

The state is supplying refunds for items the district has paid biennially. However, money that comes into the district from fee-based sources, such as milk and snacks, health and fitness, are being carried over to the 2020-2021 school year wherever possible.

In other news, the district has approved a two-year contract with Bernard Bus Service. Two bids, from Bernard and Ready Bus Company were received with Bernard as the low bidder, some $33,000 less. Both bids contained a fuel clause for price adjustment of wholesale gas. “The fuel clause indicates that the district would reimburse the bus company for any fuel purchased in excess of these rates per gallon,” read Thompson’s summary. “Difficult for us to price and therefore difficult to compare. The price of fuel is so important to consider in these proposals.”

With the clause, a savings with a minimum of two snow days, and a offered discount of $6,000 from the original proposal, Ready’s proposal was then lower. However, in calculating a series of fuel differences ranging from 25 cents to $1, it was determined Bernard was the lowest, except in the case of a $1 fuel increase. Both companies have served the district in the past with Berard Bus Service being the current provider.

“It’s not a sealed bid process. We’re less concerned about the deadline than we were the numbers,” stated Chairman John Linder. “The price of fuel is the kicker. That’s the unknown. It’s nice to have it blocked in, at least for the first year.” The board approved the contract 6:1 with Director Val Howe opposed.

Other notable items from the agenda included adoption of the 2019-2020 budget revisions, the 2020-2021 budget, contract for Community Education Director Lisa Lawston, custodial contracts, memberships with the Minnesota School Board Association and Minnesota Rural Education Association, who conducts specialized advocacy for rural districts, and discussion of  interest in a formal, but limited graduation ceremony.

While not on the agenda, before adjournment, Board Director Joyce Iverson sought clarification on the district’s history curriculum. “Does it include criminalization of our black and brown citizens? It seems like every minority, they were wanted when we needed them and when we were done with them, we wanted them to go.”

Thompson stated further review would be done and brought back to the July meeting. “We have a lack of diversity in the community. Any understanding of what it would be like is difficult for us. It’s a good question. It’s an important question. We’ve learned so much in last few weeks because it’s been made available and that’s a positive thing. Why wouldn’t education be our best chance to help our children understand?”

Chairman John Linder also noted that 2020 is an election year and four of the seats, including his own, Chris Grindland, Val Howe, and Bonnie Prinsen’s are up for grabs. Linder noted he will not be seeking reelection and encouraged members of the board and public to file for the positions. “Hopefully there will be some good candidates that come on the ballot.”

The next regularly scheduled board meeting is Monday, July 13, at 5:30 p.m., in the Forum Room. The public is encouraged to attend.