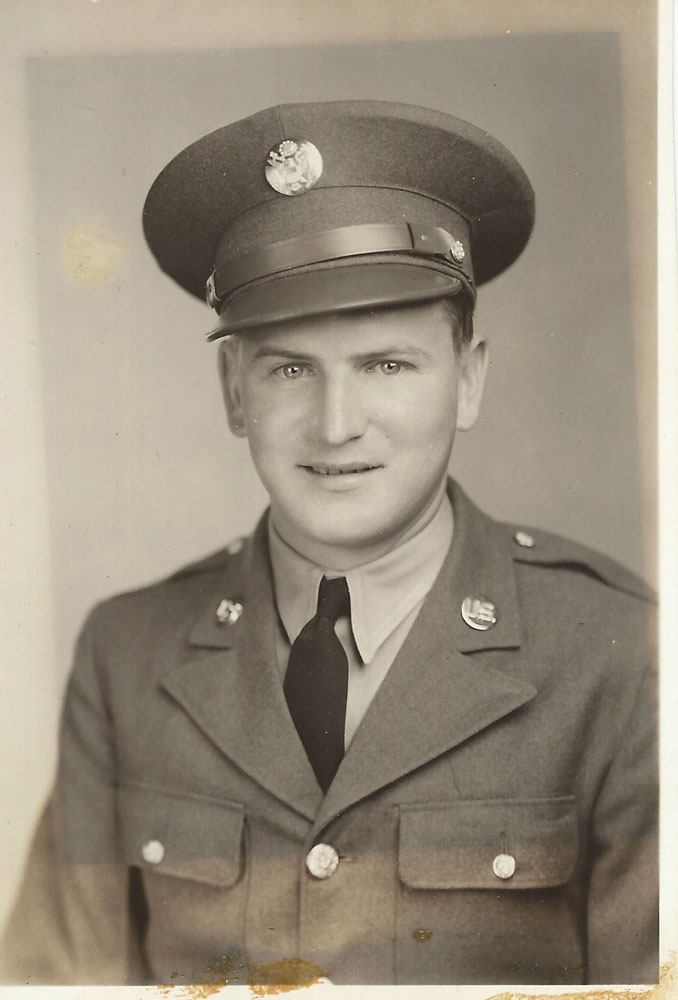 Every Memorial Day, since I can remember, we went to the cemetery and visited my great-uncle’s grave.  It wasn’t until I was older that I realized the significance of this and the importance of not forgetting about those that have served.  I decided to find out whatever I could about him and his service during World War II.  Two of his sisters were still alive and shared what they could.  Artifacts of his started finding their way to me; small items, photos, and letters he had written home, and it was then that I realized how important it was to keep his story and memory alive.

Born April 30, 1918, Herbert Dragvold lived in the Rushford area his whole life with his parents, five sisters and one brother.  He was engaged to a local woman and worked as a farm hand before being drafted into the Army.  His military story started in January 1942 when he was inducted at Fort Snelling, Minn.  He served in the 9th Infantry Division and trained at Camp Walters, Tex., and Ft. Bragg, N.C., before being deployed overseas where his division fought in North Africa, Sicily and Normandy, France.

“We are moving right along.  We are now in Kansas City, too fast to suit me, but it is lots of fun as long as it lasts…”

“This traveling by ship is probably alright if you ride something else than a troop transport.  There were 1800 men aboard and a lot of trucks, jeeps and tanks.  It was so crowded where we slept, you could hardly move. The bunks were four high, there wasn’t enough room (between) me and the bunk above me to turn over while I was in bed… It wasn’t very comfortable but it was something new and something different… I am hoping to be home during thrashing time…”

“I suppose you know I won’t be getting the furlough.  I don’t like it but there is nothing I can do about it.  Now that we are about ready to move out it is too dangerous to take one of your own.”

In the middle of September Herbert did something very out of character.  Desperate to see his family one more time before he was deployed, he went AWOL and came home.  He spent a few precious hours with his family and returned to post. 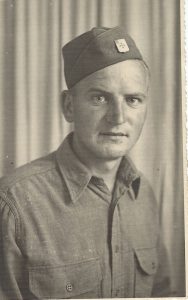 This has been rather a long day as I am not allowed to leave the co. area, although I did get permission to go to church this morning.

I didn’t get back here till about 7:00 Friday morning as I couldn’t get a train out of Washington, I was in Washington at 9:30 a.m. Thursday, so you see I made good time that far.

I don’t know what punishment I will get. I guess they will have a trial of some kind.  I don’t care what they do but I know they can’t take from me those few hours I had at home.

Yesterday they gave out five-day furloughs but I wouldn’t have gotten one of them anyway, as they are given only to the boys who live close by.  I hope you got back alright.  I haven’t anything to write about so good-bye.  Don’t worry about me.  I’ll never be sorry I went home.

Landing in North Africa in November 1942, the 9th Division was involved in heavy fighting in North Africa and Sicily.  March 1943 he participated in the capture of Bizerte in North Africa.  October 17, 1943, he sent a short letter and photo from Sicily to his sister.  He was transferred to England in December 1943, where he took non-commissioned officer classes and trained for the invasion of Normandy.  June 11, 1944, they landed in Normandy, France, five days after D-Day.

“…I was present when Herb was killed.  It was a terrible shock to me when it happened so I know what it must have been to you when you were notified of his death…Herb was killed instantly, he never knew what hit him.  There was no suffering.”  –John Riebiling, 9th Division

“He was well liked by all of us, was easy going, but by no means a push-over.  When he became a non-commissioned officer (first corporal and then sergeant) he did his job well, but did not let his rank change him. Herb was killed by artillery fire.  The army lost a good leader and I lost a good friend.”  –Charles Hughey, 9th Division