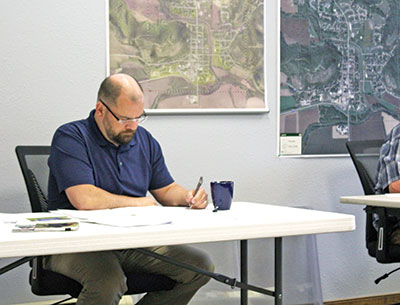 The July 25 Rushford City Council meeting brought a positive outlook on economic development and frustration over an ongoing push for a special legislative session with impacts on small cities.

Programs such as the Prosperity Initiative are also providing financial support to businesses. The initiative aims at inclusive business growth for entrepreneurs, including women, veterans, and persons with disabilities. Likewise, the Rural Entrepreneurial Venture (REV) Program is helping through an intensive three-year commitment by cities looking at economic development within their community.

“It has branched out regionally,” noted Hoiness of the REV program. “We need to consider how our three communities, Rushford, Rushford Village, and Peterson, can find local business leaders and public sector leaders to partner and take a commitment of time to do this program. The conversations are a big part of it.”

“It’s a proven framework,” added Oeltjenbruns. “The program is based on how to make your community and your entrepreneurs succeed.” Kicked off in 2018, both Lanesboro and Spring Grove have gone through the program, among other communities in southern Minnesota.

Turning to child development, Oeltjenbruns indicated a nationwide child care shortage continues. “We have taken active steps to mitigate this,” she added, noting grant funding and training available. While it’s unclear how much this affects the Rushford area, she suggested SMIF consultants talk with the council or community groups. “We’re willing to work with anyone in need of some assistance. It’s all free of charge. We make sure people have what they need.”

While this all provided positive routes forward for the city, Administrator Tony Chladek later expressed his frustration with the most recent legislative session. Noting discussions with other members of the League of Minnesota Cities, he described a lack of progress on things particularly relating to small cities.

“We’re looking to see if there’ll be a push for special legislation. They have unfinished business… things that didn’t get passed in the last legislative session such as dedicated funding for Small Cities Assistance. “The assistance isn’t permanent,” he continued. “Bigger cities get a designated funding source annually. Small cities do not. It’s on the table, but they didn’t come to an agreement.”

“The top half of the list could probably get knocked out. Down the list, there’s some significant disagreement on things,” added Chladek. “With the federal dollars; we’ll lose the opportunity for funds this year. This directly impacts the state bonding amount. They could have leveraged some of the bonding dollars for the federal dollars, but they didn’t do bonding either.”

Chladek insists that Small Cities Assistance should be clear. “In Rushford, your tax dollars are going out, but they’re not coming back,” he stressed. “There are 700+ cities that are not getting assistance, but we’re contributing to it.”

“They’re trying to figure out how to get that done. They’re either going to do this or it’s going to be another year or two down the road. There’s consensus enough; sooner would be better than later,” concluded Chladek. “We’re hoping residents will talk with their legislators. Ours are big dogs in the capital and they sit in the middle of this. If they see the community asking, maybe some things will start to happen.”

The council did approve several agenda items, including acceptance of the second distribution of funds from the $65 billion Coronavirus Local Fiscal Recovery Fund under the American Rescue Plan Act. This funding amounts to $92,616, an increase from the $89,679 distributed in the first distribution.

The council also provided a rebate of liquor license fees to Jim & Debbie Kitchens for license fees paid in 2022, due to the unique timing of the new ownership of Nordic Lanes and The Creamery. The rebate amount is $1,068.

During reports, Chaldek made the council aware that the former Farmers Win Coop property is now back on the market. The council and Economic Development Authority will be meeting in the future to determine how to handle the situation. The property represents a large parcel in the heart of downtown.

The next regularly scheduled meeting is Monday, August 8, at 6:30 p.m., at city hall. The public is encouraged to attend.