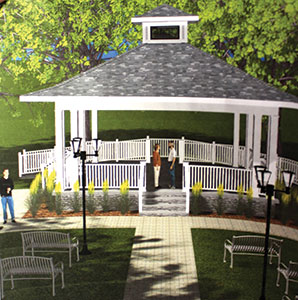 At a swift May 23 meeting, the Rushford Council approved two items of general business and heard about a project put forward by the Library Board.

The capital projects proposal is the construction of a community bandstand just west of the public library on existing green space. The bandstand will honor longtime Rushford librarian Susan Hart, who served in the role for 25 years. Hart sadly passed away earlier this year. Memorial funds have been coming in to honor Hart and the board talked with the Hart family regarding appropriate use of the funds.

The concept drawing was done by Derek Colbenson, a Rushford native and “history buff,” according to City Clerk Kathy Zacher. Colbenson works for Beaver Builders Supply, of Holmen, Wis., and was interested in helping out with the project. He has been working with Councilor Jim O’Donnell who serves as a Library Board liaison for the city.

During general business, the council approved a donation from the Rushford Women’s Club transferring their original 2019 donation of $4,421.18 to the new project. With the donation, O’Donnell informed the council of the beginning plans.

The project will mirror both the original bandstand design and the architecture of the Tew Memorial Library building. The drawing, while completely preliminary, boasts a square-design with white beams and trim, stone foundation, and a cupola atop the roof. The bandstand would not alter the previous park work that’s already been done on the site.

The project is still in the planning stages, determining size, materials, and cost. Project fundraising for the bandstand will commence once the Library Board determines which way to proceed, following the securing of cost estimates.

Zacher noted it is a good way to also emphasize the library’s anniversary in 2023. No council action was needed at this time.

The council did approve an Economic Development Authority micro grant application from Acer Inc, 301 Industrial Drive, for exterior building amenities including a stone panel trash can/cigarette urn. It will be placed near a bench and is intended to encourage the community to help keep the front area of the building clean. The total cost of the work is $493.86 and the grant will cover $246.93.

The next regularly scheduled council meeting is Monday, June 13, at 6:30 p.m., at city hall. The public is encouraged to attend.