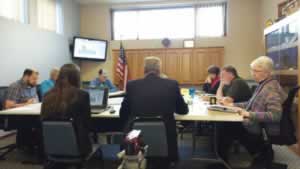 The 2016 audit, by Smith Schafer & Associates, is completed and Rushford has received good news regarding several efforts. General fund reserves, as a percentage of general fund expenditures are now sitting at 67%, a marked improvement since 2011 when the figure had dropped to just 11%. The city had been cautioned previously that reserves had dropped too low and in the five years following, steady improvement has been made.

Total general fund expenditures were again less than budgeted, this year by more than $43,453. This was attributed to reduced costs for professional services, street lights, utility, gas/fuel and repairs and maintenance. Tom Wente, principal for the accounting firm, noted that the city was unique in budgeting for capital improvements, which he said most municipalities don’t. While actual expenses looked to exceed the budgeted amounts on the audit’s bar graph, Mayor Chris Hallum suggested it was not as simple as looking at the graph. City Clerk/Treasurer Kathy Zacher added that no one project was substantially over budget, but that numbers shifted based on where they fell in the year.

Debt service continues to be reduced, despite the number of improvement projects that were on the books. “You paid down quite a bit. Several bonds come off in 2017 and 2018,” added Wente.

Self-supporting funds, such as the Electric Fund and Sewer Fund are looking good at the moment, but Wente suggested the city keep an eye on them. “The trend definitely catches my eye,” he cautioned.

Once again, Wente also noted in his report that the $184,721 owed by the Liquor Fund, which used to operate the municipal liquor store, still needs to be addressed.

“I’ve asked it every year; when are we going to address the Liquor Fund?” asked Councilor Mark Honsey. “How does that affect our General Fund?”

Wente responded that with $721,000 in the fund, writing off the deficit wouldn’t be a major deficit.

Honsey suggested if the building were sold, any profit left after repaying the state could be paid to the general fund.  “We’re paying it out of the General Fund now. It’s a big red line we discuss every year,” he added. “It’s the one blight on every stinking year.”

Clerk Zacher reminded the council they’d made a decision to actively market the facility for sale. “By the end of the year, something will happen.”

City Administrator Tony Chaldek added the dollar amount is something the city would like to utilize as leverage to the staff in effort to reduce any repayment for state-funded improvements at the former municipal liquor store. Zacher added that the city can use the argument that any profited funds from a sale are needed for economic development purposes and that the money should roll back to the city.

“We’re opening every door we can and we’re going to open even more; explore every opportunity. We’re making good strides in that area,” noted Chladek. “We just have to be patient.”

“We’ve had the same audit for seven years,” Honsey countered. “The sore thumb is still sticking out there.”

Should the city decide to absorb the cost of the deficit the building, a financial asset to the city, has to be transferred somewhere else, like the Economic Development Authority. For now, the city will sit on waiting to write the losses off in hopes that the building will sell or some other determination can be made on it. “Just remember this conversation in a year,” cautioned Honsey.

In other news, the city has approved a Rushford Municipal Electric Commission and Star Energy recommended project to award bids for the Feeder #5 project. Feeder #2, which serves all of the “Brooklyn” area of Rushford, is already overloaded and the new school is set to add to the demand when the district takes up occupancy later this summer.

Lastly, good news for community member Rob Bunke and his family; the council has officially approved an Airport Commission recommendation to formally recognize the naming of Robert W. Bunke Field at the airport. A ceremony to mark the occasion will be held during this July’s Rushford Days. A thorough history of the field and Bunke’s contributions was put together and was highly noted by the council. The significant item of the naming is that it will put the official name on all flight maps for pilots to see.

The next regularly scheduled council meeting is Monday, June 12, at 6:30 p.m., at city hall. The public is encouraged to attend.