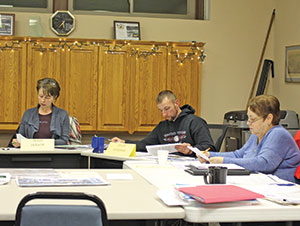 The City of Rushford held a public hearing Monday, January 27, for the purpose of reviewing comments related to proposed changes in the sewer rate. The 2% increase, which equates to just $.94 per month for 2020 and $.96 per month for 2021, was suggested by Financial Planner Mike Bubany, of David Drown Associates, as part of a larger financial review and planning. The increase is earmarked for increased maintenance and operation expenses.

As for the City of Rushford Village, which contracts with the city for services in South Rushford, the rate will also see an increase from the $29.88 per month currently paid per customer. The increase is $.60 a month for 2020 and $.61 a month for 2021.

According to City Clerk Kathy Zacher, homeowners are charged per residential equivalency unit, which is derived by normal gallonage per household and based on living units. Businesses are charged on actual consumption.

A 2010 rate study suggested the city increase rates to maintain ongoing expenses. 2015 was the last time rates were increased. “The fund was not paying for itself. We raised it $5 a month over two years,” noted Zacher. “We need to raise again, but don’t want such a large jump. This is not so tough to handle.” The increase will provide roughly $11,000 a year in added revenue.

“This will help maintain the fund balance and pay for needed upgrades. With the cost of living increases and higher rates in general, they count up over time and the sewer fund has to pay for those increases,” added Zacher. Major upgrades are typically funded via bonds through agencies such as Public Facilities Authority and the planned upgrades for the city are still a ways off. “This way, we’re able to keep up without any major increases.”

In looking at community comparisons, the average is $45.63 and Rushford sits just a titch over at $47.89. In the past, such increases have prompted conscious efforts by the user to consume less water — a good thing. However, that drop in usage does affect total revenue. “As people have gotten more efficient, our costs have gone up though,” noted Councilor Leigh Volkman.

“This will cover maintenance and operation,” said City Administrator Tony Chladek. “We might have to come back in a year or so and take little bites out of it. It’s all part of our capital finance planning, looking out several years.”

“It’s been four years since we raised rates,” added Zacher. “For sure the cost of everything has gone up. We’re paying off debt service before taking on something new. With this, we might be able to take on something without raising rates because we’re taking a proactive approach.”

Approval of the rate change was unanimous.

In other news, the Economic Development Authority (EDA) is recommending the sale of Lot 1, Block 1 to MBC Properties – Rushford Manufacturing. Both the EDA and Planning Commission reviewed the proposal regarding tax revenue, future expansion, comprehensive planning and more. The purchase agreement process is still ongoing, but the council voted to approve moving forward with the sale.

The council also approved a task order with engineering firm Mead & Hunt for work to be done at the municipal airport. Following a fire at the airport this past October, several entities assisted with equipment and funding needs to get the airport back up and running in a short amount of time. Electrical equipment, related to runway lighting and other needs, was damaged in the fire and was temporarily housed in a shed on the property. Now, the city will place the electrical services in a concrete electrical vault, as well as purchase needed equipment that was borrowed.

The project is expected to be $185,000 with it being funded 90% federal, 5% state, and 5% by the city. Insurance settlement from League Of Minnesota Cities Insurance Trust will cover some of the predicted $9,250 city cost. “Whatever insurance doesn’t cover, emergency funding will,” stated Zacher.

As for the hangar that was lost, the Airport Commission is looking at options for a 2021 build. The city is receiving National Plan of Integrated Airport Systems funding for having had 10 planes (or more) housed in rental hangars at the airport. “When you don’t replace hangars, you lose money and the ability to leverage federal funding,” cautioned Chladek. “If under 10, we’d have to go to the feds every time we need to do a project.”

A campaign to secure tenants for the future hangar will begin soon. Mayor Terri Benson questioned whether or not amenities such as sprinkler systems, insulated hangars, or other features could be an attractive draw to future hangar tenants.

Other future plans at the airport include the conversion of the current Jet-A fuel tank to AvGas. Currently, the airport offers both, as a previous hangar tenant utilized the Jet-A fuel. Now, the fuel is not being purchased and must be turned over, with new fuel added, in less than six months to avoid it losing its effectiveness. There are currently 500 gallons of Jet-A in the tank. The plan will be to remove it, clean and convert the tank. The cost is expected to be roughly $1,000.

The council also approved the hiring of Officer Thomas Mensing to the Rushford Police Department in a part-time role. The department currently has three full-time officers and two other part-time officers. Mensing is a 2007 Rushford-Peterson graduate.

The next regularly scheduled council meeting is Monday, February 10, at 6:30 p.m., at city hall. The public is encouraged to attend.