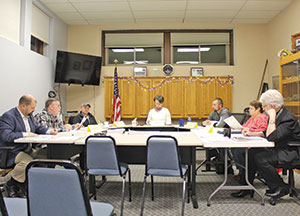 The Economic Development Authority (EDA) recommended the Rushford City Council approve a contract with System for Integrated Growth – Edward Lowe Foundation at the January 13 meeting. The recommendation came following EDA discussion on the matter earlier in the month. The contract will allow the EDA to sponsor businesses to work with the foundation to provide best practices and data to better manage and grow their respective companies, according to city documents.

According to City Administrator Tony Chladek, the foundation was launched in an effort to provide entrepreneurs with structured assistance to improve their businesses. “I have heard a lot of good things about this foundation,” he enthused. Second-tier businesses, those with 10-99 employees, are the desired entity for the foundation. Rushford Manufacturing fits within this target profile. “We would use Rushford Manufacturing as a pilot project. There’s a $15,000 plus value out of these consultants,” added Chladek.

It was proposed the city enter into a limited a $125 per hour, 33-hour contract. If the partnership does not prove beneficial, the city will only be on the hook for the initial registration and consultation, a $150 fee. Should it be a success, a successive round of consultation, at the same rate, but for up to 25 hours, may be approved. “From an economic standpoint, if they create jobs, it’s a drop in the hat,” noted Chladek.

“The cost is an experiment at best,” added Mayor Terri Benson. “The EDA thought it was a worthwhile test experiment.”

“The EDA is always looking for ways to help businesses grow,” stated Councilor Sally Ryman. She further noted that the data that will be provided by the foundation is typically not available to second-tier businesses due to the financial cost of acquiring it. “It might be a jumpstart in those areas. We’ll see if they can grow a little faster than they were planning to. They’re planning for the future already, growing from seven to 22 employees. They have good momentum. For this amount of money, it’s a great pilot program.”

“The businesses in this range are the ones that grow the fastest,” added Chladek. “With a focused effort on this size, we’ll see a greater return.”

In other news, the city heard from Public Works Director Roger Knutson regarding a request for preapproval for replacement of 1996 Ford Tandem truck. The department has long known the truck, purchased following the 2007 flood, would need replacement and staff, particularly maintenance worker Dave Lombard, on their own time has combed through advertisements. When a recent find was located, the department missed out on the purchase, having to wait until the next council meeting to discuss the proposed purchase. In an effort to minimize missing such offers, Knutson sought council opinion on pre-approval of a truck, meeting all criteria, with a not-to-exceed range of $35,000-60,000.

“That was exactly the scenario here,” said Knutson. “We’d been looking for several years and we found this one. We told him we’d need to have it inspected and run it past the council and it sold on us.”

While several on the council noted some agreement with that process, Councilors Jim O’Donnell and Leigh Volkman expressed some concerns. For O’Donnell it was fiscal responsibility of the city in decision making process. “I would feel more comfortable if it was run past us first,” he said. “We’re talking bigger bucks.”

Volkman stated he preferred getting more detailed information on what criteria the department was seeking and that a “builder truck,” one requiring some additional fabrication for the city’s needs, was more of a risk than a truck completely ready to head out on the job.

In the end, the council opted not to give Public Works pre-approval, but encouraged the department to continue looking for a replacement. Chladek suggested the city look at ways to streamline the process to allow Public Works a little flexibility while still retaining council control over the final decision.

“This is to get on track to make sure there’s enough money for when needed improvements come up,” clarified Zacher. The last rate increase was in 2016. Rushford has lower sewer rates than other comparable municipalities according to past financial data.

“A significant piece of the modeling is upcoming capital improvements,” noted Chladek. “This way there are little increases instead of one big adjustment, so there’s no dips.” The increase allows the city to maintain reserves, continue paying off existing debts, and prepare for needed improvements in the coming years.

The 2020 regular meeting schedule will remain the second and fourth Monday of each month, beginning at 6:30 p.m. Two notable exceptions are the second meeting in May, which will be moved to Tuesday, May 26 for Memorial Day holiday observance, and the other meeting in October, which will be moved to Tuesday, October 13, for Columbus Day observance. Mayor Benson asked the board to consider revising the meeting time to 6 p.m., but it was left at the usual time to accommodate conflicts with work for other council members.

The council also reviewed and approved annual appointments to various city boards and commissions. Mayor Terri Benson will take on a hefty lot, serving on Community Education, Economic Development Authority (EDA), Labor/Management, and the Safety Committee. Councilor Andrew Linder will remain with Trees/Trails/Parks, but will add the Airport Commission to his responsibilities. Councilor Jim O’Donnell has been appointed to Labor/Management, Library Board, and Planning Commission. Councilor Sally Ryman will remain on the EDA. New Councilor Leigh Volkman will serve as council representative to the Rushford Municipal Electric Commission.

Volunteer appointments to these boards was also approved for a number of citizens. However, a number of positions remain vacant. These include two seats on the Planning Commission, three on the Airport Commission, two on the EDA, and one on Electric Commission. Benson thanked the volunteers for their efforts and urged others to apply.

The next regularly scheduled council meeting is Monday, January 27, at 6:30 p.m. at City Hall. The public is encouraged to attend.