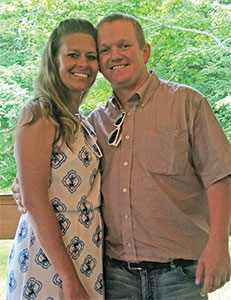 Tara Hershberger always had a feeling that she would get cancer.  Her mother had breast cancer when she was young and survived.  Tara then did the BRCA gene test and did not have the breast cancer gene. She dealt with two episodes of melanoma, once when she was 29 and again when she was 30.  But at the end of February she was diagnosed with stage three lobular carcinoma, the second most diagnosed breast cancer in the United States.

Being diagnosed with breast cancer is daunting enough but having to deal with cancer of any kind during a pandemic is even more harrowing.  After putting off her yearly mammogram for almost four months, she finally went in at the end of February. Mayo Clinic called her back that same afternoon and asked her to come in the next day for more images and then an ultrasound.  Three days later they did a biopsy and it came back as stage one lobular carcinoma.  Lobular carcinoma tends to “hide” so an MRI was then ordered to see the extent of the cancer.  The cancer was indeed hiding and results came back as stage three.

“As soon as the doctor called me with the test results and said ‘yep, its cancer,’ I already knew I wanted to have a double mastectomy,” said Tara.

Surgery was scheduled in two weeks but then the COVID-19 pandemic hit.  Five days before her surgery they called and told her the surgery was canceled.

“I was freaking out. I was mad, I was scared, I was thinking it’s going to grow,” explained Tara.  “Mine was growing at like a 5% rate so it was really low, but still I was super scared. I didn’t understand why (they wouldn’t do surgery). So, they put me on Tamoxifen.  My cancer is hormone growing so it blocks the hormones from letting the cancer grow any more.   I will take that for the next five years.”

Two weeks went by and she was getting anxious.  She reached out to Representative Greg Davids to see if he could help.  He tried and was denied twice, but two days later a surgeon from Mayo Clinic called her.

“The surgeon said, ‘I get to do two surgeries next week and I picked you because I know you’re having really bad anxiety about not getting in,’” explained Tara.

She was relieved to finally be having surgery but was then told that they would only be doing surgery on the breast that had cancer.  She would have to wait another six months in order to get the other breast removed.  She pleaded her case and was finally granted permission for a double mastectomy.

April 13 her husband Levi dropped her off at the front door.  Because of COVID-19 he was not allowed to go in with her.

“That made me even more scared because I had nobody with me,” said Tara.

When the surgery was over, he was permitted to come in so that they could teach him how to change the drains.  Typically, mastectomy patients stay overnight after surgery.  Because of COVID-19, she was sent home the same day.

“She proved to me that she was the strongest woman that I ever met, alongside my mom,” says Levi, whose mother had lymph node cancer.  “Just to go though something like that with your wife, it really brings things into perspective. It’s just something that I never thought either one of us would go through.”

The first two weeks were the hardest, but once the drains were eventually taken out things got a little bit easier.  One week after surgery she found out that everything had gone well, and that she would not need to do radiation or chemotherapy.  Even after having a double mastectomy she can still develop breast cancer again, but the odds are very low.  She decided against reconstructive surgery and opted for prosthesis instead.

“Depression does set in after surgery.  Just getting used to your body again; feeling like you’re somewhat normal. I have three kids so you have all these things running through your head when this is going on like, am I going to live?  What if I die?  But I overcame that, and I’m doing way better than I was two months ago,” says Tara.  “I’m here. I got to celebrate my 40th birthday.  Even in the hardest times, even with the COVID and having breast cancer, I had to try to keep a positive attitude.  I feel like that is what got me through my darkest days, and there were some dark days.  I prayed a lot and I tried to stay positive.”

The Hershbergers are incredibly thankful for the support of family and friends and also being chosen as the recipient of B&B Olympic Bowl and Restaurant’s annual “Pay it Forward” benefit breakfast. The public is invited to support the Hershbergers at this event held outside (carryouts also available) at their restuarant, 401 Kansas St. NW, Preston on Saturday, July 25 from 8-11 a.m. 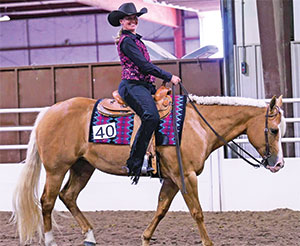 “I feel really honored and blessed that they are willing to do that for us,” says Levi. “It really shows you that there’s still people out there, communities out there, that care about their neighbors and friends and family, especially with what’s going on in the world today.” Tara and her family are very familiar with this annual event, as they have donated in abundance to every “Pay it Forward” breakfast in the past, according to those at the B&B.

Tara is really hoping that some day there will be a cure for cancer, and she also urges people not to put off going to the doctor for their annual screening.  She is very thankful that she went in for a mammogram when she did.