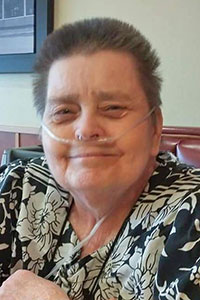 Ronda Gail Blade was born on October 14, 1954, in Riceville, Iowa, to George Blade and Irene Kruse. She was later adopted by Howard Allen Carr. Ronda graduated from LeRoy-Ostrander High School. In 1973, she married Stanley Clayton Leibold and to this union three children were born: Danny, Jenny, and Philip. The two later divorced.

Ronda enjoyed crocheting and would make baby blankets for everybody. She frequently cooked and would make many homemade meals, including homemade noodles and her famous bean soup. Ronda also loved lecturing and taught her kids many life lessons. She will be remembered for her love of music and especially her sweet tooth. Ronda had candies and chocolate stashed all over the house. She was a tough woman and a fighter who never gave up easily. She loved her friends, family, and grandchildren dearly. Ronda would do anything for anyone if she could. She will be deeply missed.

She was preceded in death by her biological parents and her adoptive father Howard Allen Carr, fiancé David Raveill, and brother George Carr.

A Celebration of Life for Ronda will be held at a later date.

Memorials for the family may be sent to Hindt Funeral Home at 316 N Broadway in Spring Valley, Minn.