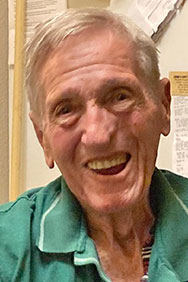 Robert Henry Gossman, age 92, of Harmony, died Friday, September 17, 2021 at his home of natural causes.  Born July 22, 1929, in Preston, Minn., he was the son of James Clifford and Mary Bridget (O’Connor) Gossman.  He graduated from Preston High School in 1948 and attended St. Mary’s College in Winona before serving honorably in the U.S. Navy.

Bob worked in the television repair business, then married Jayne Ilene Finstad of Sunburg, Minn., in 1958.  He then embarked on a career as a computer engineer in several states.  He served as a regional manager for Honeywell before settling back in his hometown of Preston in 1972.  He and Jayne lived in several states, including North Dakota, Minnesota, Illinois, Ohio, New York, Massachusetts and Florida.  They owned the Olympic Bowl in Preston until 1980, then owned a television sales and repair business before retiring.  Bob enjoyed bowling, golf (with five holes in one), reading, traveling and spending time with family and friends.

He was preceded in death by his parents, siblings and wife Jayne.

Funeral Mass will be held Saturday, October 2, at 2:30 p.m. at Saint Columban Catholic Church in Preston, Minn.  Lunch and fellowship will follow downstairs in the church hall.  Family and friends are invited to celebrate Bob’s life later at the B & B Bowl in Preston.