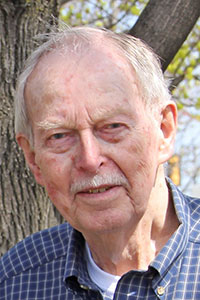 Bob was born July 19, 1928, in Harmony, to Ole and Ethel Viola (Wold) Applen. Bob graduated from Harmony High School in 1946. He served overseas in the U.S. Army Signal Corp during the Korean War. Bob met Norma Johnstone at Northwestern Bell, where they both worked, in Winona. They were married on September 21, 1957. Bob’s long-time career at Northwestern Bell included offices in Rochester, Omaha, and Minneapolis. After retiring in 1984, Bob continued to work various part-time jobs, including Toyota of Burnsville and Schmitt Music. Bob got along with everyone and always had a smile on his face. Bob loved to play the keyboard whenever he had the opportunity. He enjoyed sharing his musical talents with others by performing at community centers and senior living facilities. Bob owned several motorcycles through the years. He and Norma enjoyed getting on their Honda Goldwing and taking rides around the beautiful countryside of Minnesota. Norma’s mother, at age 80, even went with Bob on short rides. Dogs were a big part of his life. He frequently reminisced about growing up on the family farm and playing with his dog Wags. He was the proud owner of both Miniature and Standard Schnauzers. One of them was even a grand champion. More recently, he adopted a couple of dogs from a shelter who needed a good home. They were all his close companions and held a special place in his heart. Bob and Norma felt very blessed to live near their daughter and her family. They created many wonderful memories and loved spending time with them. Bob was proud of his grandsons and adored his two beautiful great-granddaughters. He treasured his time with them.

He was preceded in death by his wife Norma and two brothers, Allan and Maurice.

He is survived by his daughter Kerrie (Paul) Jaeger, grandson Joshua (Michele) Jaeger and great-granddaughters Sarah and Chloe, grandson Jordan (fiancé Natasha Acuña) Jaeger, and brother Dennis Applen. A private service will be held at a later date.