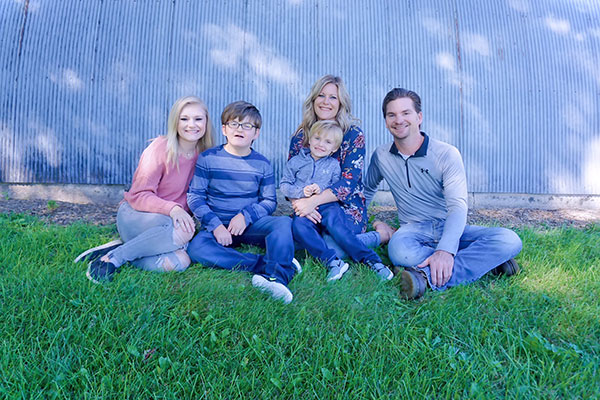 “Rhett is proving to us that he is tough, he is loved, he is happy,” Kayla Carroll said about her son. “We are just doing our best to show him our support.” Rhett, an energetic, determined five-year-old, was recently diagnosed with a Malignant Rhabdoid Tumor or MRT which is a rare childhood tumor that starts in the kidney and other soft tissues. Only about 15 cases are diagnosed each year in the United States. The average age for MRT diagnosis is 15 months old, making Rhett’s case even more rare. “We feel that Rhett has a better outcome because he is older and there just isn’t the data out there to give numbers for his age,” Kayla explained. “We are not looking at Rhett as a statistic.”

Kayla and her husband Bob have three children with Rhett being their youngest. The oldest, Maddy, is 21 and graduated from Fillmore Central in 2019. She is currently attended Nova Cosmetology school. “Maddy is a great big sister and very helpful,” Kayla said. Rhett also has an older brother, Bobby, who is 12 years old and is in 6th grade. Bob is a substation tech for ITC/ULC and Kayla has worked at Fillmore Central for eight years as a special education paraprofessional. This year, she’s still with the school district, but has changed roles, moving into the position of administrative assistant.

Rhett is an adventurous, inquisitive little boy who loves to play outside, ride in the golf cart, swim, go out for ice cream with his big sister, and play his Nintendo Switch. Rhett also loves helping to take care of the family’s chickens, especially the baby chicks. “He is a true joy to be around,” Kayla said, explaining that he’s also very compassionate and affectionate. She described how he loves to create detailed stories with his active imagination and has an impressive memory. “He does not forget a thing, which isn’t always a good thing,” she laughed. “As his parents, there is no saying something and not following through because Rhett will remind us.”

On August 2, Kayla took Rhett to the doctor, as he had been complaining of a cough and a stomachache. Rhett was usually a healthy little boy, but in the past he had had two bouts of bronchitis, so x-rays were taken to check for that and he was put on antibiotics. “Rhett seemed to perk up after he started his antibiotics,” Kayla explained. About two weeks later though, he developed an upset stomach again and just a few days after that, Kayla noticed a bulge on his left side near his kidney. “When I noticed this lump, I loaded him up in the car and headed to the closest ER. I thought it was a hernia,” she said. “Cancer never crossed our minds.” The staff at Regional Health Service of Howard County in Cresco ran blood work that showed a UTI. Kayla’s mom gut wasn’t satisfied with that answer though and thankfully, they listened to her and ran more tests. Rhett had a CT scan and x-rays which showed a tumor on his left kidney as well as lesions on his lungs that had previously been thought to be bronchitis. “My entire world shattered,” Kayla said. “Why would anything think that this almost five-year-old healthy boy had cancer.” Kayla called her husband Bob, but found that she was unable to form the words to tell him what was going on with their son so handed the phone off to the doctor instead.

Rhett was taken by ambulance from the ER in Cresco to St. Marys in Rochester for further tests. “Our worst nightmare, any parents’ worst nightmare, was confirmed,” Kayla said. “There was a tumor and they were 95% sure it was cancer at that point.” More tests were ordered and Rhett underwent labs, CT scans, x-rays, and biopsies. At first the doctors thought he had a Wilms Tumor which is a rare kidney cancer that affects children, but when the biopsy results came back, it was discovered that he actually had a Malignant Rhabdoid Tumor.

One of the first things Rhett did after diagnosis was have surgery to place a port which he will keep throughout his treatment. It will be used for blood draws and to administer chemotherapy. He also had surgery to remove the tumor on his kidney. The surgery was a success although the surgeon ended up also having to take out Rhett’s left kidney and part of his large intestine and color in order to fully remove the 15-centimeter tumor. “Rhett had the best surgeon and from our understanding it is extremely hard to remove the whole tumor,” Kayla explained. After that, Rhett received just half of a round of chemo as his team wanted to start the treatment right away, but also wanted to give him a chance to recover from his surgery. “Rhett is now proving to us, our family, friends and his team at Mayo/St. Marys how resilient, strong and courageous he is,” Kayla said. He recovered from his surgery and initial dose of chemo well and was feeling better in a short amount of time.

Over the course of Rhett’s treatment, he will be admitted to St. Marys for chemo every three weeks and will also be starting stem cell collection soon. His future treatment plan can change at any time, but for now it includes continued chemotherapy, stem cell collection, a stem cell transplant, a possible surgery to remove the lesions from the lungs, and radiation.

“We have so many emotions running through us,” Kayla said. “It’s like living a nightmare that you don’t understand why you’re in it and you can’t wake up. The unimaginable has happened.” This isn’t the Carroll family’s first time dealing with medical issues. Their older son Bobby was born with a heart defect and has had numerous surgeries to correct it. Both Rhett and Bobby will be hospitalized in December, Rhett for his cancer treatment, and Bobby for yet another open heart surgery. “It is hard to believe and wrap our heads around having both of our young sons in the hospital at the same time,” Kayla said. “We are making a plan with our doctors and Rhett’s team and taking it one day at a time.”

Since Rhett’s diagnosis, the Carroll family has been grateful for the support they’ve received from their family, friends, community, and jobs. “We live in a spectacular community. We have felt it with the outpouring of love and support that we have received through cards and prayers,” Kayla expressed. “We are so blessed to have so much love during this difficult journey. There aren’t words to describe how blessed we are. We would like to thank everyone for their support.”

Both Kayla and Bob’s employers as well as their co-workers have been very supportive during this time. Some of Kayla’s colleagues at Fillmore Central – Jennifer Lindstrom, Kelly Biel, Kelsey Woellert, Heidi Brown, Melissa Simonson, and Kate Brinks – even put together a benefit on September 25 to help the family. “Our community is the best,” Kayla said. “We can’t thank all the people enough.”

You can follow Rhett’s journey on Caring Bridge by searching for Rhett Carroll.