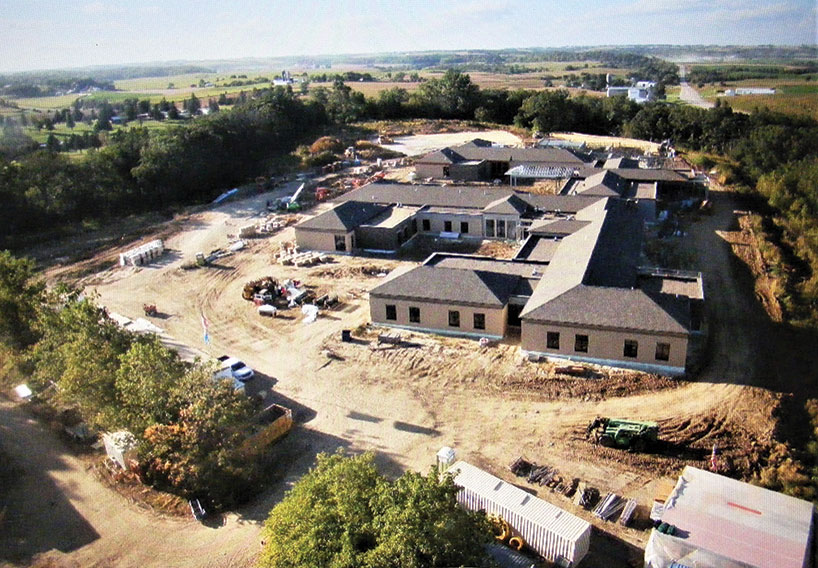 Minnesota Department of Veteran Affairs Commissioner Larry Herke led a virtual meeting on September 21 to provide a quarterly update on the veterans home in Preston. The tentative date for ribbon cutting is after Memorial Day, about June 1, 2023. The Preston facility is about 56% complete. It is the furthest along of the three new veterans homes under construction. The other two are in Bemidji and Montevideo.

The state of Minnesota initially provided $10.2 million for the Preston facility. Local funding along with state funding was matched with federal dollars (65%) in the amount of $22.53 million. In May 2022, a Minnesota Veterans law approved by the legislature provided additional funding for the three new veterans homes. The Preston facility received an additional $6.9 million, which will allow many items that had been cut from the project to be added back, including the main entrance road and a storage maintenance shed.

A local contractor can submit paperwork for the construction of the storage maintenance shed. Derek O’Connor, Knutson Construction project executive, expects it may be completed after the veterans home is open.

Resident applications are being accepted. Applications are available on the MDVA website. Herke suggested working with your county’s Veterans Service Officer. A completed application package can be emailed or sent by U.S. mail. The veterans home will be a skilled nursing facility with 54 beds. Veterans and spouses of veterans may be eligible. They must be Minnesota residents and must meet a clinical need for a nursing home. An admissions portal was opened last week (NewHomeAdmissions@state.mn.us).

At this time, it is estimated that the first 20 residents may be admitted in mid-June 2023.

Herke expressed concerns regarding the hiring of necessary staff and asked for assistance from the community. It has been estimated that when the facility is full there will be approximately 115 employees. The number of veterans allowed into the facility will be directly related to the staff on hand. He warned it may take some time to get to full capacity. “Staffing is critical.”

O’Connor said the veterans home should be substantially completed by March 30, 2023. It should be weather tight enough to heat by the end of October. The new entrance road will likely not be completed until July 2023.

Interviews will be held soon for the administrator position. After the administrator is hired, he or she will be involved in selecting key leaders (director of nursing and two human resources people) and other staff. Applications for staff positions will begin to be accepted in 2023 for most direct care and service positions. The majority of the staff will be hired starting in the spring through next summer.

Preston City Administrator Ryan Throckmorton recognized Gabby Kinneberg, Preston EDA and tourism director, for the efforts she has made regarding the veterans home project. Kinneberg added that they continue to get a lot of donation questions; people call in and ask. Community offers of support are welcome.

The next quarterly meeting will be held in person in January 2023. The administrator will be introduced and recruitment and hiring of staff will be discussed at this meeting. A couple of small groups may tour the facility at that time.