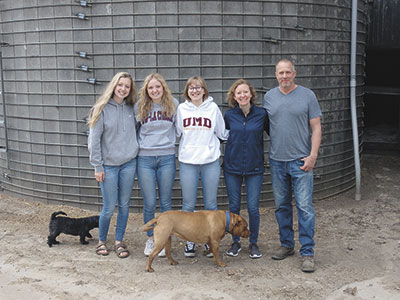 With technology running the world in a variety of ways, one typically doesn’t think about technology and farming.  Robotic systems are becoming the future to feasibly allow small dairy farms to exist. Ben Rein of rural Highland, together with father Steve, wife Amber and children Steven, Jaime, Nora, Kim, and Rachel have automated their family dairy by the use of Lely robots.  Lely is a Dutch company that supplies robotic milking and feeding systems.  In 2007 they started milking 60 cows.  In 2014 they switched from a parlor operation to one Lely milking robot.  In 2015 they decided to add a second Lely robot and added more cows. In 2018 they replaced their free stall barn and put in a Lely automatic feeding system.

Most of the buildings are hoop structures except for the main milking area which is a pole shed.  This building has tunnel ventilation to keep the cows cool on even the hottest days.  They are bedded with sand, which not only keeps them comfortable, but also lessens leg and hock issues.  The cows come in by themselves whenever they want to be milked, and are milked by the robotic system.  This also checks their temperature, their milk quality, and their rumination.  This way one can tell if there is an issue with the animal before it shows any physical signs of an illness.  The cows also get a cherry flavored treat after they are done being milked.

“I think the cows are more calm because they never get pushed around,” says Rein.  “Some cows get milked six times a day so they don’t have a lot of pressure on their udders so they’re more comfortable.  Some of the cows milk 150lbs a day.  I could never do that before in a parlor because we only milked twice a day, and they couldn’t hold that much milk for 12 hours.  Now they come in every four hours and milk 25 lbs a time.” 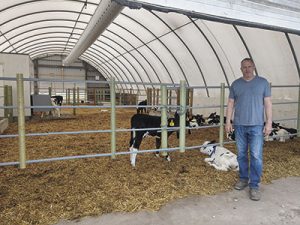 The Lely vector drives around and feeds the cows 24 hours a day. This increases the cow’s milk production because of the frequency of feeding, guaranteeing they get fresh feed all the time.  It also has a sensor that can check how much feed is left from the last time it fed a specific group of cattle.  It follows metal tracks embedded in the cement, but it can also run off of sonar.  Rein can program in the ration that he wants and which group of cattle gets that specific feed and the robot does the rest.  It opens and runs the silos, measures everything with internal scales and adds any protein or other feed that he has programmed in.  He can do everything off of his smartphone and the system will even call him at any time if it has an issue.

The dairy recently retrofitted one of their hoop barns for a robotic calf feeder.  Each calf has a collar with a chip.  When the calf goes in to get milk, the computer reads how long ago they drank and how much they drank.  If it’s been over three hours they get more milk.  They can have up to two and a half gallons per day.  They can feed six to seven times a day which is more natural.

“They’re in a pen all together so they get to run around.  It works a lot better than the individual pens that we used to do,” explains Rein.  “They do a lot better.”

The majority of their cows are Holstein with a few crosses of Montpellier.  They breed half of their cows to Angus and finish out all of the steers.  They finish about 100-150 Angus steers and heifers a year. Dry cows and heifers go out to pasture and there is a separate building for calving.  The first 60 days after the cows calve they get liquid glucose to keep their blood sugar up so they don’t develop ketosis. 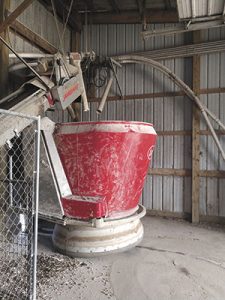 They do have automatic manure scrapers in the barn, but there still is some hand work involved.

The Reins farm about 1200 acres of corn and 250 acres of alfalfa.  In addition, they do some custom chopping and a little bit of custom round baling.

“We grow all of our own feed except for the robot pellet for the feed and some soybean meal,” explains Rein.

Though having a small dairy has it’s challenges the Reins have overcome this with automation, which has in turn kept their farm a strictly family run business.

“I think the robots make it so that a smaller herd can maybe operate in the dairy industry right now because you have fixed cost,” he says.  “It’s a good family life.”