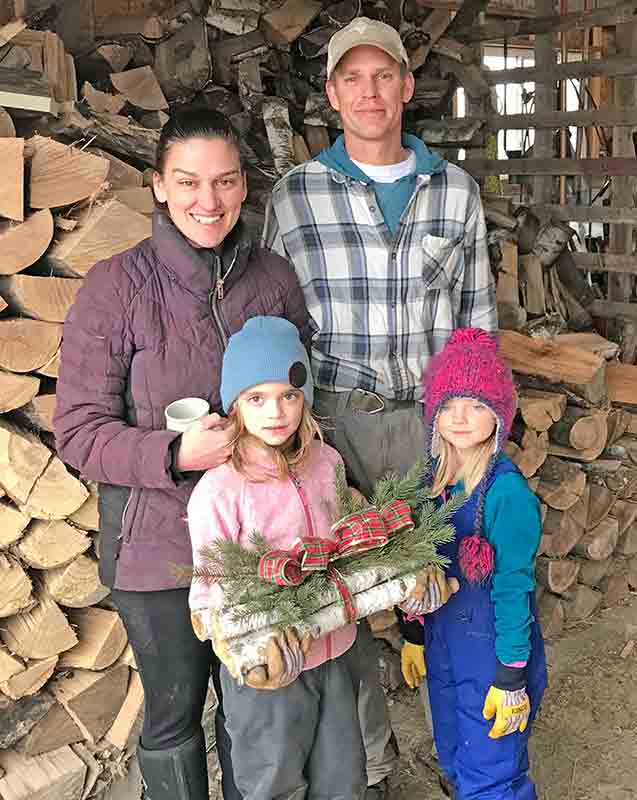 Johnny and Liz Micheel, who live on a farm between Rushford and Money Creek, are interested in those dried up Christmas trees that everyone will soon be taking down. The Micheels raise goats and have found that the goats love Christmas trees! If you’d like to help give the goats a treat, you can bring your trees to the Rushford City compost site and leave them near the sign for Christmas tree donations. The Micheels will pick up the trees from there. You can also drop off trees at the Lewiston Hardware Hank. The Micheels hope to add additional drop off sites in the future.

Johnny Micheel, a forester who works from his home to help private landowners and the state of Minnesota with logging, grazing, and dealing with invasive plant species, does a lot of cedar clearing and brings home the cuttings for the goats. Johnny explained that evergreens are good roughage for his goats. Since goats are prone to parasites, especially in our humid climate, the additional roughage keeps the goats healthy. The goats will thoroughly clean all the needles and bark from the trees. The “naked” tree skeletons are then recycled again and added to a brush pile to be used for habitat for birds and other wildlife. Trees with tinsel or a lot of other items on them are not fed to the goats, but are recycled to the brush pile at once.

The Micheels started their own Christmas tree farm, Crosscut Farms, at their place 10 years ago. Johnny’s family has raised Christmas trees at a farm near Lewiston for over 30 years. Crosscut Farms has been selling a few cut-your-own trees the last few years by word of mouth advertising. Liz, who teaches biology at Minnesota State College Southeast in Winona, also makes and sells Christmas wreaths and other decor at the farm.

Johnny and his wife Liz currently have a herd of 120 goats; the herd will grow in the next couple of weeks when the 25 pregnant does deliver their kids. Johnny has been doing goat grazing with his goats on area bluffs including Perkins Valley, near Peterson at the Rushford Sand Barrens, and Olson Bluff in Rushford for the past six years. The goats eat burdock, wild parsnip, buckthorn, and wild honeysuckle. The Micheels originally got their goats to take care of invasive plants as they managed their own pastures.

The goats are meat goats, a cross of African Savannah, Kiko, and Boer. The billy is rotated every several years to keep a good mix of breed; their current billy will be sold soon and a new billy will be purchased. While the main focus is to have the goats for grazing and land management, the market for goat meat is good. Johnny takes goats to Zumbrota to sell them. Goats are efficient meat producers; even with their hay and grazing diets, goats reach optimum weight of sixty to eighty pounds in eight to nine months. On a corn diet, they would reach market weight even sooner.

The pregnant does have access to shelter in a barn with heat lamps available for newborn kids if necessary. The kids remain in the barn after birth and have a lot of interaction with the entire Micheel family; as a result, the goats are very tame. When the goats are on a grazing job site, they will come running when the Micheels arrive. Does are bred every other year; kids remain with the does through their first year grazing.

The other goats are fed outside; hayfields, after producing three crops of hay, are fenced and the goats graze there as well. Manure from the goats is used to fertilize the hayfields.

Johnny has the goats’ hooves trimmed after a winter on the farm; in the summer, their hooves are naturally worn down on the bluffs.

In addition to the goats, the Micheels raise horses, chickens, and a breed of cattle called Irish Dexters which are used for both milk and meat by hobby farmers.

A small sawmill is used to cut lumber from waste timber for fences on the farm; sawdust is used for horse bedding. Johnny does his best to use everything and care for the environment.

Johnny Micheel declared, “Diversity is a good thing!” Glancing at his daughter Emma playing in the snow, he went on to say that it was neat to raise his children in this environment. Grinning, the Micheel girls, Emma and Abby, shared what they liked best about the goats — for Emma it was that they are cute; for Abby it was their pretty colors.The girls clearly enjoy their life on the farm.

Remember if you want to do your part for the environment, recycle your Christmas tree by dropping it off at the Rushford compost site near the signage or at Lewiston Hardware Hank. The goats will thank you for it!