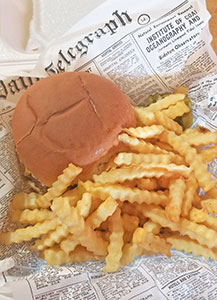 At the newspaper, many of us wear multiple hats.  Paul Trende is our sports coverage guru along with some other reporting, and he also makes sure all of the newspapers make it to each post office location in our coverage area.  When the newspaper grows beyond a certain page count, we have to haul over 5,000 pounds of newspapers in two one-ton vans to get the newspapers delivered.

I am often the helper or back-up for most things, which means I’m not always the best at everything.  But, Paul keeps me in line.

Christmas Eve was one of those days in which we had to split the route into east and west routes.

It was a scramble to get other office work done that morning.  Our newspapers are printed at the House of Print in Madelia, Minn., and they had just endured a blizzard that amounted to 12 inches of snow and power outages.  Fortunately, they pulled through for us.  They were so incredibly dedicated.  When our driver Jim arrived, he said he had been stuck in his truck the night before during the blizzard and the state patrol would not allow him to drive back to the House of Print due to dangerous driving conditions.  So, he slept in the company truck that night.  Serious dedication.

As I was preparing to leave the Journal office in Preston to meet Paul and Jim in Chatfield, it was close to lunch time, and I figured I’d had better get some food for the road.

I called up Shari’s Sports Saloon & Lanes and spoke with owner Shari Allen, ordering a cheeseburger and fries for carry-out.  She said it would be about 15 minutes.

When I arrived to pick up my order, we chatted for a little bit about how things were going with the shutdown.  She’s been fortunate when they’ve been allowed to be open that she has received good local support.

I headed out to meet up with Paul, while we waited for Jim from the House of Print.

I cracked open the container, which included French fries, a cheeseburger, and pickles on the side.  The cheeseburger was delicious, and I noticed it was a handmade patty.  You can tell the difference between handmade and preformed burgers.

The food was great, but what really caught my attention was the newspaper-themed wrap in the bottom of the styrofoam container.  Totally cool, speaking as a lifelong newspaper man.  It was the Daily Telegraph beneath my cheeseburger and fries.  This meal was speaking to me.

OK, for non-newspaper people, this is just a great cheeseburger.  But, for me, it was newsworthy.