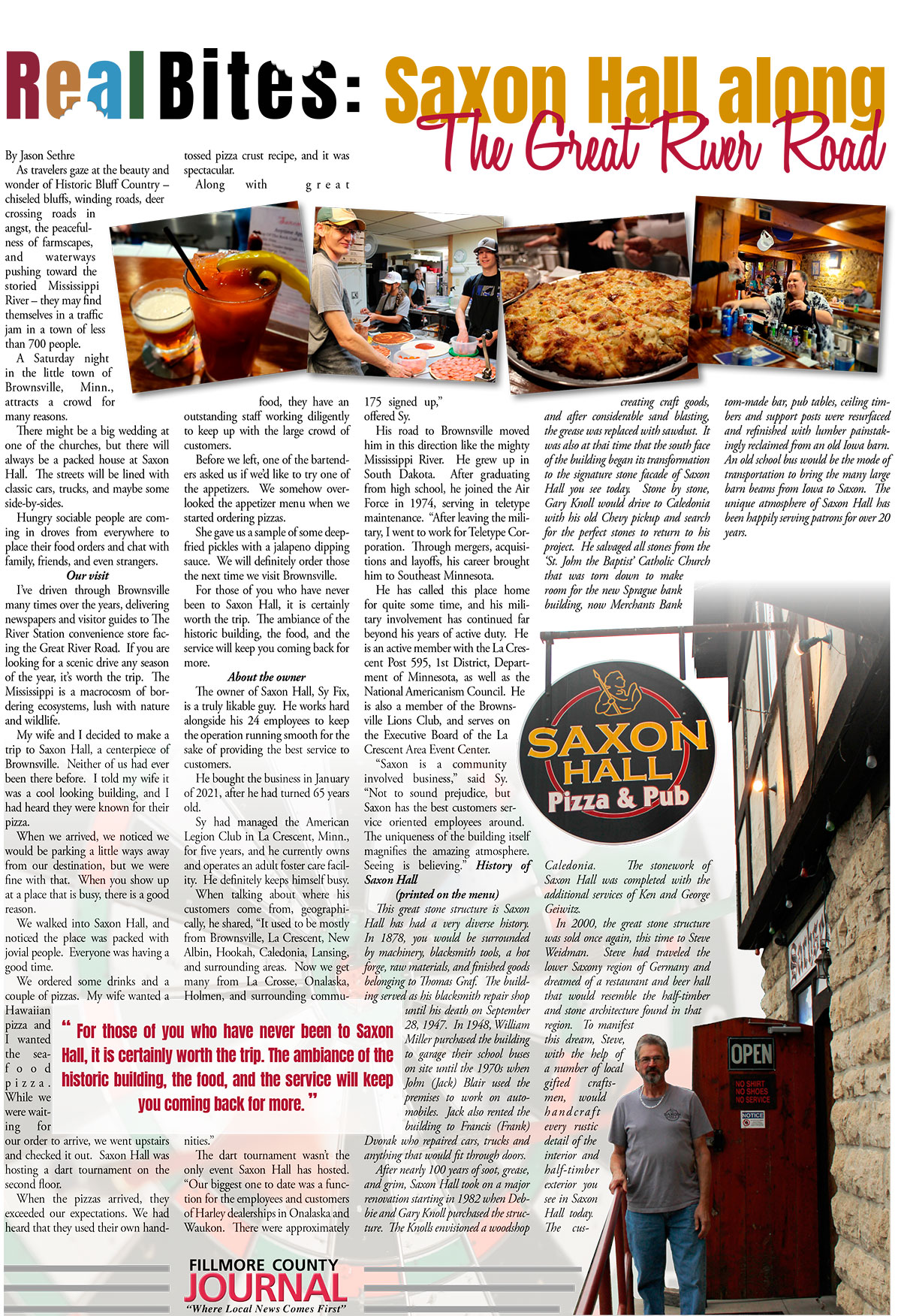 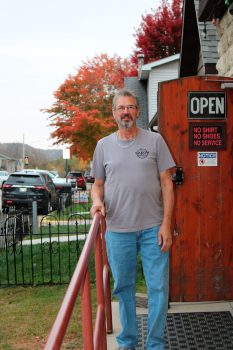 As travelers gaze at the beauty and wonder of Historic Bluff Country – chiseled bluffs, winding roads, deer crossing roads in angst, the peacefulness of farmscapes, and waterways pushing toward the storied Mississippi River – they may find themselves in a traffic jam in a town of less than 700 people.

A Saturday night in the little town of Brownsville, Minn., attracts a crowd for many reasons.

There might be a big wedding at one of the churches, but there will always be a packed house at Saxon Hall.  The streets will be lined with classic cars, trucks, and maybe some side-by-sides.

Hungry sociable people are coming in droves from everywhere to place their food orders and chat with family, friends, and even strangers. 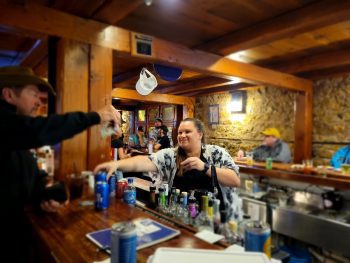 I’ve driven through Brownsville many times over the years, delivering newspapers and visitor guides to The River Station convenience store facing the Great River Road.  If you are looking for a scenic drive any season of the year, it’s worth the trip.  The Mississippi is a macrocosm of bordering ecosystems, lush with nature and wildlife.

My wife and I decided to make a trip to Saxon Hall, a centerpiece of Brownsville.  Neither of us had ever been there before.  I told my wife it was a cool looking building, and I had heard they were known for their pizza.

When we arrived, we noticed we would be parking a little ways away from our destination, but we were fine with that.  When you show up at a place that is busy, there is a good reason.

We walked into Saxon Hall, and noticed the place was packed with jovial people.  Everyone was having a good time.

We ordered some drinks and a couple of pizzas.  My wife wanted a Hawaiian pizza and I wanted the seafood pizza.  While we were waiting for our order to arrive, we went upstairs and checked it out.  Saxon Hall was hosting a dart tournament on the second floor.

When the pizzas arrived, they exceeded our expectations. We had heard that they used their own hand-tossed pizza crust recipe, and it was spectacular.

Along with great food, they have an outstanding staff working diligently to keep up with the large crowd of customers.

She gave us a sample of some deep-fried pickles with a jalapeno dipping sauce.  We will definitely order those the next time we visit Brownsville.

For those of you who have never been to Saxon Hall, it is certainly worth the trip.  The ambiance of the historic building, the food, and the service will keep you coming back for more. 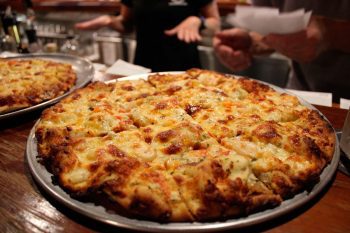 The owner of Saxon Hall, Sy Fix, is a truly likable guy.  He works hard alongside his 24 employees to keep the operation running smooth for the sake of providing the best service to customers.

He bought the business in January of 2021, after he had turned 65 years old.

Sy had managed the American Legion Club in La Crescent, Minn., for five years, and he currently owns and operates an adult foster care facility.  He definitely keeps himself busy.

When talking about where his customers come from, geographically, he shared, “It used to be mostly from Brownsville, La Crescent, New Albin, Hookah, Caledonia, Lansing, and surrounding areas.  Now we get many from La Crosse, Onalaska, Holmen, and surrounding communities.”

The dart tournament wasn’t the only event Saxon Hall has hosted.  “Our biggest one to date was a function for the employees and customers of Harley dealerships in Onalaska and Waukon.  There were approximately 175 signed up,” offered Sy.

His road to Brownsville moved him in this direction like the mighty Mississippi River.  He grew up in South Dakota.  After graduating from high school, he joined the Air Force in 1974, serving in teletype maintenance.  “After leaving the military, I went to work for Teletype Corporation.  Through mergers, acquisitions and layoffs, his career brought him to Southeast Minnesota.

He has called this place home for quite some time, and his military involvement has continued far beyond his years of active duty.  He is an active member with the La Crescent Post 595, 1st District, Department of Minnesota, as well as the National Americanism Council.  He is also a member of the Brownsville Lions Club, and serves on the Executive Board of the La Crescent Area Event Center.

“Saxon is a community involved business,” said Sy.  “Not to sound prejudice, but Saxon has the best customers service oriented employees around.  The uniqueness of the building itself magnifies the amazing atmosphere.  Seeing is believing.” History of Saxon Hall 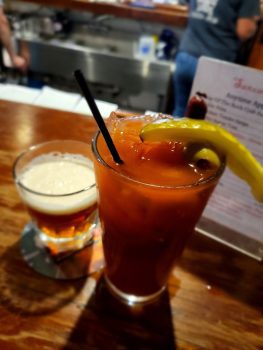 (printed on the menu)

This great stone structure is Saxon Hall has had a very diverse history.  In 1878, you would be surrounded by machinery, blacksmith tools, a hot forge, raw materials, and finished goods belonging to Thomas Graf.  The building served as his blacksmith repair shop until his death on September 28, 1947.  In 1948, William Miller purchased the building to garage their school buses on site until the 1970s when John (Jack) Blair used the premises to work on automobiles.  Jack also rented the building to Francis (Frank) Dvorak who repaired cars, trucks and anything that would fit through doors.

After nearly 100 years of soot, grease, and grim, Saxon Hall took on a major renovation starting in 1982 when Debbie and Gary Knoll purchased the structure.  The Knolls envisioned a woodshop creating craft goods, and after considerable sand blasting, the grease was replaced with sawdust.  It was also at thai time that the south face of the building began its transformation to the signature stone facade of Saxon Hall you see today.  Stone by stone, Gary Knoll would drive to Caledonia with his old Chevy pickup and search for the perfect stones to return to his project.  He salvaged all stones from the ‘St. John the Baptist’ Catholic Church that was torn down to make room for the new Sprague bank building, now Merchants Bank Caledonia.  The stonework of Saxon Hall was completed with the additional services of Ken and George Geiwitz.

In 2000, the great stone structure was sold once again, this time to Steve Weidman.  Steve had traveled the lower Saxony region of Germany and dreamed of a restaurant and beer hall that would resemble the half-timber and stone architecture found in that region.  To manifest this dream, Steve, with the help of a number of local gifted craftsmen, would handcraft every rustic detail of the interior and half-timber exterior you see in Saxon Hall today.  The custom-made bar, pub tables, ceiling timbers and support posts were resurfaced and refinished with lumber painstakingly reclaimed from an old Iowa barn.  An old school bus would be the mode of transportation to bring the many large barn beams from Iowa to Saxon.  The unique atmosphere of Saxon Hall has been happily serving patrons for over 20 years.