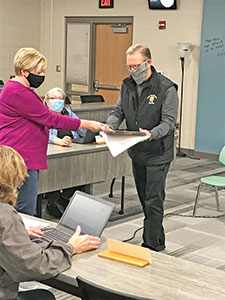 At their regular meeting on December 21, 2020, the Rushford-Peterson School Board officially named the school’s media center the Charles J. Ehler Learning Center. Board Chair John Linder declared, “I can say without hesitation, without you we wouldn’t have gotten it (the construction of the new school) done!”

Ehler humbly replied that they had been “blessed with divine intervention throughout the process.” He went on, “I am deeply proud the good Lord blessed me with the opportunity!”

Ehler’s wife Sharon chuckled, “He was probably just ornery enough to get it done!”

Superintendent Jon Thompson updated the board on COVID information. R-P plans to bring 4th and 5th grade back to in-person learning on January 4, with the middle school and high school returning to the hybrid model followed last fall, on January 11. During the week of January 4, the distance + model will continue for hands-on classes such as shop. Thompson admitted he wanted students to return before the mandatory return date (January 18) because the executive order at that time would require a longer time frame to get all students back at school (only a couple classes would be able to return each week). Currently there are five student COVID cases and one staff member at the school — less than 1% of the school.

Teachers will have face shields available for their protection, along with face masks. Students will eat in the commons area since it provides more space for the classes.

Business manager Toni Oian presented at the mandatory Truth in Taxation hearing during the meeting. Oian noted the school was “really in line” with other districts throughout the state. Forty-two percent of the budget goes to the General Fund, 54% to repayment of district debt, and 4% goes to the Community Service Fund. There is an overall increase of 8.08%.

Eileen Loken attended the hearing to ask about the increase in taxes for the motel she and her husband John own in Rushford. She said she came to try to understand their $1,774 tax bill. She pointed out it had been a difficult year for their business, and they want to keep their doors open, noting the school needs businesses to remain in business so they can support the school. Oian replied that the previous levy had been the lowest in years; with adjustments for the old building drawing to a close, the levy went up; she said she would take a copy of the bill to check with Ehlers (public finance advisors) for clarification for the Lokens.

Following the hearing, the board approved the proposed budget. Supt. Thompson then had comments on the budget. With the unrestricted balance expected to drop to 10.1% of the entire budget, Thompson said according to the strategic plan there might be a need to review the budget and consider making some cuts.

Enrollment at the school dropped by 34 students as students opted out in favor of homeschooling. This resulted in over $221,000 revenue for the school and a drop to 7.6% in the unrestricted fund balance.

Thompson informed the board that operating referendums were more likely to pass if there was something specific you were asking to maintain or keep. Some of his suggestions were the school nurse position, full programming with CTE, and maintaining class sizes. Such a referendum’s impact would be about $110 additional tax for a $200,000 home, to add $143,360 in revenue. If the board decides to pursue a referendum, it would be necessary to have decisions made by the end of the school year in order to include it in next fall’s general election.

A savings might be to continue to offer early retirement with insurance benefits to teachers. Thompson pointed to the potential savings on salary for the experienced teachers, but noted that the expertise of seasoned teachers would be lost. The board decided to revisit the option in January after new members join the board.

•Transferred $42,500 from the General Fund to the Community Service Fund; Thompson noted that spending money on the education of young children is worth it;

•Approved application to the MSHL Foundation (this foundation supplies grants for students to be able to participate in MSHL activities);

•Approved the yearly payment of the general obligation school building payment of $2,080,650;

The next R-P School Board meeting will be the organizational meeting which will be held January 4 at 5:30 p.m. in the forum room.