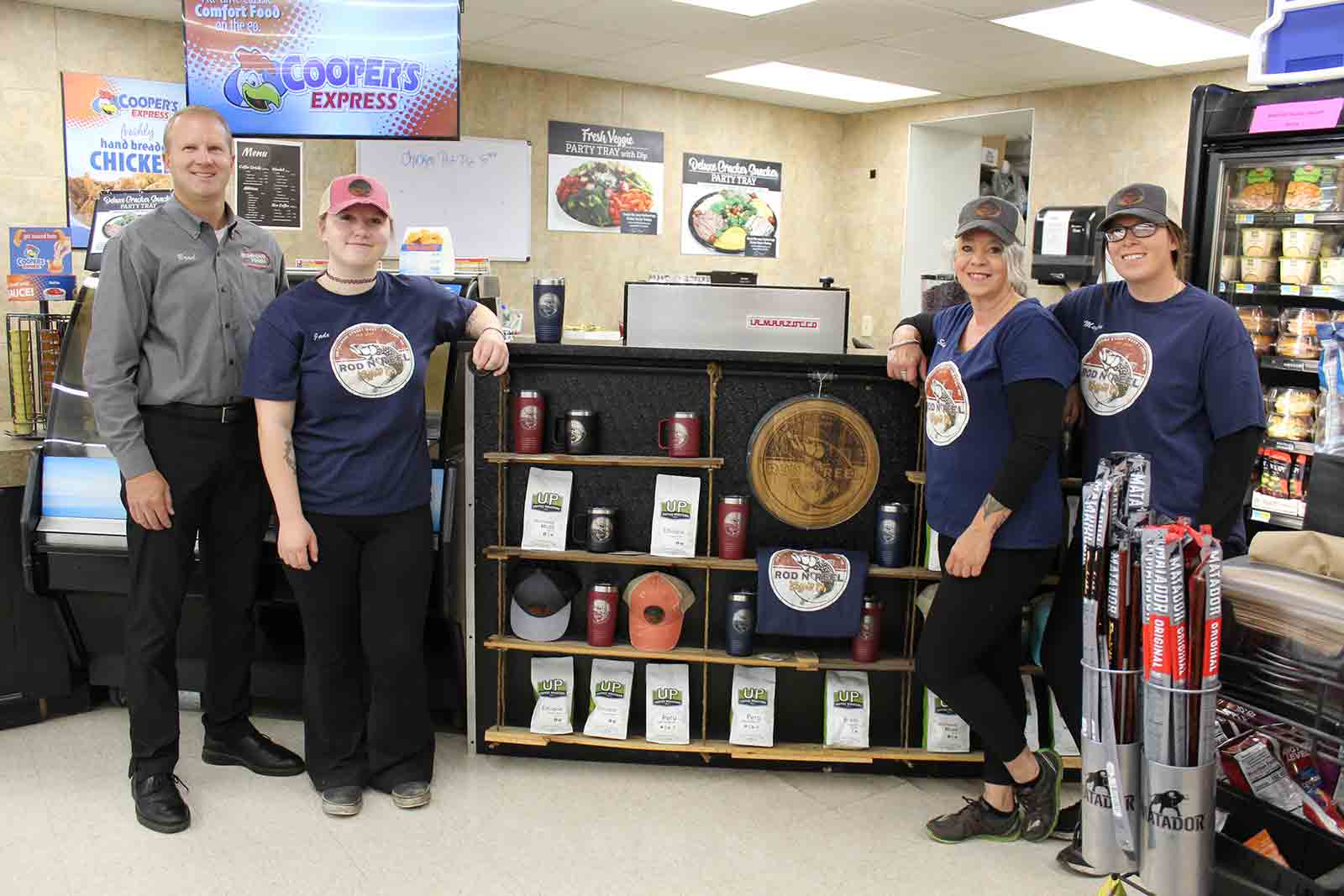 There’s more than just groceries at Preston Foods these days. Now, while you’re picking up pantry staples or ingredients for a quick supper, you can also stop by the new coffee shop, Rod N’ Reel Coffee Co., next to the deli counter and treat yourself to something from its menu.

“We were looking for an opportunity for something our community doesn’t have,” said Brad Hoiness, co-owner of Rush Food Inc, which owns Preston Foods, Harmony Foods, and Rushford Foods. A coffee shop seemed like the perfect addition to Preston, so Rod N’ Reel was born.

Rod N’ Reel Coffee Co. soft opened in May 2022 and has been growing and changing ever since. Hoiness said that they knew it would take some time to build the coffee shop, so it wasn’t marketed very much in the beginning, but now it’s time to take it start pushing it more. “That gave us time to perfect things,” deli manager Sheila Drake commented. “It’s gone well so far. We’ve gotten a lot of good feedback.” Meghan Drake, who is the lead barista for the coffee shop, noted that more and more local people have been stopping in to order coffee as word gets around.

When the coffee shop was first kicking off, Sheila and Meghan attended training at Up Coffee Roasters in Minneapolis to help them get a strong start. They also had some help from Ellie Dahl on setting up the shop and assisting with training. There were some challenges along the way with shipping delays on equipment, finding someone to hook up the water filtration system, and selecting an ice maker that made just the right size of ice cubes. But everything is in place and running smoothly now.

Since opening the shop, they’ve had several sampling days to get feedback from the community on temperature, flavors, etc. That feedback has helped them refine the menu and how they make the drinks. “It’s fun to meet new people and have them try new coffees,” Sheila said. When it came to picking out a name, the employees each wrote down their suggestions and then worked together to pick their favorite. Sheila noted that she especially has enjoyed how Hoiness has given her and Meghan the lead on the creative side of the business. “Brad and Jim (Hoiness), they’re the greatest people to work for,” she said. “They give us challenges and let us try things.”

Hoiness attributes the coffee shop’s success to Sheila and Meghan. “Their willingness to take on such a big project was key,” he said. “Without them, we wouldn’t have tried it.” Preston Foods employees Jade Nelson and Jacob Sonnek are training to work as baristas in the coffee shop as well and their dedication is also appreciated.

Along with the Up Coffee Roasters brand coffee that is offered at Rod N’ Reel Coffee, there’s a variety of other things on the menu to appeal to non-coffee drinkers, such as chai lattes and 100% all-fruit smoothies. “They’re an awesome choice if you’re not a coffee drinker,” Sheila said. There are plans to add hot drinks such as cocoa this winter with a sampling to find out what people like the best.

Rod N’ Reel Coffee Shop will continue to be a work in progress for a while with plans to finish the storefront look on the inside of the grocery store by expanding the wall next to it with the coffee shop’s logo and colors. “It’ll be a store within a store,” Hoiness explained. A drive-through window was discussed, but is impossible logistically, so instead he hopes to be able to install a walk-up window on the front of the grocery store and update the outdoor seating area. The décor for the coffee shop is being refined and recently, Sheila worked with Baukol’s Barrels to build a rustic hanging shelf with a logo sign for the front of the counter to display Rod N’ Reel merchandise and coffee flavors.

Hoiness is also looking into expanding other aspects of the coffee shop and the deli with potentials for curbside pick-up online ordering, delivery etc. “We have the talent, but do we have enough staff?” he commented, adding that they’re looking for more part-time help. He noted that online tools may be a critical aspect of keeping the coffee shop and deli running smoothly, allowing people who come in on their lunch break to get in and out quickly. He is confident that whatever changes come their way, Sheila and Meghan are equipped to handle them. “It doesn’t scare them to try something different,” he said. “They’re not afraid of what the customers might want.”

To find out more about Rod N’ Reel Coffee Co., visit the Preston Foods Facebook page. Preston Foods is located at 105 Fillmore St. W., across from the courthouse in Preston.