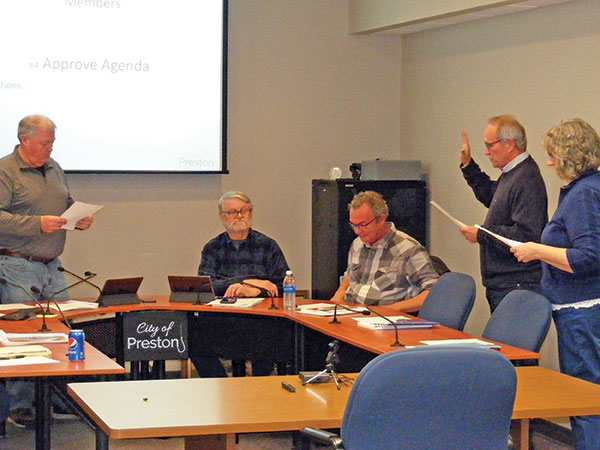 The Preston City Council now has five members seated. Two new members were appointed at the May 3 meeting. Three residents had offered their services through letters of interest. Flossie Schultz and Steve Hall were appointed to fill the seats, until the end of 2022. The seats were left vacant by the passing of David Collett and the resignation of Robert Maust.

Jon Ebner had also submitted a letter of interest. Councilman Dean Aug nominated Ebner. Councilman Charles Sparks noted his concern of a possible conflict, in that Ebner’s spouse Debra Ebner is the office manager for Preston Public Utilities. Jon Ebner is also the vice-chair of the Preston EDA board. A motion to appoint Ebner failed. Sparks, when nominating Schultz, commented that the addition of a female to the council was favorable. Mayor Kurt Reicks noted all three candidates for the positions were very good.

Three positions will be up for election come this November’s general election, including the two newly appointed positions and Sparks position.

Several residents attended the public hearing for the proposed Maple St. and Circle Heights Dr. improvements. City Engineer Bret Grabau explained the city was considering a few side projects in 2022, like parking lots, that are not assessable along with the two above projects that are assessable.

The Maple St. project will likely not need to have any utilities replaced. This project is expected to include removing the existing bituminous surface, re-shaping the underlying aggregate base and paving with a new bituminous base and wear course. The estimated cost is just under $75,000. The 40% assessable portion could be just under $27,000 or about $2,500 per property owner on that street.

The Circle Heights Dr. improvement would require the reconstruction of portions of the streets leading to the Branding Iron Restaurant and residences up the hill. Grabau said he did not believe there is sufficient aggregate base under the roadway. Also, portions of existing curb and gutter will need to be replaced. The estimated cost of the project is about $290,000. Three residential properties and one commercial property will benefit from the improvements. They will not be required to support 40% of the cost, which would total about $114,000. Grabau proposed a fairer assessment which would be about 17% of the total cost of the improvements. He used average assessments for 2021 improvements and added 10%. Residential owners could be responsible for about $8,000 each and the commercial property owner could be responsible for about $26,500.

One property owner asked if a “dead end” sign could be placed at the entrance of Maple St.  Reicks said they will look into that.

Grabau added if the city council goes ahead with the projects the actual assessment amount will be set in the fall when they have actual construction costs. There will be a public assessment hearing in the fall.

A resolution was adopted authorizing the ordering of plans and specifications for the Circle Heights Dr. improvement.

The unassigned general fund reserves equal 66% of the annual general fund expenditures. A minimum of 50% is suggested. All debt service funds are being adequately funded and all outstanding bonds are being paid on a timely basis.

The audit was approved as presented.

Other Business in Brief

•Craig Britton, Widseth, representing Robert Doherty, discussed the proposed preliminary plat for Golfview Doherty First Addition subdivision to be located on the east side of Golfview Dr. south of Trunk Highway 16. The subdivision is proposed to consist of eight single family residential lots. A preliminary plat application hearing was held at the April 27 Planning & Zoning Commission meeting. The preliminary plat was approved as recommended by the Planning & Zoning Commission with two conditions, the addressing of Parkland dedication and a complete site grading plan. Britton noted the final plat is being prepared.

•Public Works director Jim Bakken recommended the city hire a call center to handle after hours emergency calls, which have been handled up to this point by the Fillmore County Sheriff’s Office. Preston is one of the last cities to have relied on the sheriff’s office for that service. Bakken recommended hiring Combined Response Cooperative (CRC), which can handle a large number of calls in an emergency. The total annual cost is $6,252; the cost will be split 75% utility and 25% city. The city’s cost will be $1,563 annually. The Utility Commission had already approved paying for 75% of the cost. The hiring of the call center was approved as recommended.

•A Local Small Cities Development Program application submitted by Martin & Kathleen Rinnhofer (Urban Artifacts) for $10,000 was approved as recommended by the EDA. The application was to help with the installation of a new roof to stop water leakage. The total cost is expected to be $22,284.25 with $12,284.25 coming from private funds.

•Rick Grooters was hired for summer help in 2022, as he has volunteered to work 20 hours per week. No high school or college students have applied for a 40 hour per week job as a summer helper this year.

•The next city council meeting will be held on May 16.