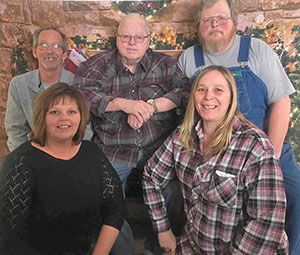 “They loved spending time with everyone close to them and I think Christmas was just a time that brought that all full circle,” Shelia Marzolf reminisced about her mom Carol Severson and sister Jodi Severson. In June of 1997, both Carol and Jodi tragically lost their lives in a car accident on their way to Rochester to do some shopping. Jodi’s eight month old son Jordan Quandahl was in the car with them, but thankfully he survived the accident.

After the funeral, the family sat down to decide what to do with the memorial money. As Carol had always loved Christmas, her husband Larry Severson suggested donating a Christmas star to the City of Preston in Carol and Jodi’s memory. “He knew it was something Mom would’ve loved to have done if she had been here,” Sheila said. “It was a gift for the community because everyone was so supportive after losing them.” Larry was good friends with the city administrator at the time, Fred Nagel, and asked him if it was something the city would be interested in doing. They were in favor of the idea, and Preston Ironworks was commissioned to create a five-pointed star to go on top of the town’s water tower. “It was a great star, but it was hard to maintain,” Sheila explained. A few years later, Scott Wilson designed a new star that folds, making it easier to maintain and change the bulbs on it. That star still lights up the top of the water tower every year above Preston, seeming to appear out of the dark sky just like a real star. 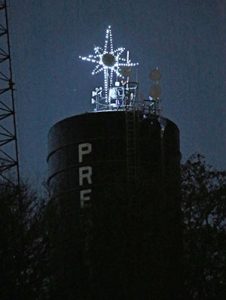 The family also donated a cement picnic table to the city which sits at the Trail Head, a plaque with Carol and Jodi’s names embedded in it. “My mom was definitely an outdoorsy person,” Sheila explained, adding that the family camped in Brownsville along the Mississippi River for many years.

When Carol and Larry got married, they each had three children from a previous marriage. As the seventh and youngest child in the family, Sheila’s memories of Christmas were probably a little different than her siblings’ as they grew up and moved out to start their own families. “I don’t remember much about the earlier years when everyone lived at home, but I remember my dad making breakfast for us and Mom being busy with making Christmas dinner for everyone. My brothers and sisters and their families would come home for Christmas dinner and then presents and just simply spend time all together. Family was so important to Mom and Jodi and just being together was the best for all of us. The house was completely decorated,” Sheila remembered. “There wasn’t a nook or cranny that didn’t have something Christmas about it.”  On Christmas Eve, the family would attend the service at Christ Lutheran Church. “My mom always loved that candlelight service and faith played a big role in her life,” Sheila said. Starting on the weekend after Thanksgiving until after Christmas, the family would frequently drive around town to see the Christmas lights, sometimes visiting surrounding towns as well.

“She (Carol) loved the family being together. Family meant a lot to her,” Sheila said. “She really enjoyed her kids and her grandkids.” Sheila explained that her sister Jodi was just like her mom and went all out for Christmas with lights, decorations, and family time. “She loved being with family,” she said.  Jodi’s daughter Kasondra has fond memories of her mother and grandma at Christmas time as well. “There was never a shortage of love from Grandma and my mom, and if you were ever around them you felt that love. Gathering as a family at Christmas was so special to Grandma Carol, from the food we shared, the presents she bought and wrapped for everyone, the baking, and most importantly the love and memories we created as a family. Now our family holds those many memories and the love Mom (Jodi) and Grandma Carol gave to all of us close to our hearts not only at Christmas but every day.”

It’s been 24 years since the accident, but Tony Severson, Kelli Pierce, Shawn Severson, and Sheila all continue to carry on the traditions started by their mom, Carol. “We still, as a family, get together on Christmas day,” Sheila said. For them, the highlight of the Christmas season is seeing the Christmas star being lit up. “It feels like they’re watching over us,” Sheila explained. “It’s their star. It does have a soft place in all of our hearts to see it and have it there.” Jodi’s sons Ryan and Brandon live in Preston, son Jordan, who is in the Marines, is stationed in California, and daughter Kasondra lives in Eyota. They all enjoy seeing the star each year as well and Kasondra makes special trips to Preston several times each year to see it with her two daughters, explaining, “My hope when others see the Preston Christmas Star is that they take a moment to reflect on life’s beauty, love, and memories dear to them while the beauty of the Star shines from above.”